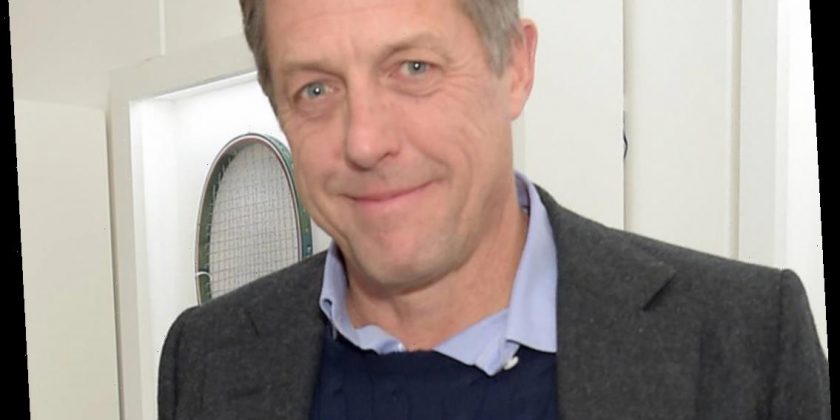 During a conversation with Stephen Colbert, Hugh Grant reflected on his recovery from COVID-19 and the symptoms he experienced.

Hugh Grant and his wife Anna Eberstein have recovered after battling coronavirus early on in the pandemic.

During a virtual conversation with Stephen Colbert on Tuesday, Nov. 10, The Undoing star revealed that he experienced symptoms in February. "It started as just a very strange syndrome where I kept breaking into a terrible sweat," the 60-year-old said on The Late Show. "It was like a poncho of sweat, embarrassing really. Then my eyeballs felt about three sizes too big and this…a feeling as though an enormous man was sitting on my chest, Harvey Weinstein or someone."

Then, Grant realized he couldn't smell anything while walking down the street and he started to "panic."

"By then people were just starting to talk about this as a symptom," he told Colbert. "And I started sniffing flowers, nothing. And you get more and more desperate. I started sniffing in garbage cans. You know, you want to sniff strangers' armpits because you just can't smell anything."

"I eventually went home and I sprayed my wife's Chanel No. 5 directly into my face," Grant continued. "Couldn't smell a thing, but I did go blind."

Grant also shared with Colbert that he has antibodies after recovering from COVID-19.

Trista Sutter Says Producers Had Storylines for Her Bachelorette Party

Inside the Truly Bizarre Aftermath of Brittany Murphy's Sudden Death

Jason Momoa Was "Completely in Debt" After Being Killed Off GOT

"I've had an antibody test, only a month ago," the Love Actually actor said. "I still have those antibodies, so I know that's what it was."

Grant is just one of many celebrities who have shared their experience with coronavirus. You can see all of the stars—including Tom Hanks, Rita Wilson and Dwayne Johnson—who have opened up about their battle with the virus, HERE.

Watch the video above to see Grant talk more about his symptoms and how he's spending time at home with his family.