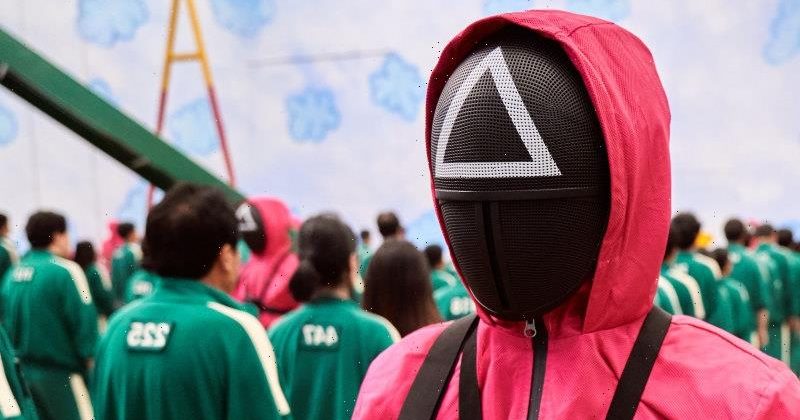 Even Ted Lasso considered therapy in 2021. It was that kind of year on scripted television. In the second season of Apple TV+’s now much-loved hit, the American wherewithal in London played by Jason Sudeikis had to face up to his charges, professional football players in the English Premier League, preferring the insight of a sports psychologist to the cheery aphorisms of their smiling coach. AFC Richmond may have been relegated, but the collective mental health of the dressing-room got promoted. It was a recurring screen trade-off.

I watched so much television in 2021 that, by the end, it felt like the television was watching me. The feedback loop between what we sense and what we watch was strong this year, especially when the medium picked up on the pandemic energy – repressed, isolated, and increasingly out of kilter – that had become the unexpected status quo in 2020. Even watching Netflix’s Squid Game and Binge’s Vigil, two shows with furiously fast plot points, you still got the shackles of anguish and locked-down environments, be they a murderous underground games arena or a British nuclear submarine. 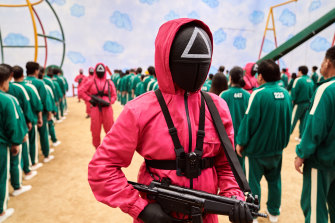 The furiously fast plot of Squid Games carried reminders of the anguish of lockdowns.Credit:Netflix

The series that were meant to be constrictive, such as Binge’s love-lies-bleeding chamber drama Scenes from a Marriage, with Jessica Chastain and Oscar Isaac taking studiously calculated swings at the emotionally knotty script, teetered on the verge of being overegged. It was easy to go too far in 2021, like an echo of the middle of last decade, when there was a flurry of ever-more-bleak anti-hero dramas following Mad Men and Breaking Bad. COVID-19 didn’t always make for a subtle thematic source.

Curiously, the shows with therapists as key characters, including Apple TV+’s star-studded – or star-dudded, thanks to Will Ferrell’s square peg in a round hole performance – The Shrink Next Door and Amazon’s lockdown mystery Nine Perfect Strangers, headlined by Nicole Kidman’s mysterious seer, quickly fell flat. Healing felt like a private choice, sometimes just a by-product of getting by. On Stan’s casually wrenching Canadian comedy Sort Of – near the top of my criminally underseen list – Bilal Baig’s non-binary millennial Sabi got sustenance by just helping others through their difficult days.

Humour mattered, in what were nominally dramas. HBO’s trifecta of Mare of Easttown, The White Lotus and the returning Succession all had barbed senses of humour that drew blood. Mare of Easttown, with Kate Winslet as a phlegmatic Pennsylvanian police detective on a murder case, was about communities peppered with holes, a tower with barely enough pieces left to hold it up. The only way to address loss was to eventually laugh through its impact, otherwise you’d be left with a character pouring out their heart and then getting shot dead. 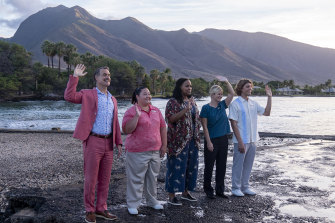 Apart from the Canberra delusions of Insiders, The White Lotus was the most excruciating show of the year. Mike White’s caustic social commentary was about the Americans literally going on holiday after the Trump years to recharge themselves or possibly start afresh. Played by a golden ensemble cast – the honours go to Australian expat Murray Bartlett as an increasingly discombobulated resort manager – the privileged guests had nowhere to hide from their own failings. Trump was gone, their ease with quietly milking entitlement wasn’t.

It wasn’t altogether surprising that the programs where the characters gained back lost ground often stemmed the most unlikely of connections. Instead of family or a couple in love, the bittersweet Stan comedy Hacks focused on the bond between employer and employee – Jean Smart’s legendary comic and Hannah Einbinder’s joke writer – while Disney+’s Only Murders in the Building broke through a generation gap to unite Steve Martin and Martin Short with Selena Gomez in a deliciously enjoyable murder mystery. Netflix’s flaunting fashion biography Halston tried for the same connection halfway through – engineering a bottle episode with Ewan McGregor’s haughty designer and Vera Farmiga’s scent expert. 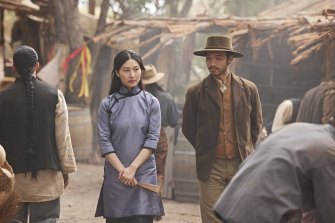 Mabel Li and Yoson On in New Gold Mountain, which looked at Australian history through a new lens.Credit:SBS

But if the present was a patchwork of frayed emotions and halting fixes, then the past was seen anew. Both the ABC’s The Newsreader and SBS’s New Gold Mountain looked back on eras of Australian history defined by convention – whether television news in the 1980s or the goldfields of the 1850s, respectively – with welcome new lenses. The past was pliable, and voices from outside the mainstream could be heard, amplified by creative choices that emphasised the traditional norm had been supplanted.

There were so many other shows, so many relevant themes in 2021, although worryingly I suspect that it’s the Coffin Flop sketch from Netflix’s I Think You Should Leave with Tim Robinson that might endure longest. If anything, what we watched this year told us what we truly took comfort in. We laughed with horrified relief, followed those who went to their depths, or hugged those who cheered us up. I have to conclude with Netflix’s City of Ghosts, an animated mockumentary about a group of children helping the many spirits of Los Angeles. This tender, bespoke show summed up what we wanted most this year: a fresh start.