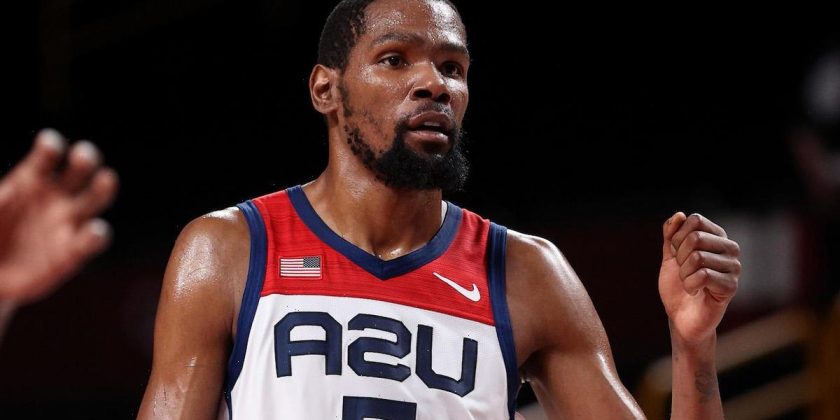 After a rocky start, Team USA’s men’s basketball team will compete for gold Friday against France. The star-studded men’s team struggled early in exhibition play but has recently found its footing, largely thanks to the world-class scoring of Kevin Durant.

Team USA will face its toughest challenge in France, which is made up of NBA players Rudy Gobert, Evan Fournier and Nicholas Batum. If they win, it will be the fourth consecutive Olympic Games that Team USA men’s team wins gold in the event. (They previously won in 2008, 2012 and 2016.)

On Thursday, Team USA defeated Australia 97-78 in the semi-finals. The U.S. trailed at halftime but Durant finished with a game-high of 23 points, nine rebounds, two assists and two blocks. He’ll need another big performance, and his teammates will need to shoot much better for three if Team USA wants to continue its streak.

How to watch Team USA men’s basketball vs. France

Earlier this week, Durant became the all-time leading scorer of U.S. men’s basketball at the Olympics, surpassing Carmelo Anthony. If Team USA wins gold, he’ll become the second player behind Anthony to take home four gold medals in the sport. After leading his team to defeat Australia, he spoke about the team’s recent success.

“We knew teams were going to come out fast and hit us with a nice punch and see how we respond,” Durant told reporters. “I think a lot of teams are expecting us to fold early so we stuck with it, stuck with our principles, made a couple of scheme switches and we were able to get some momentum going into the half and guys came out with that intensity.”

“We made shots as well, so everything fell in line for us in that second half. That’s who we are.” 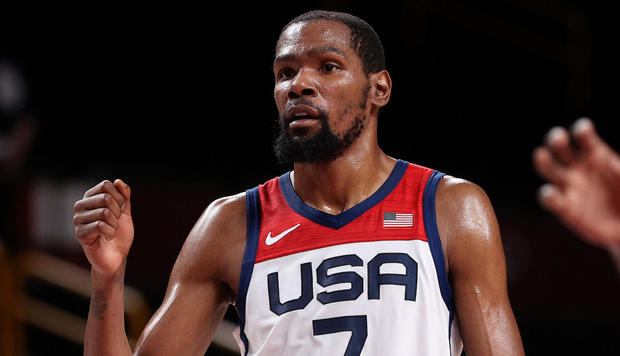 Last week, France snapped Team USA’s 25-game winning streak in a stunning 83-76 defeat. Fournier, who plays for the New York Knicks, led France with 28 points and was undeniably the best player on the court that day. Fournier shot 50% from the field and knocked down four three-pointers.

Gobert, the Utah Jazz center with three NBA Defensive Player of the Year awards, racked up 14 points and nine rebounds for France.

The best player on Team USA was Jrue Holiday, who joined the team late after helping the Milwaukee Bucks win their first NBA championship in 50 years. Holiday scored a team-high of 18 points, with 12 coming in the fourth quarter. Some of the team’s key players — Kevin Durant, Zach Lavine and Devin Booker — tallied more fouls than made shots, which ultimately led to Team USA’s defeat.

“This is the first time I’ve been on this stage; you always want to make an impression. I just came out and played as hard as I can,” Holliday told reporters. “We had a chance. France is a good team. They play very, very well together. They were consistent throughout the whole game.” 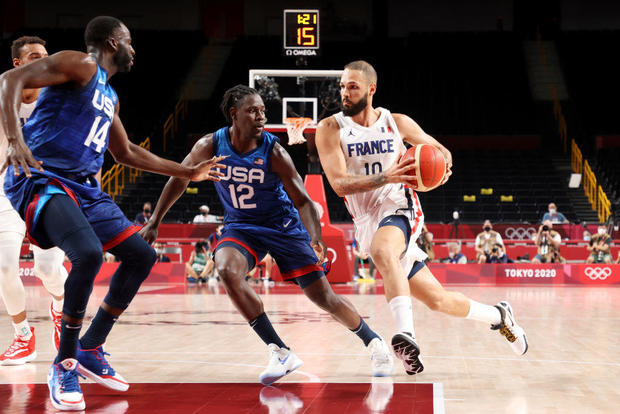 The French team passed a major test on Thursday, defeating Slovenia and the red hot Luka Doncic, 90-89. Fournier eventually fouled out of the game but continued his shooting streak with 23 points. In the tournament, Fournier has averaged 19 points a game. But it was Batum who was praised for his late-game heroics after blocking Doncic in the final seconds of the match to seal the win. Batum finished with three points, five rebounds and four blocks.

“I always dreamed of playing in this type of game,” Batum said, the Associated Press reported. ” I had to make this play — this play — for my team. And I did it.”

Odds for Team USA vs. France

Meanwhile, the over-under for the final is currently at 177.5 total points.