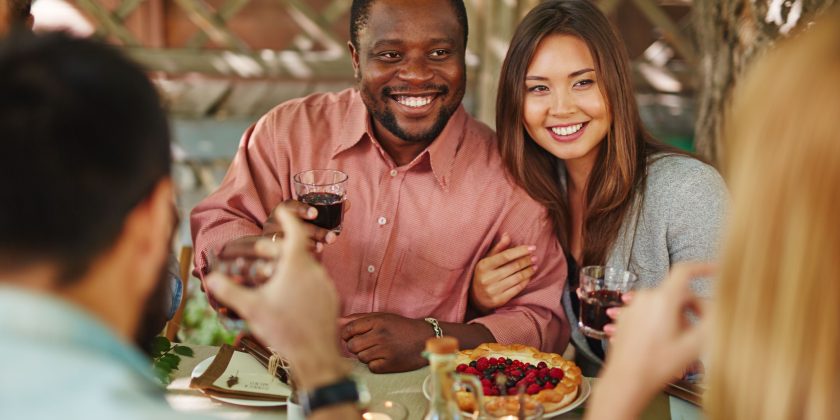 Your first Thanksgiving with your partner’s family is basically a first date with a bunch of strangers, except that they’re allowed to ask you hurtful questions like, “So how much does a freelance writer make in a year?” with impunity.

Set yourself up for success with these seven tips.

When you’re on the freeway you’re allowed to drive at the speed of traffic, and when you’re at dinner you’re allowed to drink at the speed of the table. You just don’t want to be the person hitting the wine at 100 mph when everyone else is going 80 mph. At the holiday party at my first job I asked an older, wiser colleague if it was safe to get toasted, and he said, “Just never be taller than the king”—never get drunker than the boss. Get a lil’ buzz going, just don’t get drunker than the hosts.

In most families, the youngest and oldest members suffer some degree of neglect. Everyone in the family feels guilty about this, but not guilty enough to spend an hour playing Mouse Trap with a five-year-old who plays by her own rules. Again, it will feel counterintuitive to turn your attention away from your girlfriend’s parents, but they’ll be impressed by your ability to withstand a Thanksgiving dinner worth of grandpa’s made-up war stories. Later they’ll talk about how you were “raised right.”

Even in the wokest families, I’ve noticed that invariably, it’s women who start clearing plates after dinner. There’s nothing more irksome to me than a guy who leans back and has a macho chat with my dad when the women leap up to do the dishes. I understand the impulse to impress the patriarch—I saw Meet the Parents, too—but by skipping the dishes you’re alienating every woman in the family, including your girlfriend. Do not just say, “Can I help?” because the answer will be no. Instead, as soon as someone initiates plate-clearing, grab everything you can and make a break for the kitchen. Start tackling whatever is in the sink—you don’t want a passive job like drying, you want to be elbow-deep in turkey water—and don’t stop until every dish is done.

Take your cues from your partner. If she’s initiating PDA, go with it. If she’s not, she’s probably uncomfortable getting macked on in front of her parents. Discuss this beforehand. I, for example, reject PDA in front of my family—for my sake as much as theirs. As soon as I am under my parents’ roof I am anti-horny, not least because I am almost always really, really full. My flannel PJs are my temple garments, my cozy socks are my purity ring. A chaste peck on the cheek is all you’re gonna get.

It’s old-fashioned, but that’s because it has always worked: Bring a gift. Ask your partner what kind of wine her parents like, and spend at least $18 on a bottle. (Untested theory: Wine people can tell when a wine costs less than $18, but beyond that they’re just bullshitting.) Present it to them as soon as you arrive, so that you don’t have to whip it out in a transparent cry for praise later. If the hosts aren’t drinkers, buy them something generic and inoffensive, like a candle.

Thank you so much for opening your home to me this Thanksgiving. I had so much fun [playing eight rounds of tag with the five-year-old even though I was extremely full/learning about refrigeration from the unbearably dull uncle/doing dishes]. I feel so lucky to have met [correct name of partner] and I can see where she gets her [intelligence/sense of humor/rockin’ ass]. I hope to see you again soon! Best,