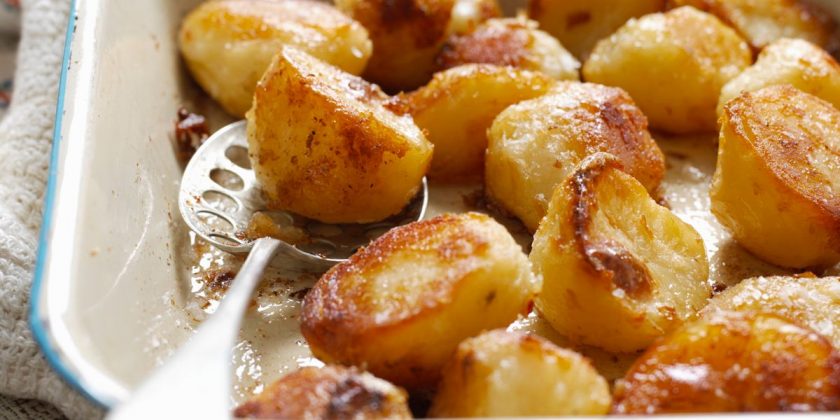 Most of us reckon we can absolutely nail roast potatoes, but although we have our tried and tested methods sometimes they’re just not as good as they were last time.

Every now and again, what you hoped would be a perfect tray of roasties (crispy on the outside, fluffy on the inside), has been a little disappointing.

And with Christmas just around the corner, the last thing you want is less-than-perfect potatoes on the day – especially if you’ve got family to impress.

Luckily for you, none other than Heston Blumenthal has some top tips on how to get it right – and we reckon he knows his stuff on this one.

Here’s three essential tips for roasting your potatoes to perfection, and they’re so simple that there’s really no excuse for getting it wrong next time.

Number one, make sure you parboil those badboys.

Most cooks know to boil before roasting. Season the pan, leave the spuds to cook, then throw them in a baking tray with oil or fat, salt, pepper, maybe a sprig of rosemary and a couple of garlic cloves.

But there’s a major issue when it comes to timing, according to three Michelin-starred chef Heston Blumenthal.

Heston advises leaving potatoes in to boil for 20 minutes before roasting – which is longer than most of us do as it almost cooks them through.

He also suggests putting the peelings in the cooking water to improve the flavour. Good idea.

Number two, you need to scuff up those potatoes as you drain them to make sure they go extra crispy.

You could do this by giving them a bit of a shake in the colander, but don’t do it too hard.

Basically, you want them to crumble just a little, so that the oil or fat covers a wider surface area and penetrates deeper into the potato.

If you really want that crispiness, this genius tip is guaranteed to get results – and it may seem a little unusual.

What you need to do is score the potatoes with a fork. This creates ridges and grooves, perfect for golden, crispy goodness.

Thirdly, Heston also says that metal baking trays are best. Avoid glass or Pyrex. Metal is a better conductor, so the oil will get hotter faster, which means a crispier exterior.

Have you got a hot tip for perfect roast potatoes? Let us know in the comments!

Have a homemade Christmas