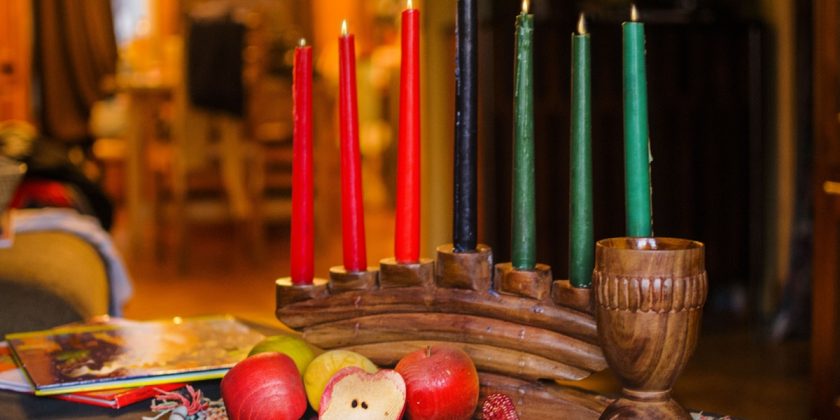 With the days until Christmas winding down, it’s easy to get caught up in the holiday shuffle of cookie-making, tree decorating, and all kinds of other rich, festive traditions. But what about Kwanzaa? While Christmas has more or less become a secular holiday celebrated by millions of people, Kwanzaa may not seem nearly as popular or widely celebrated, which prompts the question: How many Americans celebrate Kwanzaa? Get ready to be surprised, because the reported number is probably not what you’d expect.

For one thing, the range can seriously vary. In 2009, Keith Mayes, author of Kwanzaa: Black Power and the Making of the African-American Holiday Tradition, told the Associated Press that based on his research, he estimates 500,000 to 2 million Americans celebrate Kwanzaa. On the other hand, a 2012 study from Public Policy Polling found that 4 percent of participants said they "primarily" celebrate Kwanzaa during the holiday season (more than Hanukkah, but way less than the almost 90 percent who celebrate Christmas). If that 4 percent is considered representative of America, which had a population of about 314 million in 2012, that would be some 12.5 million celebrants.

The holiday was created in the 1960s by Maulana Ron Karenga, a professor at California State University, Long Beach, as a way to celebrate African-American culture and community, according to the Associated Press. But while it saw a boom during the black power movement of the ’60s, by the 1990s it was on the downtrend, the news source reports. Younger people may have mixed experiences, with some not celebrating the holiday simply because they’ve never been exposed to it.

Unlike Christmas or Hanukkah, Kwanzaa is a non-religious holiday, but that doesn’t mean it’s less meaningful. Beginning on Dec. 26, those people will celebrate culture, family, and community over the course of seven days (until Jan. 1). Each day of Kwanzaa is dedicated to one principle, which are: Umoja (unity), Kujichagulia (self-determination), Ujima (collective work and responsibility), Ujamaa (cooperative economics), Nia (purpose), Kuumba (creativity) and Imani (faith). At night, celebrants light a new candle on a seven-branched candelabra called a "kinara," as noted by CNN. There are seven candles in total, which range in color from black to red to green, which represent people of African descent, the struggle, and the land and hope for the future.

But like any occasion, some families celebrate differently: some cook extravagant meals and others exchange homemade gifts. While the holiday is all about African culture, PBS News reports that people of other races and ethnicities are welcome to join the festivities, so whip out those phones and start sending or requesting invites! Here are some ways you can personally celebrate Kwanzaa if you’ve never done it before.

Though it may not be considered a mainstream holiday (at least not anymore) there have been a few times where public figures have paid homage to the occasion. In 2017, President Donald Trump issued a statement calling it a "joyous time."

In 2015, Barack and Michelle Obama released a warm statement to Kwanzaa celebrants, which said:

And in 1997, President Bill Clinton shared a statement emphasizing the values that all Americans find in culture celebrated during Kwanzaa.

With the days until Dec. 26 inching forward, get ready to see similar messages and really special celebrations. Happy Holidays!