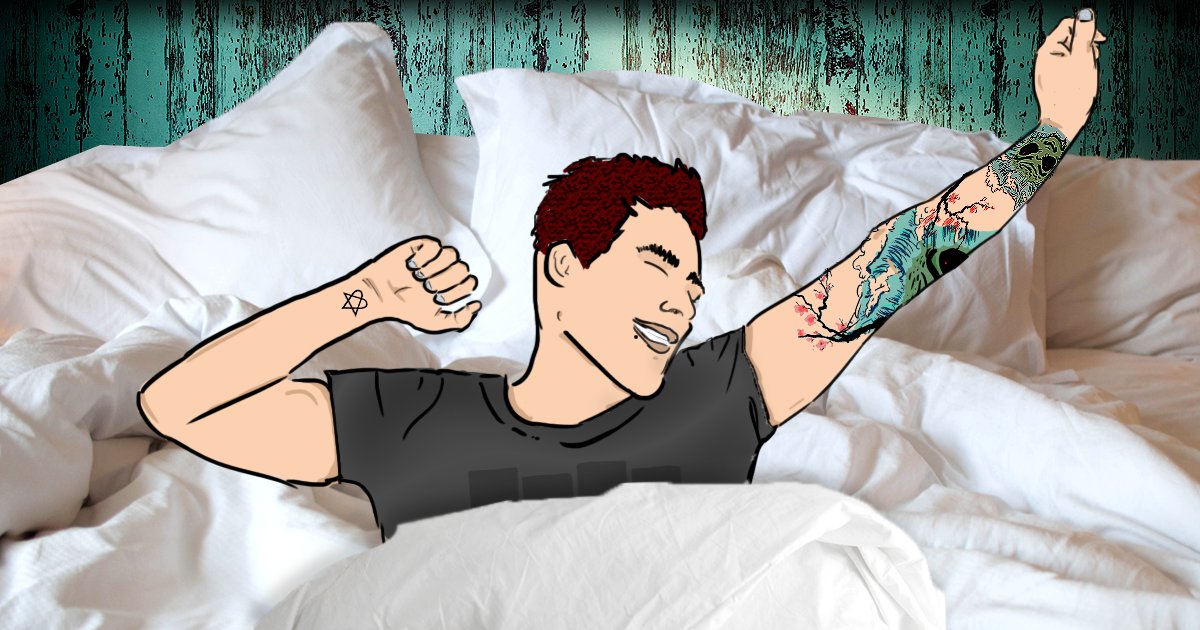 For today’s instalment of How I Do It, we get a peek into the sex life of Jake* a straight 27-year-old educator living in London.

Jake ended a long-term relationship recently after finding out that his now-ex had cheated on him multiple times.

He considers himself open-minded and ‘comfortable in all sexual situations’, and prides himself on not shying away from the experimental side of things. He especially loves sex when it’s with someone he feels strongly about.

However, the emotionally rough nature of the split left him with negative feelings towards sex for the first time in his life.

The pandemic didn’t exactly make getting back into the dating game any easier, but now that lockdown’s in the rearview, he’s started seeing someone new…

It’s my first day off in ages, but I don’t mean off work – as a teacher, I am currently free for the summer. I mean off as in from socialising.

It was my birthday a few days ago, and I made sure to plan tonnes of activities with lots of different friends; I have been out every night for days and I have even more planned for the rest of the week.

For tonight though, I just relaxed and focused on myself.

I have been texting a girl that I met just over a week ago at a gig. She wasn’t replying to me, so I thought she wasn’t interested, and then she sent me a picture of her trying a bikini on along with ‘thinking of you’.

We have set a date to hang out later this week.

I went for drinks in Paddington with some uni friends that I hadn’t seen since before the pandemic.

I’d been texting the gig-girl all day, and she asked me what time I would be finished with my friends.

I liked how forward she was, and I told her so. She asked me to come to hers after I was done.

I thoroughly enjoyed hanging out with my friends, but I also kept thinking about seeing her later. I was both excited and nervous.

Once my friends and I were done, I hopped on a train and made it to hers where she picked me up from the station.

After a drink (that I didn’t even finish) we ended up stripping off and cuddling in her bed. I don’t have the words to explain how incredible her body is.

We stayed up incredibly late laughing and creating our own in-jokes while her cat kept zooming in and out of the room. It was great to feel such a natural connection with someone again.

She had said that she didn’t want sex as it was only our first ‘date’, but that didn’t stop her from teasing me all night in other ways.

I could tell from the look in her devilish eyes that she really enjoyed seeing me try to resist.

I tried to tease her back and make things just as difficult for her, but she definitely won the battle. I’m determined to get her back.

I was woken up early in the morning by two of her cats fighting. It wasn’t the most relaxing start to the day, but I was incredibly happy when I turned to see a beautiful girl on my arm.

We exchanged ‘good mornings’ along with lots of kisses. She is the best kisser I have ever been with, and we kept pausing to make jokes or learn more about each other.

I had the pleasure of seeing her perfect body in the daylight – it looked even better than the previous night. I made sure to kiss every inch of it before we got up and started the day.

Before leaving, I got to meet her housemate and the rest of the cats and dogs in her home.

She also made me a fresh, nutritious breakfast before driving me back to the station while holding my hand.

Thoughtful, attentive and sexy… If we keep doing this, I’m going to end up catching feelings.

I went axe-throwing with some other friends from uni. It was great fun and I found that I was pretty good at it, but one person in our group thoroughly thrashed the rest of us.

I sent some pictures and videos to the gig-girl, and she told me how I looked like a sexy Viking – the greatest compliment I have ever received.

Even better, she sent me a hot picture in her half-buttoned work uniform. She knows how to capture my attention.

My friends and I ended up at a hipster pub, got drunk and caught up. I felt incredibly happy to be able to share that I had started seeing such an amazing girl and that I couldn’t stop thinking about her.

My friends were very supportive, especially since they knew that I had been through a harsh breakup earlier in the year.

I went to a festival with another group of friends. We’d all won tickets, and we didn’t know a lot of the acts, but we still had fun together.

I still texted the gig-girl very regularly throughout the day, and we shared how we were both really excited to see each other tomorrow.

I keep finding myself thinking how everything I do would be even more enjoyable if she was there too.

I feel like she already has power over me.

It’s my final day off from work. I organised to see the gig-girl in the evening, so I spent the day picking out clothes, trimming my hair (everywhere) and making myself smell nice.

I met her after she finished work in central London, and we went to the cinema. It was one of those Everyman theatres, so we got to cuddle up on one of the sofas together, share a few kisses and have a cocktail. It was great to see that there was still chemistry between us.

After finishing at the cinema and having some more cocktails, we headed back to her place. As it was incredibly late already, and we both had to get up early, we went straight up to the bedroom to get settled.

I was greeted harshly by her cat before it ran off, then we had the bedroom to ourselves.

We started kissing and undressing each other; I thought this was the perfect opportunity to get back at her for teasing me a few days ago. I told her how I didn’t want sex tonight while kissing her neck and caressing her body.

However, this seemed to rally her and I gave in to my own lust. She was just too hot to resist.

Another opportunity for revenge came later when she tried to get on top. I pushed her back down, holding her tightly, and told her how tonight, I was in control.

This turned out to be a fantastic move as we had incredible, intimate sex while she got off on the idea of being dominated.

We cuddled until we realised just how late it was, and how we would both need to be up for work in less than four hours. Time to sleep.

I was woken up by her faint alarm and her gentle movements.

I think I felt her kiss my back a few times and when I turned over, I saw her cat giving me a death glare. I swear that animal is going to off me in my sleep one day.

We got up after a few kisses and started getting ready for work.

I shouldn’t have stayed at hers on a work night as she lives almost two hours away from my job, but life is full of opportunities, and you only regret the ones you don’t seize.

We made our way out of her house to catch our train into the city. She held my hand and kissed me, whispering: ‘I wish we could have had morning sex’.

I must have done something amazing in a previous life because I do not deserve this girl.

After bumping into her friends on the train, grabbing a Greggs and riding the Metropolitan Line, I made it to work with only a few minutes to spare.

The morning was full of long meetings and I found myself in a constant cycle of two contradictory states: smirking while reminiscing about our night of hot sex, and very obviously trying to stop my eyes from closing.

How I Do It

In Metro.co.uk’s How I Do It you get a sneak peek into a week of a person’s sex and love life – from vanilla love-making to fetishes, threesomes and polyamorous relationships, they reveal it all.