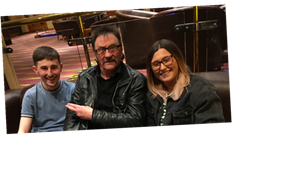 It's been revealed that Gogglebox stars Pete and Sophie Sandiford are related to The Chuckle Brothers.

Their uncle Paul Elliot, brother of the late Barry Elliot, has been telling us for years posting snaps of his niece and nephew on Twitter without any of us putting two and two together!

Now we know exactly where the Blackpool based sister and brother's knack for comedy comes from as the fan-favourites are known for their hilarious banter and witty one-liners on the Channel 4 show.

Get exclusive celebrity stories and fabulous photoshoots straight to your inbox with OK's daily newsletter . You can sign up at the top of the page.

Paul, 72, took to Twitter last March to share a throwback image from the year before of him grinning alongside Pete and Sophie.

He wrote: "This day 2018 with my great niece and nephew @PeteandSophie #Gogglebox"

With one person responding to the tweet writing: "THAT'S why they're so funny!"

Paul posted another family snap with his wife Sue, as well as Pete and Sophie, and their half sibling Lucy as they enjoyed a day out together.

One of Paul's followers replied: "Can so see Barry in Pete. Now I know where he gets his comic side from. May Barry's legend live on in Pete."

And when Barry sadly passed away after a battle with bone cancer in August the same year, Sophie took to Twitter to share a sweet tribute to her uncle.

The TV star, who joined Gogglebox alongside her brother Pete in 2018, wrote: "A truly lovely and funny man to be around. You filled millions of childhoods with laughter and entertainment including mine and Peters.

"You will be sadly missed by many. Rest in peace Uncle Barry. Lots of love from me, to you."

Even though they're on television and have a famous uncle Pete and Sophie both still work their day jobs.

Sophie is a window dresser, while Pete works in the insurance industry, and it's believed that each family that appears on Gogglebox are paid £1,500 a month to share between them as they choose.

Fellow stars of the C4 show sisters Izzi and Ellie Warner recently revealed that the show will be coming back to our TV screens at the end of the week.