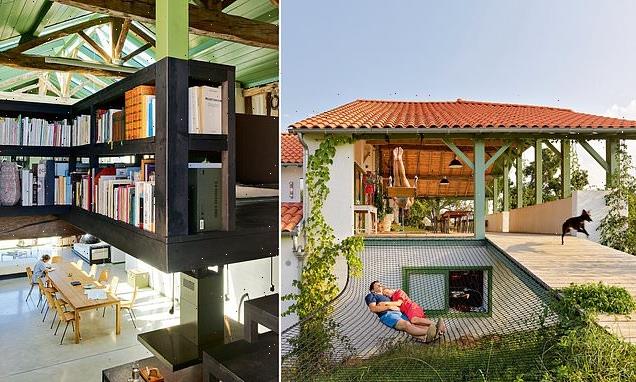 It’s open house: How do you turn a crumbling French ruin into the ultimate family home? First, make features of the bits that are missing – then use nets instead of floors and ceilings, as Jessica Salter discovers

I can’t change a thing,’ was Anna Chavepayre’s first thought when she opened the door to her dilapidated 300-year-old farmhouse and saw light flooding in through the collapsed roof. ‘It felt like finding an enchanted world – and I wanted to keep its sense of magic.’

Chavepayre, a Franco-Swedish architect, and her husband Julien found the farmhouse, in France’s Basque region, in 2012 after years of searching.

It was to be a family home for them and their two daughters, Lou, now 22, and Valentine, 17. Despite the state of the property, the whole family was ‘spellbound’, she says: ‘Valentine, who was very young at the time, said to me, ‘I’ll just sweep up and we can move in.’

Although the farmhouse needed rather more than a quick push-around with a broom – a year spent on design and planning regulations, followed by the build – Valentine’s words chimed with her mother’s vision: even in its dilapidated condition, to Chavepayre the property was perfect. 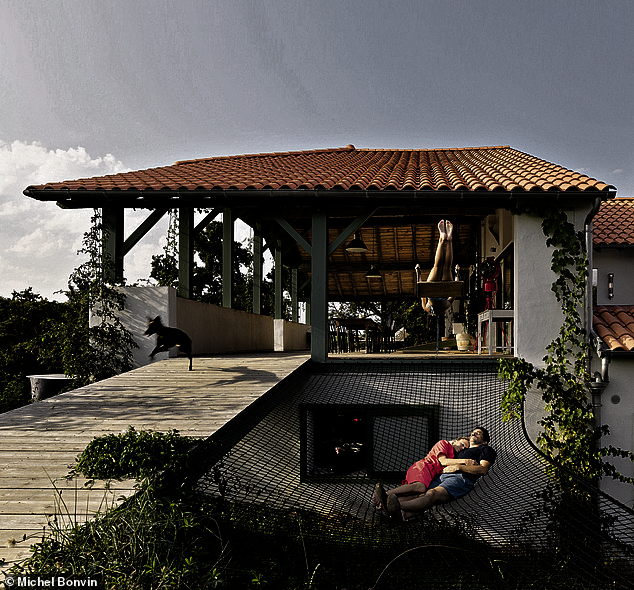 Ramp up the fun factor: Anna Chavepayre and husband Julien enjoying one of the two nets she installed which give the farmhouse such personality. ‘You can lie down on it, read, sleep – and it doesn’t obstruct the view.’ Daughter Valentine makes the most of another playful addition – a swing. Swann the dog makes his own entertainment 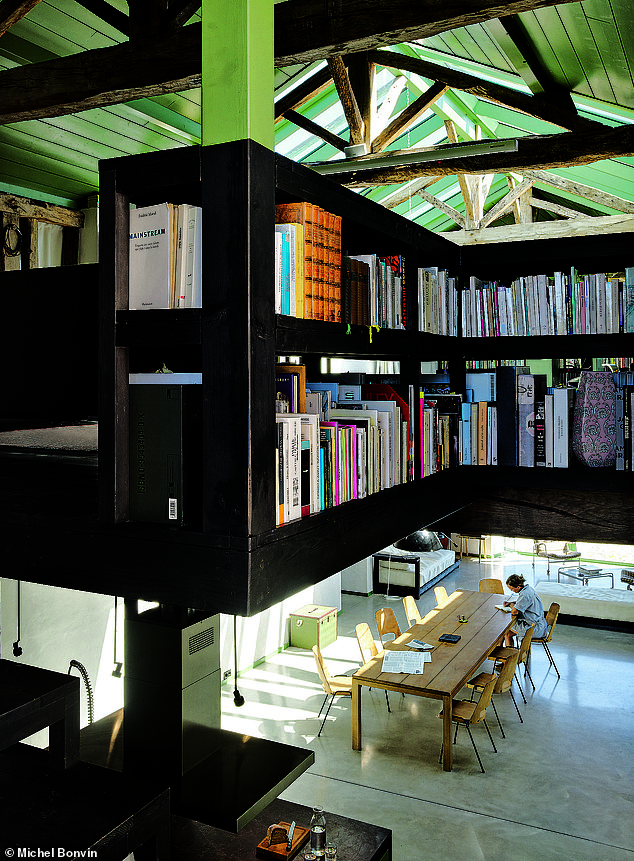 Double duty: Everything in the house is multifunctional. The library serves as a stair railing while also creating a private reading space 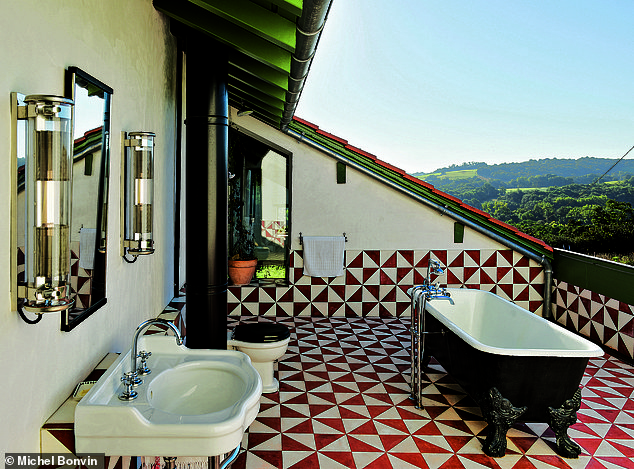 Groom with a view: ‘Gazing out over the mountains as you have a bath or a shower is magical,’ says Chavepayre. ‘It really connects you with nature.’ For similar tiles try claybrookstudio.co.uk

She explains: ‘You would never put a hole in a roof, but since it was there I wanted to keep it. The light was incredible; it gave the feeling of being outside while inside. You could even see birds flying above.’

So Chavepayre kept the opening and added a glass roof above. And instead of safety railings, she installed a giant net stretching across a wide-open area on the first floor. Of this unusual addition she says, ‘A net is not only affordable, but you can lie, sleep and play on it. It’s so versatile.’ In fact, so struck was she with the idea of a net that she had one installed outside, too.

With the renovation mainly led by budget – they had €300,000 to spend – moving any of the farmhouse’s original thick walls was too costly, so Chavepayre had to work with the existing floor plan. This, she says, has ‘allowed the house to invent our lives for us’. By this she means that rooms have become multipurpose: bathrooms double up as libraries, staircases provide places to sit as well as shelving options. ‘Create uncertainty and see where it takes you,’ she says of her home’s unique flow. 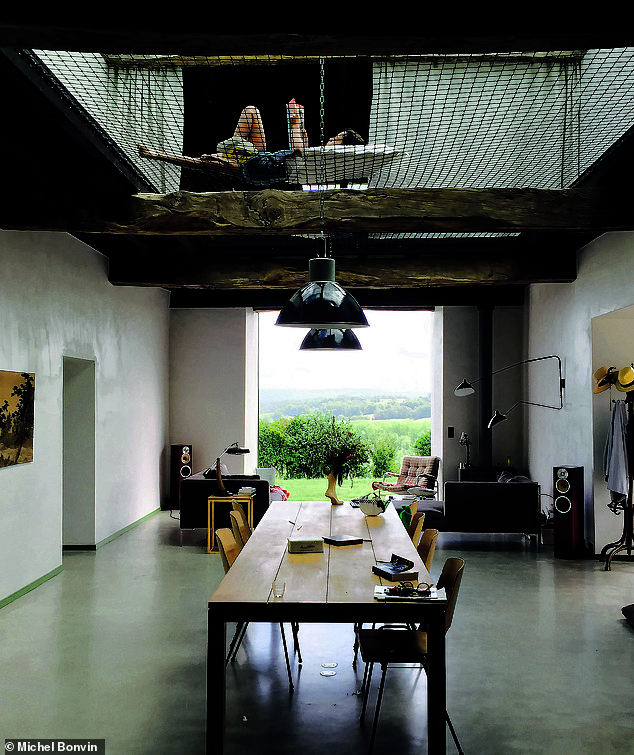 Want to hang out? In the dining area a small original window was opened up to capitalise on the vista of the Pyrenees, while the indoor net above has caught Valentine’s attention as a spot for relaxing. For a similar dining table try oka.com 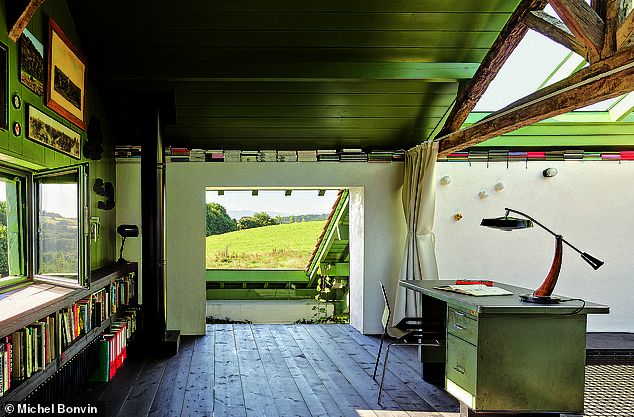 Outside edge: A desk overlooks the indoor net, with the glass roof above, and views out over the countryside. ‘Wherever you are in the house you have the feeling of being completely outside and inside at the same time,’ says Chavepayre. For a similar desk try the Bisley at johnlewis.com

Due to the strict budget the couple decided to take advantage of areas of the house that many would have removed or restored. For example, the ground floor has been refitted with an open-plan living and dining space, while a bathroom, bedroom and storage area is reserved behind the existing walls.

The renovation was recently featured on Apple TV’s Home show and in it daughter Lou, who has cerebral palsy and is studying for an MA in art, says her mother’s ‘craziness’ inspires her. I ask Chavepayre if indeed this project did feel crazy at times. ‘Everything is crazy until it isn’t any more,’ she says. ‘It’s like when Lou was little and the doctors said she would never read or write – now she lives away from home and is an artist. This house was a ruin and was being reclaimed by nature, and I wanted to keep that. With everything in life, you have to be free and not fear the unknown.’

For more details on the renovation visit collectifencore.com