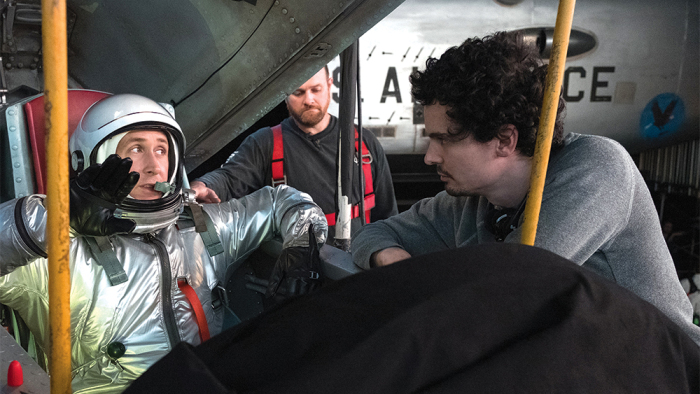 After winning the director Oscar for “La La Land” in 2017, Damien Chazelle did a thematic 180-degree turn for his follow-up. “First Man” centers on Neil Armstrong (played by Ryan Gosling), the first person to walk on the moon, and the personal story that took him to that momentous event in 1969. Chazelle credits his below-the-line team for bringing impressive realism to the story.

“Early on, Ai-Ling and members of her team gathered sounds, like working with SpaceX to get microphones close to launch pads to get thruster sounds. One crew member went to NASA facilities to put mics inside the old spacesuits to capture authentic sounds like the creases of gloves and buckles — plus sounds from real capsules, such as switches and door handles. After they layered in all those with the sound Mary Ellis [the sound mixer] recorded on the set, we decided where to augment, when to tone down. For some moments, Ai-Ling used nonliteral sounds to convey the terror and intensity in some of those missions. For example, during that Agena spin [a wild rotation sequence] there are sounds from an elephant stampede, a lion roaring, wolves growling, to give it a heightened dimension.”

“We wanted to shoot in a cinéma-vérité style, and we knew any effects sequences would need to fit into that. It would destroy the illusion if the audience felt the use of greenscreen. For space sequences, we went to LED projection [instead] and used camera mounts on craft, rather than a God’s-eye view, with lots of wide-angle POV in cockpits. Another challenge for Linus was the mixing of formats: 16mm for early scenes and inside-the-capsule stuff, then 35mm for some NASA moments to communicate the overwhelming sense of scale; all of it was processed to get a unified, slightly grainy, analog look. And then for the lunar surface, we shifted to Imax. So you go from one of the smallest film gauges to the largest, to give the audience a moment of sudden clarity that stepping onto the moon might have provided.”

“Most of the film was post-scored, but the process started earlier. Some space sequences — like separating from the command module and descending to the lunar surface — were basically composed before the imagery, based on my descriptions to him. When we edited, Tom and I were in one room and Justin was next door. As soon as we had a rough cut of a scene, we would hand it to Justin, who would rough score it. Or he would give me a little library of melody or cue ideas; then I would mix and match with scenes Tom and I were cutting. Justin’s music became an editing guide. The methodology was like the musical numbers in ‘La La Land’ or the final concert in ‘Whiplash,’ letting the music guide us. We never had to do a cut of the movie with a temp score.”

“We wanted to be really exact in accuracy, and Nathan’s team had a fanatical attention to detail. For example, the multi-axis trainer was a machine that doesn’t exist anymore, so we had to rely on archival footage to figure it out. There are no digital effects in that scene: Ryan got in and it spun and rotated, exactly like you see in the film. Nathan built it from scratch, getting the scale and design — and making sure it worked and was safe. All of that was tricky. That was just one example. Mission Control was built based on blueprints and photos. The Armstrong house and cabin in Houston: Nathan built both from scratch as exact replicas. The lunar surface was all done practically, in a rock quarry that was sculpted to look like the moon. We were all gobsmacked by what Nathan and his team achieved in such a short time.”

“There was such a volume of footage — we shot almost 2 million feet of film. While we’re shooting, Tom tends to stay away from the set. He and I believe it helps preserve an objectivity, an untainted view if he’s not privy to how certain scenes were shot. He’s my more objective eyes and ears. I don’t visit the cutting room during shooting, but we talk all the time, about ‘How is this scene feeling to you?’ It’s helpful because he has only seen footage as a viewer would, which is not colored by what happened that day on the set.”

“There were almost two movies for Mary to balance: One was the documentary-style scenes on the ground, trying to be authentic about what that community in Houston felt like. And the other was this movie of space suits. Those costumes were built. There was a lot of trial and error, tailoring the suits to the actors and making sure it was all functional, with cooling tubes to keep them from overheating. It would be hard enough if Mary only had to get one suit right, but the spacesuits evolved with each mission, and each suit had its own set of challenges, from training suits to the moon-walk suit; all got more complex and harder to replicate.”