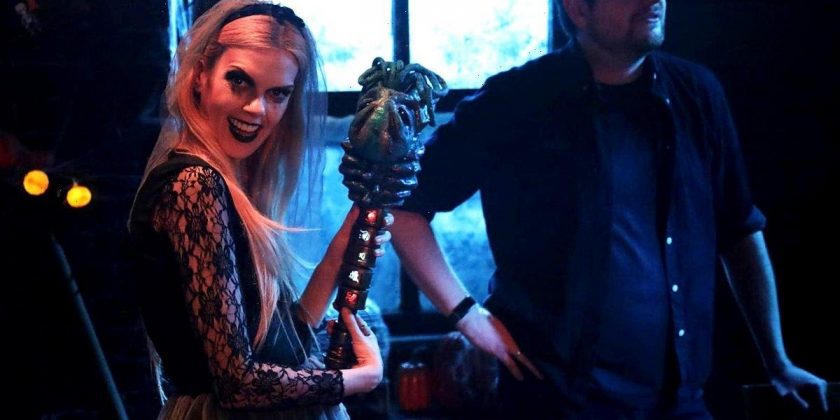 Most of us are scared of things that go bump in the night but one British actress actively seeks them out.

Ayvianna Snow, 25, has always been fascinated with the dark side, as a teen she was obsessed with Ouija boards and graveyards.

Now she continues to encourage the supernatural into her life by starring almost exclusively in horror films.

She prepares for her spooky roles with meditations in the darkness, tarot card consultations and watching back-to-back horror films.

On film sets, she's seen Ouija boards catch fire for no reason and ghostly apparitions that were so real she thought they were other actors.

She exclusively told Daily Star: “I was a quiet and introverted child and began my interest in the supernatural in my teens – I was just drawn to it, not just with films but by sneaking out and visiting graveyards in the middle of the night.

“It seemed exciting, and some graveyards can be very beautiful. The stillness and the silence there appealed to me.

“I discovered tarot cards and started consulting them to help with all my major decision-making.”

Ayvianna's interest in the supernatural is why she made the decision to star exclusively in horror films.

She loves the fact that horror is such a versatile genre – there really are no limits.

The best films in this genre are about something more than just jump scares and slasher scenes, they use horror to explore something deeper.

She added: “I enjoy working in a genre of film that can be unsettling and make us question society's norms. And of course, people love horror films because being scared can be thrilling!”

While shooting these films Ayvianna often has run-ins with the supernatural.

When she was on set of the movie The Tombs she kept seeing a man dressed in period clothing hanging around the set, whom she assumed was just one of the actors.

"Later on, when I asked about him, no one had ever heard of him, and it transpired he wasn't one of the actors employed that day,” she shared.

“I later found out the London Bridge Experience is built on the site of the old London Bridge where people used to live for hundreds of years!

"When filming The Seven in 2018 we did a scene using an ouija board to contact the dead- one of the other actresses didn't like having the board in the dressing room so she left it outside. Later that day, we looked out the window and the board was on fire!”

Ayvianna takes her work seriously and dedicates her time and energy to preparing for each role.

She watches back-to-back films to immerse herself in the genre and listens to podcasts about the supernatural – the spookier the better!

The 25-year-old also meditates silently in the darkness.

“When I get some downtime between films, I do eventually plan to go ghost hunting. I am always keen to encourage my own supernatural experiences,” Ayvianna shared.

“I find it interesting that belief in the supernatural is as popular as ever. I recently read that four out of 10 Americans believe that ghosts and demons exist.

“No wonder the public's love for horror films continues to go from strength to strength – I'm glad to be part of that.

" In my career, I'm challenging the supernatural to prove itself to me."

Ayvianna is starring in the film Video Shop Tales of Terror which comes out January 2023.