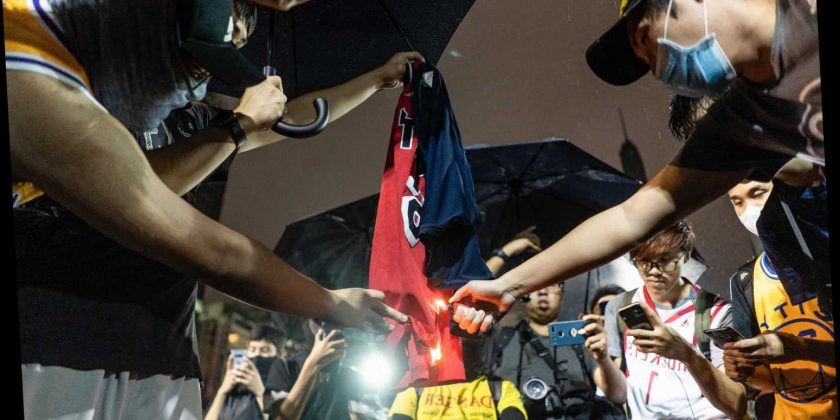 LeBron James is facing one of the most contentious moments in his career after making controversial comments about the NBA’s response to the protests in Hong Kong.

“I don’t want to get in a word sentence feud with Daryl Morey, but I believe he wasn’t educated on the situation at hand, and he spoke,” he added. “And so many people could have been harmed, not only financially, but physically, emotionally, spiritually.”

The protestors in Hong Kong have been demonstrating for weeks in opposition to a bill allowing criminal suspects in the region to be extradited to China under certain situations, according to the BBC.

But Morey was swiftly rebuked by the Rockets, the NBA, and by Chinese organizations that announced they would no longer broadcast Rockets games in the country. James and the Lakers were in Shanghai for a preseason game at the time when the Rockets executive made his comments, and faced backlash from Chinese officials.

Morey tweeted his apologies two days later, saying, in part, “I did not intend my tweet to cause any offense to Rockets fans and friends of mine in China… I was merely voicing one thought, based on one interpretation, of one complicated event.”

James’ response to Morey and his comments about Hong Kong have received much criticism in the U.S. and abroad.

The NBA has worked for years to establish a presence in China, getting its biggest boost in the early 2000s when the Rockets drafted center Yao Ming, a native of the country.

Since then, stars like Kobe Bryant and Klay Thompson have made trips to China in the offseason to help the NBA develop in the region. James, who has a lifetime contract with sports apparel company Nike, also has much to gain, or lose, with the NBA’s popularity in the East Asian country.

According to ESPN, the protestors voiced their support for Morey while shouting anti-James chants.

“People are angry,” a web designer in Hong Kong told the outlet.

James defended his comments in a series of tweets on Monday.

“Let me clear up the confusion. I do not believe there was any consideration for the consequences and ramifications of the tweet. I’m not discussing the substance. Others can talk about that,” he wrote. “My team and this league just went through a difficult week. I think people need to understand what a tweet or statement can do to others. And I believe nobody stopped and considered what would happen. Could have waited a week to send it.”

“The people of HK fighting for human rights & autonomy had a tough week,” Scott wrote on Tuesday. “You’re right, @KingJames. People need to understand what a tweet or statement can do to others.”