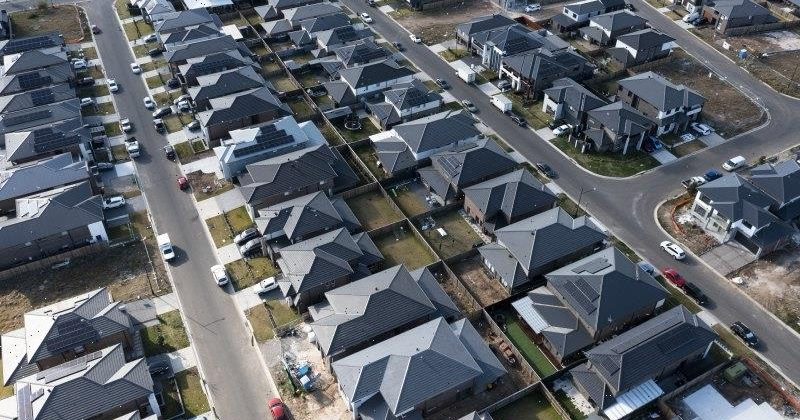 Homebuyers will need to earn more than $200,000 a year to buy a mid-range house in more than 270 Sydney suburbs if tougher borrowing limits are introduced.

An analysis of what would happen if a cap limiting a mortgage to six times a borrower’s income came into force in Australia’s booming housing market shows individuals with a 20 per cent deposit would need an annual income above $100,000 to buy in hundreds of suburbs in both cities. 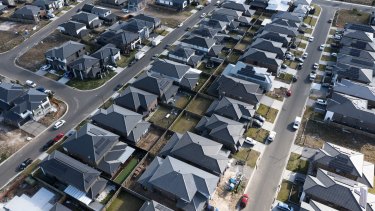 Property prices have surged during the pandemic, attracting the interest of regulators.Credit:Rhett Wyman

More than 500 suburbs in Sydney would require a $100,000-a-year income to service an average mortgage, and in Melbourne the same applies to more than 300 suburbs.

An analysis of CoreLogic property price data by The Sydney Morning Herald and The Age shows a household with a 20 per cent deposit would need an annual income above $200,505 to buy a median-priced house in Rouse Hill, in Sydney’s north-west, costing $1,502,787. In Warrandyte, north-east of Melbourne, a median-priced house at $1,519,301 could require borrowers to have an income above $202,574.

“Our proportion of family income devoted to meeting average loan repayments have increased, with NSW showing the biggest spike,” she said. “This suggests that more and more Australians are committing themselves to higher debt.

“Some would argue that with a hot market [ratio limits] might mean some people are disadvantaged and cannot get the property that they want,” she said, but it also meant home buyers might consider a home more within their budget, which could help cool the market overall.

Even at the bottom end of the market, buyers with a 20 per cent deposit could need to be taking home at least $83,000 to buy a median-priced house in the cheapest western Sydney suburb of Tregear and $59,000 in Melbourne’s Melton.

Despite recent moves by the Australian Prudential Regulation Authority (APRA) to ease risks in the nation’s booming housing market, large banks and economists warn extra restrictions could be on the cards.

In early October, APRA raised the rate banks are required to use to assess borrowers’ ability to repay their loans to 3 per cent above the interest rate charged, from 2.5 per cent. The change to serviceability rules, which will come into force next month, is expected to affect a typical borrower’s lending capacity by 5 per cent.

APRA chairman Wayne Byres has also raised concerns that more than one in five new loans approved in the June quarter were worth more than six times borrowers’ incomes, leading economists to predict this is the debt-to-income limit it would adopt if it needed to take further action.

National Australia Bank expects Sydney property prices to increase 27.5 per cent this year and 5.4 per cent next year, with Melbourne to rise 18.8 per cent and 4.9 per cent.

“Importantly for the housing sector, policymakers are alert to a build-up of macroprudential risks amidst very low interest rates and the sharp rise in house prices … we remain alert to the possibility of further measures around the turn of the year, likely in the form of high DTI [debt-to-income] or LVR [loan-to-value ratio] speed limits,” the bank’s outlook said.

CoreLogic’s head of Australian research, Eliza Owens, said the research house was watching closely for a debt-to-income limit to be introduced, although she expected regulators to take a cautious approach.

“But I think that if the risk that we’ve seen in lending data in recent months continues, then we would probably see further interventions,” Ms Owens said. “Given that housing has been such a core component of the recovery from COVID, both in the real estate activity itself and the wealth effects, there may be more caution.”

One of the factors determining whether regulators will introduce extra restrictions is how much risk is in the market and the rate of property price growth.

The CoreLogic daily index shows property values increased more than 1 per cent in the first 21 days of October in Sydney and by 0.6 per cent in Melbourne. This is slower than at the peak of the coronavirus pandemic property boom but still relatively strong.

Potential buyers hoping to borrow the maximum amount are now rushing to get in before the new APRA serviceability rules start, although some will be disappointed as several banks have adopted them early. Others are still allowing new buyers, or those renewing pre-approvals, to borrow the maximum under the old rules before November 1.

“It’s very much on the top of sellers’ minds to try to get a deal together before the market could be impacted,” The Agency Epping’s Catherine Murphy said. “If you know buyers, instead of being able to spend $2.5 million, they can only afford to be spending $2.1 million, that counts that buyer out of the game. The more buyers you have, the more you end up selling for.”

Adrian William principal Adrian Tsavalas has seen some sellers keen to list before the new rules kick in.

“It could possibly ease [price] growth but I don’t think it’s going to cause the market to retract.”

Borrowers have 90 days to use their pre-approval before it expires, meaning buyers may be able to access their maximum budgets until the end of January.

“Everything seems to be premium price and premium demand,” he said. “Agents foresee that happening right through until early next year when these changes kick in.”

Shore Financial chief executive Theo Chambers said pre-approved clients were asking how the change affected them and worrying they might need to buy sooner than later.

“It’s almost a bit too late for those people because some of the banks will apply the change regardless of if you’re already approved,” he said.

Banks were also making their own changes such as being more cautious about how much debt borrowers could take on relative to incomes to reassure the regulator, he said.

“For the majority of people, it doesn’t make much difference and it won’t hit all parts of the market. It’s a pretty light touch overall and will make a minimal impact,” she said. “I do think that deadline will see prices calm a bit though. If only because the APRA changes are signalling that they are watching, they are not going to let it get out of control, and there will be a limit.”

Melbourne buyers’ advocate Wendy Chamberlain is yet to see any impact on her clients but expects buyers will soon not be able to borrow as much and will look at homes at a lower price point.

“I don’t know if it’s going to take the wind out of the market,” she said. “If you can’t afford to buy that house you’ll just drop into a lower price bracket.”

Fascinating answers to perplexing questions delivered to your inbox every week. Sign up to get our new Explainer newsletter here.