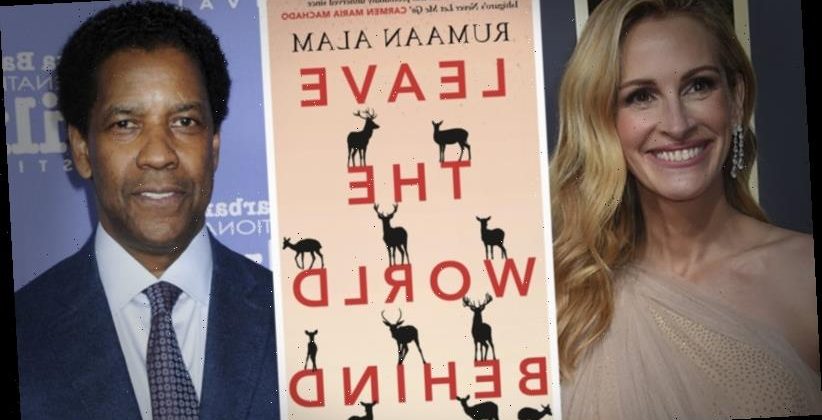 Author Rumaan Alam kept his expectations low, even as the film rights to his upcoming book Leave the World Behind became the centre of a bidding contest among Hollywood studios earlier this year.

During two brisk weeks in July, the Brooklyn-based novelist kept interrupting his family holiday on Fire Island to field phone calls from agents, producers and executives. Sam Esmail, creator of USA Network's Mr. Robot, was on board to direct a feature based on the socially conscious thriller. Julia Roberts and Denzel Washington had agreed to star and produce. Studios including Netflix, Apple and MGM were making offers. 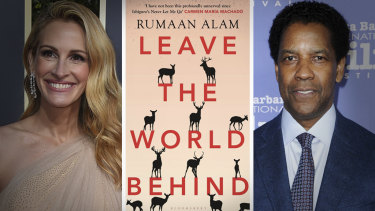 Julia Roberts and Denzel Washington are tied to the adaptation of Rumaan Alam’s novel Leave the World Behind.

Alam remained sceptical until that Monday when, while on the beach with his husband and two sons, he got the call from Michelle Weiner, head of Creative Artists Agency's books department, who was handling the auction, saying they'd scored a deal with Netflix.

"I was waiting for the day when Michelle's assistant would have to send me, like, a consolation bottle of Champagne," Alam said. "I was sitting there in the sand kind of dumbfounded."

The lickety-split deal-making for Alam's novel is just one example of a larger trend that has played out in the entertainment business during the COVID-19 pandemic: a surge in deals for studios to adapt books for film and TV.

With film and TV productions stalled, studios have gobbled up the rights to hundreds of novels and non-fiction tomes that they hope will underpin future hits.

We've had more examples of having something pitched on a Monday and sold by a Friday than ever before.

Like housebound folks across the world, studio executives, filmmakers and actors have had far more time to read books. That newfound availability, coupled with streaming services' and media companies' insatiable appetite for fresh material, has led to a substantial uptick in sales, according to agents and producers.

CAA, for instance, has packaged and sold about 175 book titles for film and TV so far this year – about five times the agency's volume during the same period of time in 2019, the company said. Rival agencies, including WME and United Talent agency, also reported significant bumps.

"We have had an extraordinary increase in volume over the last five to six months," Weiner said. "There are directors and actors and creators and producers that suddenly and without notice found themselves available."

Shortly after CAA began working remotely, MGM bought the rights to The Martian author Andy Weir's upcoming novel Project Hail Mary with Ryan Gosling set to star. The agency also sold Brit Bennett's bestseller The Vanishing Half to HBO, after a bidding war. In August, Netflix acquired the feature film rights to Femi Fadugba's debut novel The Upper World, a deal that was completed within a week of pitching studios, according to Weiner. 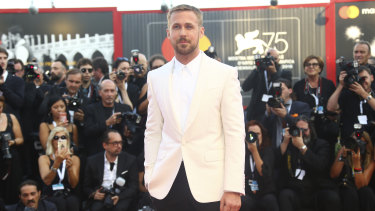 "We've had more examples of having something pitched on a Monday and sold by a Friday than ever before," Weiner said. "It reflects both the bandwidth and the parallel appetite of buyers to keep their development slates robust."

Esmail was in the middle of shooting Angelyne, a TV miniseries about the mysterious Los Angeles billboard icon, when the threat of coronavirus shut down film sets in March. With Mr. Robot having concluded in December, he was looking for new projects. Later in the US spring, a copy of Leave the World Behind crossed his desk. He quickly devoured it, thrilled by the story of a white couple whose trip is disrupted when their holiday rental home's black owners unexpectedly return.

Seeing the cinematic potential, he texted Roberts, whom he'd befriended while directing the 2018 debut season of Homecoming for Amazon. Roberts read the novel within days, agreed to participate, and later sent the book to Washington, her co-star from 1993's The Pelican Brief.

For Esmail, who typically avoids adaptations, the speed at which a team coalesced around the project reflected timeliness and quality of the source material.

"This doesn't happen without the book being really fantastic," he said. "I was so excited by the end, and I think it was the same for Julia. It's got a lot of layers, and it's talking about a lot of themes in a deep way, but it doesn't feel didactic. It doesn't sacrifice any entertainment value for all of that."

The boom in books represents a bright spot for talent agencies that have seen other parts of their businesses ravaged by the ongoing coronavirus crisis. Brutal disruptions for films, live events and concerts cut off revenue streams for agencies, leading storied institutions including CAA, WME, UTA and ICM Partners to lay off employees and slash pay.

The two biggest talent giants – WME and CAA – are still trying to resolve their more than-a-year-long standoff with the Writers Guild of America over longstanding agency practices such as collecting packaging fees and investing in affiliated production companies. Working with book authors is one way agencies have been able to continue packaging projects during the feud.

The bright side for agencies is that studios and streaming services are still salivating for intellectual property, and books are ideal targets.

Sales of book rights have climbed steadily during the last three to five years, thanks to the rise of prestigious drama series that have come to dominate streamers and cable networks, taking the mantle from old-school procedurals, according to Weiner.

Big Little Lies garnered awards attention and eyeballs for HBO. The network's adaptation of I Know This Much is True, the novel by Wally Lamb, earned a lead actor Emmy for Mark Ruffalo last month. The Handmaid's Tale, based on the Margaret Atwood book, helped put Hulu's original content business on the map. The Disney-owned streaming service also released a series adaptation of Celeste Ng's Little Fires Everywhere this year. 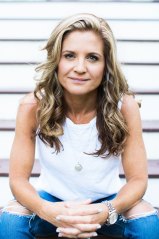 Author Glennon Doyle will co-write the first episode of the TV adaptation of her memoir, Untamed.

"Thank God these authors have found the market that really values them," said Feig, who focuses on young adult material, and produced the recent HBO Max book-to-film adaptation Unpregnant. "What I actually love is the authors are having more agency in the deals as well."

Years ago, Hollywood tended to hold book authors at arm's length, often giving them little say over how the film and TV versions of their art turned out.

But the surge in demand has given authors new leverage in the entertainment business. It has become the norm for novelists and non-fiction writers to secure producer roles on shows based on their work. It's also increasingly common for authors to adapt their own work for the screen, something that used to be a rarity in the business.

Jill Gillett and Sylvie Rabineau, who co-head WME's literary packaging department, said all of the deals they've done in the last six months have given the authors some involvement in the projects, either as producers or writers. That wasn't always the case before the pandemic.

Producers often want authors involved because they can bring additional layers of insight to the characters. A 300-page book is often whittled down from 500-plus pages of material, a potential goldmine for ideas.

"There was always this knee-jerk reaction that authors are very precious about their material and they couldn't be trusted to adapt their own work or be involved in the process, and I think we've proven everybody wrong," Rabineau said. "That pendulum has really swung, where most studios and producers absolutely value the services an author can provide even beyond the underlying material."

Studios are also more willing than ever to boost the authors' careers by including "based on the novel by" language in advertisements for shows and movies. Networks, studios and streamers also use tie-ins to hype the books and movies, such as releasing the book ahead of a show's premiere with cover art from the production. Those kinds of marketing commitments have become more routine for sellers to demand during negotiations.

The growing power of TV series over movies has also changed the dynamic for authors. Now, the majority of the big deals are coming from the TV side of the business, thanks to the explosion of cable and streaming series known as Peak TV.

One benefit of television is that it gives creators more freedom to adapt novels that don't necessarily fit the structure of a two-hour, three-act movie, said Bruna Papandrea, the Australian founder of production company Made Up Stories.

"For TV, it's so much about world-creation and voice," said Papandrea, who specialises in book adaptations and is executive producing projects including a miniseries based on Nine Perfect Strangers by Big Little Lies author Liane Moriarty. "Something TV can do brilliantly, much more so than film, is evoke specificity of voice."

At the beginning of the COVID-19 shutdown, buyers were most interested in bidding on feel-good stories, said Mary Pender, an agent in UTA's media rights division, which represents book authors, magazine writers, life rights, podcasts and other underlying material.

One of the agency's early sales during the pandemic was Indonesia-based author Jesse Q. Sutanto's book Dial A for Aunties, which Netflix is turning into a romantic comedy with Fresh Off the Boat creator Nahnatchka Khan. 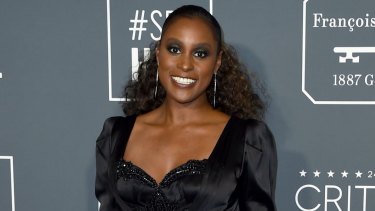 Issa Rae will be one of the producers of a feature film based on Tanya Smith’s upcoming memoir, The Ghost in the Machine.Credit:Jordan Strauss/AP

But as the production pause dragged on, the deals expanded beyond lighthearted fare to a wider variety of genres, including thrillers and heavier literary fiction.

"That was probably until May-ish, when we realised [the pandemic] was going to continue, and the floodgates just kind of opened on everything again," Pender said. In August, UTA announced an agreement for Issa Rae and David Heyman to make Ghost in the Machine, Tanya Smith's upcoming white collar crime memoir, for Netflix.

Because of the months-long production delay, it's unclear when any of the projects acquired during the industry's book-buying spree will actually be produced, let alone premiered.

Studios are flush with unfinished projects they need to complete. They are cautiously returning to film and TV sets, prioritising projects that were mid-shooting when COVID-19 hit, as well as more pandemic-friendly productions, including reality TV and documentaries. For months, they'll be dealing with a massive backlog of productions desperate to get off the ground.

Agents expect the flow of deals to ebb somewhat as production resumes.

"It's really been a gold rush," said Kassie Evashevski, a producer and manager at Anonymous Content who joined the company from UTA in 2017 to establish its literary rights division. "I imagine it may slow down a little, because it's been a really frantic pace."

Alam, for his part, has observed the uptick in book deals, understandably noticing the tweets and trade publication headlines announcing when his fellow authors sell their work to HBO and other buyers. He sees Hollywood's increasing interest in novels as a sign of the art form's continued power and relevance in culture.

"It makes sense that people are turning to books for storytelling," he said. "There's a lot of exciting contemporary writing. I think it shows that the literature is very healthy."