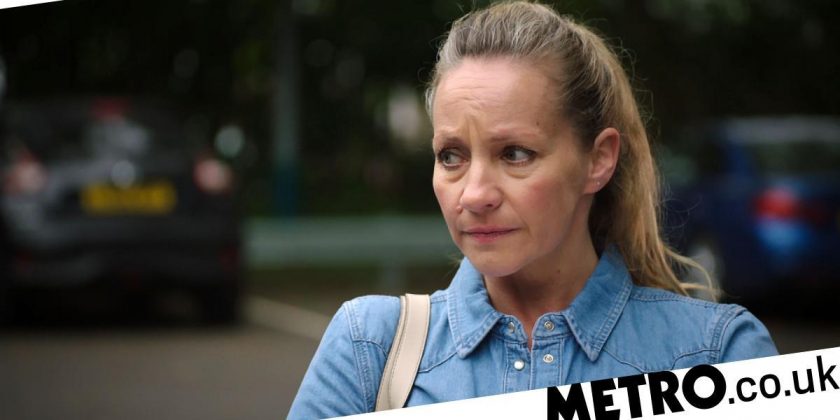 Essie (Kaye Wragg) has always wanted to be a mum, and in tonight’s Holby City she might have finally got her wish as she was left holding a small baby called Isla. The baby belonged to a woman called Frankie (Sophie Harkness) who was a mystery for a lot of the episode, but eventually revealed herself to be a relative of Raf’s. As Raf’s widow, Essie was part of the family as far as Frankie was concerned and of course she’s a very warm and trustworthy person. Faced with a desperate situation and terrified that her baby would be taken into care, Frankie asked Essie to look after Isla for a week, before vanishing to ‘sort herself out.’

Dominic (David Ames) advised Essie against getting too involved, but there was never a chance she would say no. ‘What if I am the only person who can do this for her?’ she argued and it was a genuine worry – Frankie was clearly very vulnerable and at the end of her tether. I certainly don’t expect Frankie to turn up next week to collect Isla and that being the end of it, though. It’s bound to get more complicated.

Talking of complicated, what’s going on with Ric (Hugh Quarshie)? One minute he was giving Zav (Marcus Griffiths) the shoulder squeeze which is ‘like the Paul Hollywood handshake times a million,’ according to Donna (Jaye Jacobs) and the next minute he was yelling the place down because he spilled some coffee. Spilled coffee wasn’t the worst of it, either. Ric has been making quite a few mistakes over the past weeks and Zav caught him about to do something in theatre that could have ended up with a perforated bowel for the patient – which is obviously not ideal. Ric threw Zav out of theatre for intervening in that incident, and when Zav tried to speak to him about it later Ric became furious.

Donna is caught in the middle of this. Zav’s her partner but Ric is one of her oldest friends at Holby and practically a father figure to her. When Zav expressed concern about Ric, Donna insisted that she knows Ric and he’s ok. But he definitely isn’t. What’s it going to take before Ric acknowledges that things aren’t right – and what’s wrong with him, anyway?

Nicky (Belinda Owusu) mostly had a good week this week. Kian (Ramin Karimloo), who is rapidly becoming an absolutely classic Holby character, spotted that she tends to defer to more experienced colleagues rather than relying on her own skills and instincts. She needed to break bad news to a patient and wasn’t confident about doing it. ‘Be true, be brave, be kind,’ was Kian’s advice, but he realised she needed a Learning Experience. He gave her a patient who spoke no English, with no translator available, and Nicky had to find a way to communicate with him and treat his problems. She came through this with flying colours and Nicky learned, ‘That I can do intuitive and emotional, and also analytical and scientific.’

So far so good, but when she got home she didn’t quite shut the door properly and whose foot should appear in the gap but Evan (Jack Ryder)’s. It was a genuine jump scare. He claimed to be bringing Chloe’s stuff back and also wanted to pick up some headphones from Chloe’s room. Nicky didn’t want him to go in there, so to get rid of him quickly she went to look for them herself. ‘Such a paranoid little household,’ a very sinister Evan muttered. Even more sinister, we discovered that the reason he’d gone to the flat was to plant a camera there while Nicky was distracted. He now has eyes and ears on whatever Chloe does at home.

That wasn’t the full extent of Evan’s meddling this week, either. When he came back to the hospital to ‘clear his locker,’ Fletch (Alex Walkinshaw) volunteered to do it for him rather than let him back into the hospital. Evan made sure Ange (Dawn Steele) saw him shaking Fletch’s hand afterwards, so Ange assumed that Fletch was being friendly with Evan and got really angry with him. Fletch had already confided in Kian that his and Ange’s relationship wasn’t going as well as he’d hoped, and after this argument Ange dumped him. Has Flange fallen at the first hurdle?

Sue Haasler is the author of the official Holby City book, which you can read about here. Her latest novel, Half A World Away, is out now