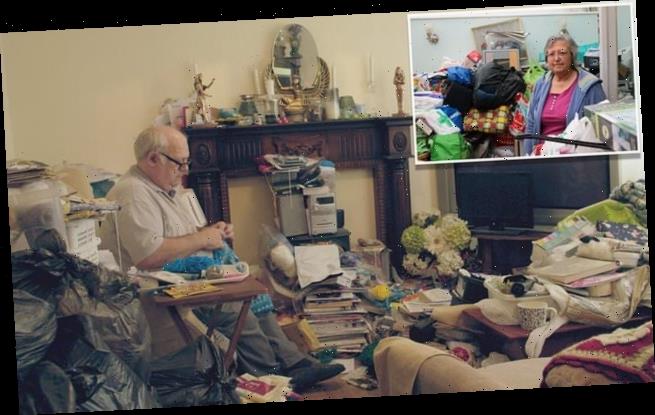 Hoarder who started amassing junk after he lost his wife 18 years ago is shocked into cleaning after a fellow collector admits she ‘can’t breathe’ while visiting his cluttered, fly-infested home

A hoarder who began collecting items when his wife died 18 years ago is shocked into action after a fellow sufferer admits she ‘can’t breathe’ while visiting his home.

Nigel, 64, has accumulated staggering piles of junk including seven sewing machines and yards of wool and fabric, and has a problem with flies in his rubbish-strewn kitchen.

He appears on Channel 5’s Hoarders on Thursday, where he meets Janice, 65, from Liverpool, who began hoarding to cope with loneliness, and the pair discuss the state of their homes.

Janice admits she was ‘frightened’ by the sight of Nigel’s apartment, with the visit motivating her to transform her own living space. ‘There was too much stuff and it was smelly, and I couldn’t breathe,’ she says. 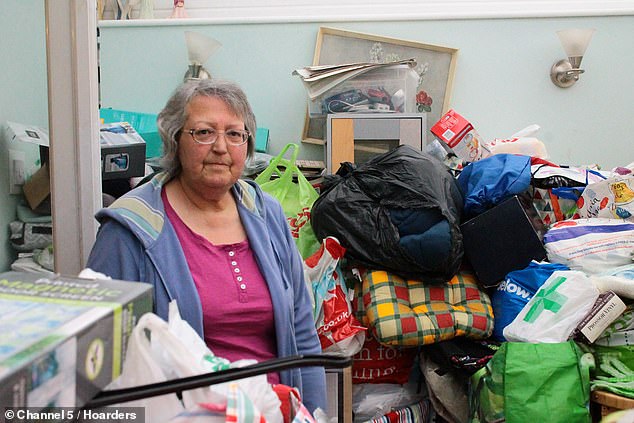 Janice, 65, from Liverpool, appears on Channel 5’s Hoarders, which airs at 9pm on Thursday, where she reveals she began collecting things to help her cope with loneliness 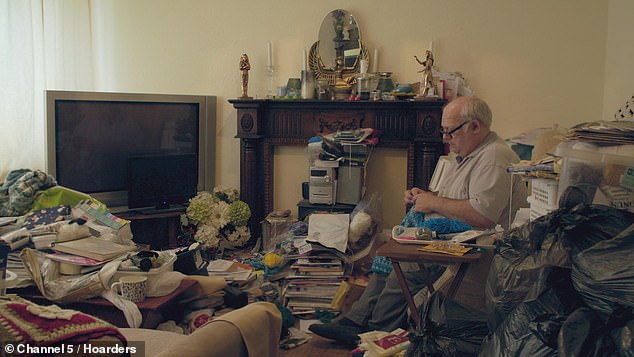 During the programme, Janice is motivated to change after meeting with Nigel, 64, who started hoarding because he could not process the death of his partner Syd in 2002

Janice, who lives in a three-bedroom semi-detached house, explains her habit developed after she began visiting the shops more often out of boredom.

She says: ‘The hoarding started pure out of loneliness. When you go out, you always end up talking to someone; the problem is, you’re always buying stuff, and then you bring it over.’

Janice explains she only recently realised she had a problem, revealing: ‘It was only when I applied for a boiler, that the lady said, “Oh no we can’t do anything, you have to get rid of all this stuff”.

‘It wasn’t until then that I realised there’s quite a lot of stuff here.’ 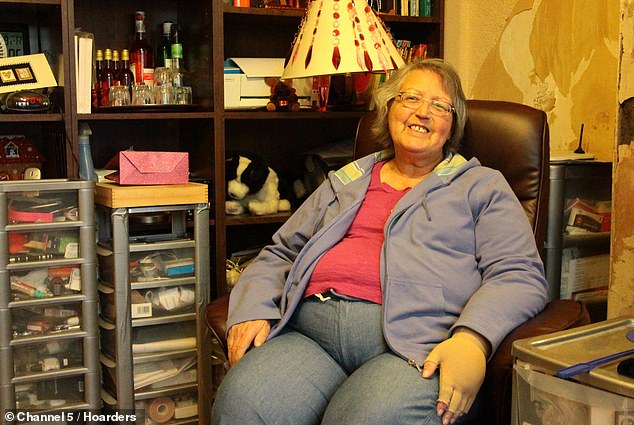 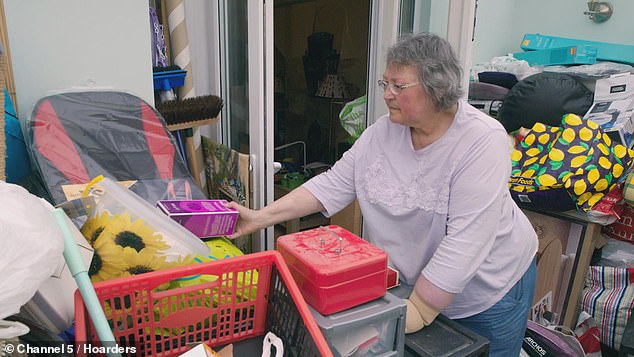 Janice, who lives in a three bedroom semi-detached house, owns mountains of junk which fill the rooms of her home

Meanwhile, Nigel’s hoarding started after losing his partner Syd in 2002, leaving him living alone with his cat.

In 2011, Nigel had his house professionally cleaned by the Declutter Divas – however it wasn’t long before he fell back into old habits.

And the hoarder now owns mountains of junk, which includes seven sewing machines and yards of wool.

He says: ‘I tried to explain to people who don’t have the hoarding disorder how things are, how your emotions go, but they don’t seem to understand it.’ 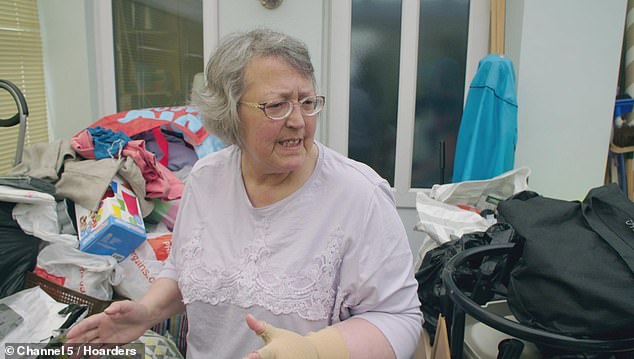 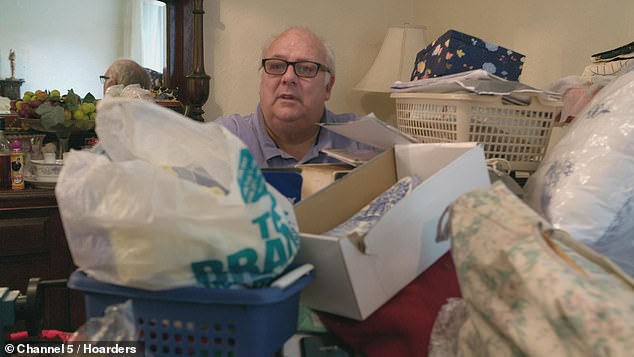 Nigel, who stores countless yards of fabric in his three-bedroom flat, laments the fact that people don’t understand why hoarders live the way they do

Nigel had tried to turn his life around and move on from hoarding, but had been unsuccessful.

A hoarding disorder is where someone acquires an excessive number of items and stores them in a chaotic manner, usually resulting in unmanageable amounts of clutter. The items can be of little or no monetary value.

Hoarding is considered a significant problem if:

He admits being ashamed of the state of his flat and says nobody has visited him in years.

Janice says she hopes seeing Nigel’s flat will help her overcome her own problem, admitting: ‘I am hoping to get some tips on how to maybe not do it again.’

Meanwhile, Nigel says he feels ‘apprehensive’ at the thought of someone visiting his home.

He confesses: ‘I hope because she is a hoarder herself, she will understand more the situation.

Unfortunately, Janice is completely taken aback by the sight of Nigel’s flat, telling him: ‘I don’t know what to say honestly. Do you really need seven sewing machines?’

She asks her fellow hoarder: ‘Do you think people understand hoarders?’

But Nigel is fairly sure that people lack an understanding of the condition, explaining: ‘Most people think you’re lazy, dirty, or can’t be bothered. People just don’t get it.’

The pair then move into the kitchen, which is filled with flies and mounting piles of dust and garbage.

Janice says the visit has scared her into realising how much the issue could spiral out of control, explaining: ‘It’s frightened me a bit, that if it hadn’t have been for a broken boiler, I could have gone further, you know.’ 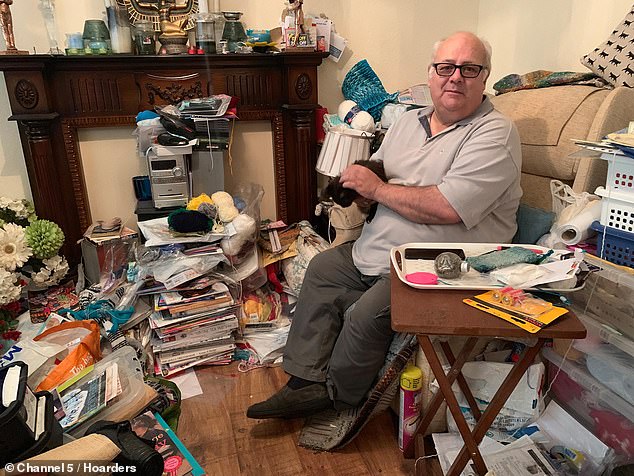 Janice says she struggled to breathe during her visit to Nigel’s flat, while he says her trip has been a ‘wake up call’

‘It’s now got to stop and I need to get back to how I wanted it.’

‘It will make an awful lot of difference to your life,’ Janice encourages him, adding: ‘You would be able to invite people.’

The encounter leaves both hoarders with plenty of food for thought, with Nigel explaining: ‘It was nice to chat with another hoarder and pick up their thoughts on my hoard and little suggestions about what might help.’ 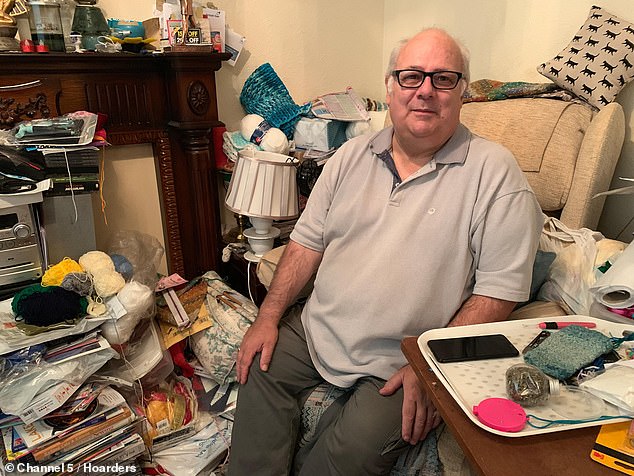 Meanwhile, the shock visit encourages Janice to do something about her own hoarding habit.

She says: ‘I was quite shocked that you could put so much in one tiny space.’

Shortly after returning from Nigel’s, Janice hires a team of experts to help her de-clutter her flat.

Hoarders airs on Thursday at 9pm on Channel 5