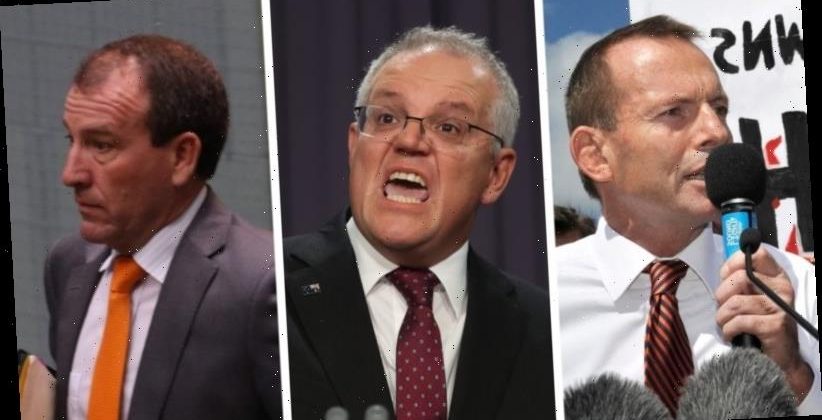 It was a decision that earned Abbott and his colleagues widespread condemnation for standing in front of “ditch the witch” and “Juliar – Bob Brown’s bitch” signs. 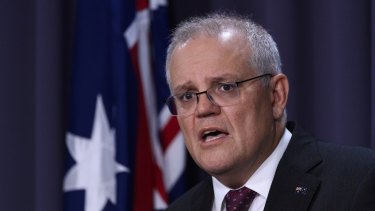 Scott Morrison’s government is being challenged on many fronts in relation to the treatment of women and workplace culture.Credit:Rhett Wyman

And in the decade since, most of which has seen the Coalition in government, the Abbott, Turnbull and Morrison governments have been hit by an escalating series of missteps and scandals relating to women, sex and power that have culminated in a shocking six weeks that have left the government reeling and – more importantly – millions of Australians, women in particular, wondering if the government is listening to them.

Consider some of the early mistakes.

Liberal candidate Mal Brough held a fundraiser that spruiked “Julia Gillard ‘small breasts’” on the menu. Then in Abbott’s first ministry there was just one woman in cabinet and he appointed himself the minister for women; there was the ‘gold-plated’ paid parental leave scheme designed to encourage “women of calibre” to have babies; but Joe Hockey accusing mothers of fraud by double-dipping on paid parental leave.

From there things got worse. Junior minister Jamie Briggs quit after inappropriate behaviour towards a female staffer in Hong Kong; Deputy PM Barnaby Joyce’s affair with staffer Vikki Campion was revealed; Andrew Broad quit over another sex scandal; George Christensen faced scrutiny for regular trips to adult entertainment venues in the Philippines and Scott Morrison joked about making one of his mates “special envoy” to Pamela Anderson. 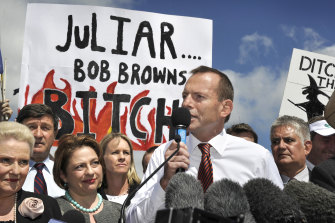 Then Opposition Leader Tony Abbott addresses the crowd during a demonstration against the Labor government’s proposed carbon tax in 2011 with anti-Gillard signs in the background.Credit:AP

Morrison called a snap press conference on Tuesday to call out the “rubbish and crap” women faced and spoke to the party room and Coalition MPs soon afterwards. But even this blew up in his face after the Prime Minister made incorrect claims about a journalist at News Corp who had allegedly been harassed in a women’s toilet.

The shock claim triggered a rebuke from News Corp Australia to the Prime Minister after his assertion the company was dealing with a human resources complaint over the matter.

The government faces two existential questions. Does the Coalition have a problem with women? And can it survive?

“Abbott’s ‘ditch the witch’ campaign [appearance] essentially licensed misogyny in the party. I’m not a great fan of [Julia] Gillard but the treatment of her was shocking. [John] Howard would never have gone to that protest, that was a turning point for the party,” she says. “Since Abbott they have been driven by aggression.”

Marija Taflaga, a politics lecturer at the Australian National University, suggests most Australians at the start of 2021 would have expected an early election and a Coalition victory off the back of Morrison’s handling of the pandemic.

That’s not the case now.

“Their position [the government] has deteriorated. Even if you believe no one cares about this issue, they aren’t talking about their own agenda. Look at the coverage this week. It should have been about the floods, with the PM as mourner-in-chief, but instead he’s spent the week saying sorry to everyone while the opposition watches Rome burn,” she says.

Former senator Judith Troeth, a hugely respected Liberal who spent 35 years in the Liberal Party machine and then in parliament, hasn’t given up on Morrison and the government being able to recover from the slew of recent scandals.

“It is recoverable, and I would say that for any party in power. What needs to happen is structures, a human resources setup in parliament, so there are independent officers to whom staff can go and report instances of behaviour like this.”

She is in no doubt that quotas – a proposal the prime minister opened the door wider to this week – are part of the answer.

“The ALP overcame this issue by having quotas and their factional arrangements, which make it easier to get individuals into a position where they will be elected. Some in the Liberals have always had a view that women are not up to the rigours of Parliament – the travel, the work, the policy examination and dare I say it, running the country,” Troeth says.

“I think with the Liberal Party all the state divisions need to rethink their preselection processes and if necessary adopt quotas. There is no doubt the presence of women in Parliament has an improving effect on Parliament.” 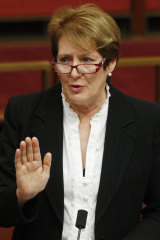 Former Liberal senator Judith Troeth has given up on Morrison and the government being able to recover from the slew of recent scandals.Credit: Glen McCurtayne

Troeth, unlike Brett, doesn’t draw a line from the “ditch the witch” episode – which she labels a “complete lapse in professional and personal taste” – and the current scandals, for which there needs to be a more thoroughgoing solution.

“Brittany Higgins’ [allegations] should be investigated fully and so should be some of the most recent allegations, the antics in offices, there should certainly be an investigation to bring into light what happened and who did it.”

Taflaga says it’s not so much a case of Liberals having a problem with women but that “politics is a gendered workplace” both formally and informally. Quotas could help fix the problem.

She points out that in the 1990s, Labor introduced quotas despite objections from some men – and even some women – but two decades later the party has 47 per cent of its seats occupied by women in Parliament, compared to 24 per cent in the Liberal Party (down from a peak of 25 per cent under Howard in 1998).

“The politics of gender-based discrimination – and by extension, quotas – in the Liberal Party is really difficult. Moderates are all for it, just like women running business or being CEOs, but conservatives are troubled because it’s a threat to the family and it circles back to the merit argument. Some resist admitting the idea that women face problems as a group.”

Brett says that Brittany Higgins licensed “the opposite of ditch the witch”: “She [Higgins] had already lost her job, she was furious and it’s like once the dam wall has been breached now all of this stuff has come out. There has been a deluge of things and we don’t know where it will stop.”

While the Coalition’s standing has not yet fallen to the nadir of John Major’s Conservative British government in the mid-to-late 1990s – which touted a values-based “back to basics” approach only to be plagued by a series of sex-related scandals – the signs do not augur well.

As one veteran Coalition staffer observed: “Rudd and Gillard, it took three years of work to take them down. We’ve taken ourselves down in six weeks.”