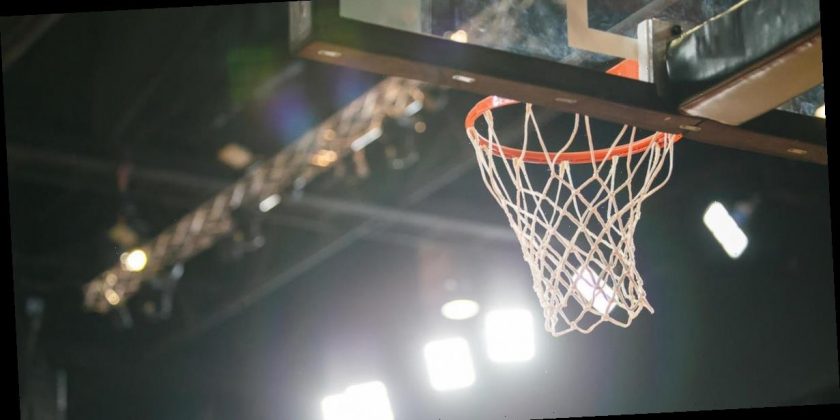 A high school sports announcer has come under fire for racist remarks he made about a girls basketball team while they were kneeling during the national anthem. On Friday, the announcer blamed his actions on his diabetes.

Matt Rowan made the remarks Thursday at a game between Norman High School and Midwest City in the Oklahoma 6A State Basketball Tournament. In a recording of the broadcast, broadcasters are heard telling viewers that the broadcast would return after the national anthem, but the mics were never turned off while the anthem played.

When girls from Norman High kneeled, broadcaster Rowan immediately criticized them, saying, “I hope Norman gets their ass kicked.”

He then called the students the N-word. Video of the live broadcast was recorded and shared online.

In a press statement released on Friday, Rowan said he “most regrettably made some statements that cannot be taken back,” and blamed his remarks on a spike in blood sugar.

“During the Norman High School girls basketball game against Midwest City, I made inappropriate and racist comments believing that the microphone was off; however, let me state immediately that is no excuse such comments should have been uttered,” he said.

“I will state that I suffer Type 1 Diabetes and during the game my sugar was spiking. While not excusing my remarks it is not unusual when my sugar spikes that I become disoriented and often say things that are not appropriate as well as hurtful,” he continued. “I do not believe that I would have made such horrible statements absent my sugar spiking.”

Rowan has not returned CBS News’ request for comment. 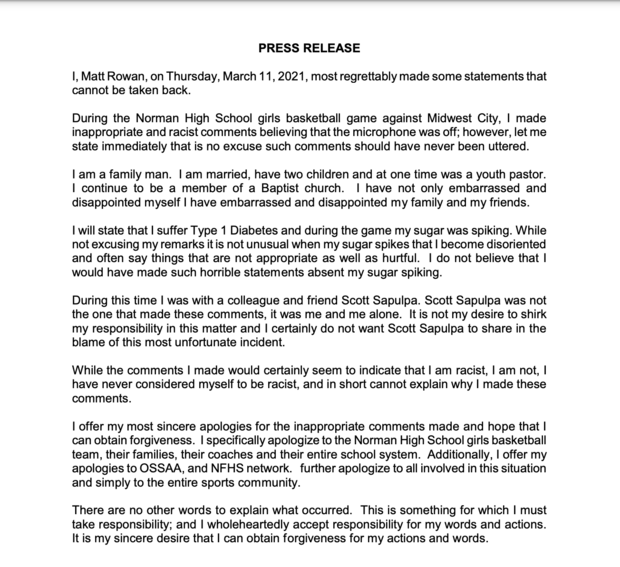 Fred Henderson, whose daughter plays for the Norman team, told CBS affiliate KWTV that Rowan’s comments are “just a sign of the times,” and that the comments deeply affected his daughter.

“She’s not taking it very well. Me and my wife just try to tell her to keep her head up, just pray and try to concentrate,” he said.

The Norman community released a video on Friday with the title “#ThisIsWhyWeKneel.” In it, teachers, school staff and community members, many clearly emotional, tell the girls impacted by the comments that they are proud of them and stand with them in the fight against racism and bigotry.

“I just want to remind you that there is no room in this world for hate and I am so sorry that you are having to go through this and be on the other end of those hateful words,” said art teacher Tauri Sims. “But I want you to know that you have 100% support from your school, from your teachers at your school, from your community. We love you, we are proud of you. Just keep doing what you are doing because you are doing a wonderful job.”

Norman High School varsity football defensive line coach said in the video that “obviously this wasn’t about respecting the national anthem, otherwise bozo wouldn’t have talked over it the entire time.”

“Something else is bothering him, which is disgusting,” he said. “The best thing you can do I think is to go win the whole dang enchilada, which I know you can and I think you will.”

Many who have Type 1 Diabetes quickly commented on Rowan’s statement on Twitter, saying they are “embarrassed and offended” that someone would use the condition as an excuse for racist behavior.

My 17 yr old was diagnosed at 7, never has he uttered a racist comment in front of me despite serious loss and high. BECAUSE I RAISED HIM TO NOT BE A RACIST. I’m so annoyed and infuriated right now.

Rowan, who says he is a former youth pastor, insisted in the press release that he is not racist, and that he “cannot explain” why he made the comments.

The racist remarks prompted many of those affiliated with Rowan and his company to cut ties.

“We fully support our students’ right to freedom of expression and our immediate focus is to support these girls and their coaches and families, particularly our Black students and coaching staff,” Migliorino said. “It is tragic that the hard work and skill of this team is being overshadowed by the vile, malignant words of these individuals.”

The National Federation of State High School Associations (NFHS) issued a statement saying it was “sickened” by the remarks, and that it has cut ties with the “third-party production crew” that was involved. While it did not specifically name Rowan’s production company, OSPN Live, the company has seemingly been removed from the NFHS website.

“The thoughts expressed in no way represent our network, and we are outraged that they found their way into the production. We are aggressively investigating the incident and have immediately cut ties with the third-party production crew that was involved.”

The network said it “firmly condemns racism, hate and discrimination,” and apologized to students and others who were impacted by the comments.

“As an organization dedicated to empowering students and young people through high school sports and athletic programs and making their achievements accessible to all in their communities and beyond, this incident is a direct violation of our mission as a company.”

The company Fastenal, which was previously listed as a sponsor of OSPN Live, tweeted on Friday night that it has “officially severed ties with Matt Rowan and OSPN Live.”

On Saturday, it appeared that the Facebook page and website for OSPN Live had been taken down.