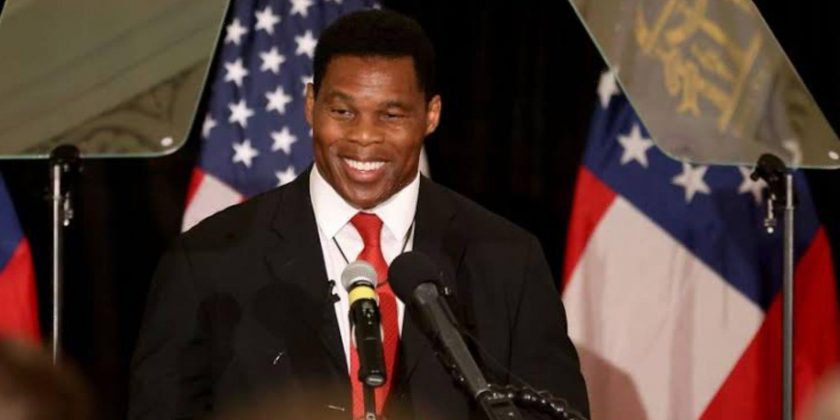 American football running back who played in the National Football League (NFL) for 12 seasons Herschel Walker says he wants to completely ban abortion, likening it to murder and claiming there should be “no exception” for rape, incest, or the life of the mother.

Unfortunately, the Republican candidate has supported at least one exception—for himself.

Sen. Rick Scott, R-Fla., the chair of the National Republican Senatorial Committee, stood by Walker on Tuesday in an aggressive statement describing the report as a smear — without saying which parts were false, per NBC News.

“When the Democrats are losing, as they are right now, they lie and cheat and smear their opponents. That’s what’s happening right now. They know they are on the verge of losing the Senate, and they know that Herschel Walker is winning, so they have cranked up the smear machine,” Scott said. “Herschel has denied these allegations and the NRSC and Republicans stand with him, and Georgians will stand with him too.”

The top-spending Republican super PAC in Senate races is also refusing to ditch Walker, who is challenging Democratic Sen. Raphael Warnock in November.

“We are full speed ahead in Georgia,” said Steven Law, president of the Senate Leadership Fund, an outside spending group closely aligned with Senate GOP Leader Mitch McConnell. “This election is about the future of the country — Herschel Walker will make things better, Raphael Warnock is making it worse. Anything else is a distraction.”

RELATED: These Are The 10 Most Valuable Football Leagues In The World

And former President Donald Trump, who had encouraged Walker to seek the Senate seat, asserted in a Tuesday afternoon statement posted to his social media site that the former football star was “being slandered and maligned.”

“Herschel has properly denied the charges against him, and I have no doubt he is correct. They are trying to destroy a man who has true greatness in his future, just as he had athletic greatness in his past,” wrote Trump, who survived an October surprise of his own in his 2016 presidential run: the surfacing of an old “Access Hollywood” tape in which he was heard bragging about sexually assaulting women.

The swift decision by Republican leaders to rally around Walker’s turbulent candidacy is the product of the enormous stakes of the Senate race in Georgia. The state was crucial in the 2020 election cycle at giving Democrats the majority and could decide control of the chamber again this fall. Disowning Walker would be akin to ceding the race, GOP operatives fear, as they see little chance of capturing the Senate majority without Georgia amid growing pessimism about other pickup opportunities like Arizona and New Hampshire.

The Georgia race is neck and neck: Warnock led Walker by 5 points in a recent Fox News poll and by 2 points in a CBS News poll, the latter result within the margin of error.

A woman who asked not to be identified out of privacy concerns told The Daily Beast that after she and Walker conceived a child while they were dating in 2009 he urged her to get an abortion. The woman said she had the procedure and that Walker reimbursed her for it.

She supported these claims with a $575 receipt from the abortion clinic, a “get well” card from Walker, and a bank deposit receipt that included an image of a signed $700 personal check from Walker.

The woman said there was a $125 difference because she “ball-parked” the cost of an abortion after Googling the procedure and added on expenses such as travel and recovery costs.

Additionally, The Daily Beast independently corroborated details of the woman’s claims with a close friend she told at the time and who, according to the woman and the friend, took care of her in the days after the procedure.

The woman said Walker, who was not married at the time, told her it would be more convenient to terminate the pregnancy, saying it was “not the right time” for him to have a child. It was a feeling she shared, but what she didn’t know was that Walker had an out-of-wedlock child with another woman earlier that same year.

Asked if Walker ever expressed regret for the decision, the woman said Walker never had. Asked why she came forward, the woman pointed to Walker’s hardline anti-abortion position.

“I just can’t with the hypocrisy anymore,” she said. “We all deserve better.”

After The Daily Beast reached out to the Walker campaign for comment, Robert Ingram, a lawyer representing both the campaign and Walker in his personal capacity, responded.

“This is a false story,” Ingram said in a phone call, adding that he based that conclusion on anonymous sources.

Ingram asked The Daily Beast to disclose the identity of the woman, but we declined.

After the story published, Walker released a statement in which he called the story a “flat-out lie” and said he denied it in the “strongest possible terms.”

“I’m not taking this anymore. I planning [sic] to sue the Daily Beast for this defamatory lie. It will be filed tomorrow morning,” he said.

Meanwhile, Herschel’s adult son, Christian Walker, lashed out on Twitter—in defense of The Daily Beast and against his father.

“Every family member of Herschel Walker asked him not to run for office, because we all knew (some of) his past. Every single one,” Walker tweeted.

“He decided to give us the middle finger and air out all of his dirty laundry in public, while simultaneously lying about it.

The woman, who also provided proof of her romantic relationship with Walker, told The Daily Beast that he mailed her the check inside the “get well” card.

The front of that card features a drawing of a steaming cup of tea and reads, “Rest, Relax…” The message continues on the inside of the card: “…Recover.”

The card is signed, “Pray you are feeling better,” with an “H” in Walker’s distinctive autograph flourish.

The woman, a registered Democrat who still communicates with Walker, said he did not tell her about his plan to run for the Senate before his announcement in August 2021. Since then, however, one of Walker’s top surrogates has asked her repeatedly if she would be willing to vouch for his character, reaching out as recently as this August.

In a 40-minute phone call this June about one of his out-of-wedlock children, The Daily Beast pressed Walker repeatedly on whether he had ever knowingly had an abortion with any of his past partners. After dodging the question multiple times, he ultimately said he had not.

Following the Supreme Court’s repeal of Roe v. Wade in July, abortion rights have become a pivotal campaign issue across the country. The ruling fueled spikes in voter registration and turnout in contests nationwide, especially among women. A recent CBS/YouGov survey found that likely Georgia voters who said the abortion issue is “very important” were more than twice as likely to support Warnock, 67 percent to Walker’s 32 percent.