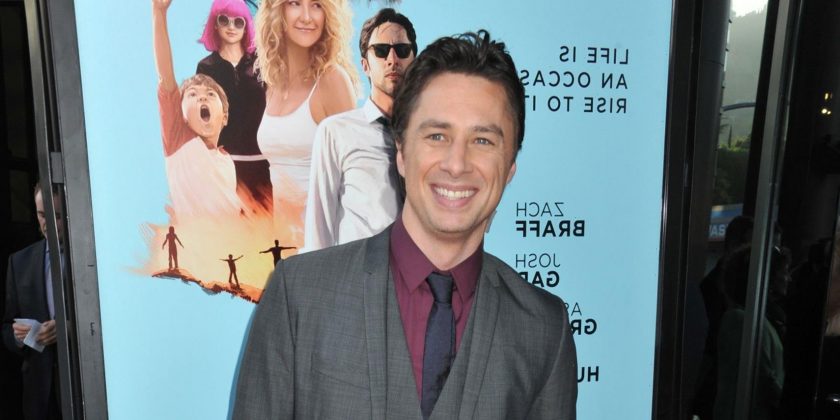 Zach Braff has become a Hollywood A-Lister best known for his work on the medical sitcom Scrubs and as a prolific filmmaker and for appearing on stage for successful Broadway productions.

Hailing from South Orange, New Jersey, Zach Braff was one of the first people in his family to enter the world of acting. After studying film in college, he audited for various television shows and movies before landing a role in the sitcom Scrubs which pushed him into the limelight and made him a recognized face in Hollywood. While continuing his work on the show, Braff also pursued his love of filmmaking, creating and writing movies that entered various film festivals. His work has earned him several Emmy and Golden Globe nominations.

From starting his career as a production assistant and simultaneously auditioning for work to starring in one of the best medically realistic shows that aired on television, Zach Braff has expanded his portfolio by directing, writing, and becoming a podcaster. A man with versatility, let’s take a look at how Zach Braff became a Hollywood A-Lister.

Zach Braff comes from a family of intellects as his mother is a clinical psychologist while his father is a trial attorney. The star found his calling in the world of acting after he graduated from Columbia High School. Braff enrolled at Northwestern University, studying BA in Film. Additionally, he worked as a production assistant for music videos while completing his graduation. After his first CBS pilot failed, he continued striving through auditions before being called for a role in a new sitcom Scrubs in 2001. According to US Weekly, Braff auditioned six times before landing the lead role of John Michael “J.D.” Dorian, M.D on the show.

RELATED: A Peek Inside The Lavish Life Of 6IX9INE, How He Made His Fortune, And How He Spends It

Along with starring in the successful show, he directed several episodes and became an executive producer for the ninth season. While his television career continued to accelerate, Braff ventured into his love for filmmaking in 2004 with his directorial debut Garden State. After writing the script, it was rejected several times, and the producers who financed it had doubts about its performance. Surpassing all expectations, the film was a box office success and collected $35 million on a mere $2.5 million budget. Zach Braff also starred in the movie and received critical appraise for the film’s soundtrack, which won him a Grammy Award for Best Compilation Soundtrack for a Motion Picture, Television, or Other Visual Media in 2005, as noted by IMDB.

While struggling in the late 1990s, Zach Braff made his stage debut in New York City’s Public Theatre production of Macbeth, but it wasn’t until 2002 that he returned to work in plays. With the same theatre production, he appeared in another Shakespeare production of Twelfth Night in 2002. Eight years later, the actor returned with an off-Broadway production of Trust in 2010, followed by the successful play he wrote, All New People in 2011, which was performed in New York and later in London and Manchester, as stated by Celebrity Net Worth. In 2014, he made his most acclaimed Broadway appearance starring in Bullets Over Broadway The Musical.

After his success with the 2004 directorial debut, Braff returned to filmmaking a decade later with Wish I Was Here. The film became a moderate success at the box office and allowed him to direct the comedy crime movie Going in Style, which starred Morgan Freeman, Michael Caine, and Alan Arkin. Braff went beyond Hollywood when he opened a seafood restaurant Mermaid Oyster Bar in New York.

After Scrubs ended in 2010, Zach Braff continued working on new television shows that garnered moderate success. Moving on from television, he focused on working on digital releases across various OTT platforms. The actor starred in the Disney+ remake of the movie Cheaper By The Dozen and the HBO Max release Moonshot in 2022. Braff also played a small role in the same year’s first season of the popular Disney+ miniseries Obi-Wan Kenobi.

Amidst the lockdown in 2020, Zach Braff teamed up with his former Scrubs co-star and best friend Donald Faison and started the podcast Fake Doctor, Real Friends, which functions as a behind-the-scenes commentary on each episode of the show. As mentioned by the Washington Post, the nostalgia for TV-rewatch commentary as a podcast was loved by audiences who enjoyed listening to the actors and special guest stars detail their time working on the show. The weekly comedy podcast has crossed 600 episodes to date and continues to engage the audience with their anecdotes from every episode that airs on television.

Zach Braff has established himself as one of the most versatile artists in Hollywood through his work as an actor, filmmaker, writer, and music collaborator. His work has remained iconic over time and continues to entertain audiences even today. Braff is currently working on the production of his upcoming 2023 movie A Good Person starring Florence Pugh and Morgan Freeman.

READ NEXT: A Look At The Most Expensive Houses Snoop Dogg Has Lived In