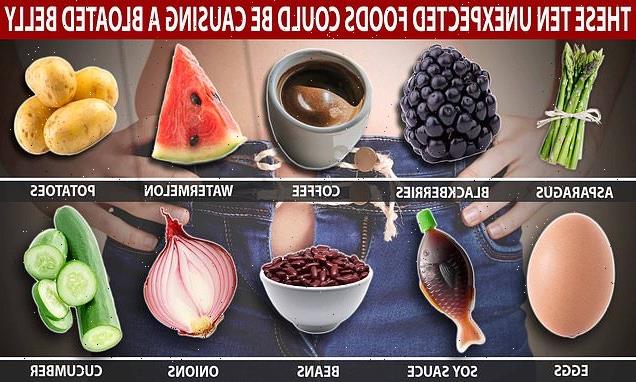 Everything you need to know about bloating: From surprising trigger foods such as cucumber to easing your symptoms with turmeric

Most people will have felt with the painful ballooning of an uncomfortable bloated tummy.

It’s a common symptom, for which relief remedies are endlessly discussed.

But what are the best ways to deal with the pain, and can it be prevented?

According to the NHS the discomfort, which most commonly occurs due to gas in the gut, can be caused by ‘some food and drinks, such as some vegetables and fizzy drinks’ or even through ‘swallowing air when you eat’.

There are some common suspects such as cabbage, beans, or lentils.

However, what else causes bloating? How can you stop it? And what could be the underlying reasons?

Here is everything you need to know. 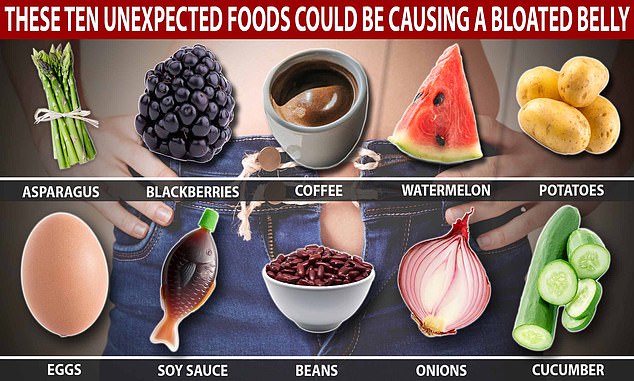 WHAT CAUSES BLOATING AND WHAT ARE SYMPTOMS OF IT?

Bloating is most commonly caused by having a lot of gas in your gut as a result of eating certain foods and beverages or even swallowing air.

According to the NHS, symptoms include your tummy feeling bigger or fuller than usual, stomach pain and discomfort, tummy rumbling and passing has more frequently.

Other causes may be digestive issues such as constipation, food intolerance, coeliac disease, or irritable bowel syndrome (IBS).

There are times when consistent bloating which isn’t going away may be a sign of something more serious, such as ovarian cancer.

TOP 10 SURPRISING FOODS WHICH MAY CAUSE BLOATING

Asparagus is one of the many vegetables that can lead to undesirable digestive symptoms. The high fibre content can cause gas to be produced during the fermentation process.

This fruit can take longer to digest than others as they are high in polyols (sugar alcohols) which can be difficult to break down in the body.

Coffee contains caffeine which can irritate the gut and lead to bloating. Also, some of the acids in coffee are known to upset sensitive stomachs.

Watermelon is packed with fructose, which is a naturally occurring sugar that can cause bloating when consumed in large amounts.

The starch content in potatoes makes them a high gas-producing carbohydrate. Try swapping potatoes for rice as rice is the only carbohydrate that does not cause gas.

Fructans are soluble fibers that are found in onions and can cause digestive issues. Red onions have high levels of these fibers, so switching to a white onion may help.

These legumes contain sugars called oligosaccharides, which although may be naturally occurring, our bodies can find difficult to break down.

Gluten is a major ingredient in soy sauce and this can cause inflammation throughout the body. Many people may actually have an intolerance to gluten without actually knowing it.

Some people may find that eggs will upset their stomach and sensitivity to them can cause gas and bloating. The sulfur in eggs is also the culprit for the foul smell produced when releasing wind.

Cucumbers are high in a chemical compound called cucurbitacin which can cause gas production in the body.

WHICH FOODS CAN CAUSE BLOATING?

While some vegetables and beverages – like dairy and carbonated drinks – are highlighted as bloat-risks, the blame is also often pinned on processed foods.

According to Healthline, these are ‘packaged goods, such as breads, snack foods, cereal, and salad dressing’ which ‘contain a variety of ingredients, including fructose and lactose’.

Bloating – and trapped gas – can occur when these two are being digested.

However, fitness experts at Breaking Muscle say that it’s important to note that common bloating triggerers, such as sugars, lactose and gluten aren’t just limited to processed foods.

They add: ‘There is a common perception that only highly processed foods can cause stomach irritation, bloating and poor gut health, but that is wrong

‘Sugars, lactose and gluten are present in many food items and they can often be unkind to our insides, even if they’re coming from natural sources

‘Beans are a great example of this and they are famous for flatulence for a reason. They contain sugars called oligosaccharides, which can make it all the way to the large intestine undigested.

Once it gets there, the fermentation process releases gas which can cause stomach irritation and wind.’

The fitness experts also collated a list of the top ten surprising foods to avoid which may cause bloating.

HOW CAN I PREVENT AND RELIEVE BLOATING?

The NHS advises that regular exercises can improve digestion and prevent bloating, as well as aid with symptoms of it.

To deal with symptoms, it also recommends chewing with your mouth closed ‘to avoid swallowing air’, drinking plenty of water, eating fibre-rich foods, pacing your meals differently and massaging the stomach from right to left to release trapped wind.

Drinking lots of fizzy drinks, alcohol, or caffeine in coffee and tea; eating foods which are known to cause gas; slouching when eating; eating big meals before bed; or consuming food which is processed, sugary, spicy, fatty, or contains ingredients you’re intolerant to are all triggers.

Breaking Muscle advises that when it comes to preventing bloating through your diet, the answer if often as simple as trial and error.

The expert says: ‘For most of us, the simple way of finding out if certain foods don’t sit well is purely through trial and error.

‘Removing and replacing certain things from your eating pattern will help build a comfortable diet.

‘It’s important to bear in mind that everyone is different and what works for someone else may not work for you.

‘Taking more time to chew, staying hydrated, and being mindful of food intake limits, can all be factors that can reduce bloating too.’

Healthline also recommends a series of exercises which may help, ranging from yoga positions such as Torso Twists and the Cat-Cow pose to a simple brisk walk.

Yoga has been particularly hailed as helping out with easing belly bloat discomfort.

Health advises a series of poses, ranging from more relaxed ones to more advanced attempts.

Those suffering with a bloat might try hugging their knees to their chest, to help expel any trapped gas which is causing pain.

Other classic poses to target the abdominal area include a ‘Bridge’ pose – in which a person lies on the floor lifts their pelvis up, keeping shoulders down.

A seated forward bend is also recommended, for encouraging an all-round stretch and relaxation of the body.

‘Child’s pose’ – in which you sit on your knees and lean forward on the floor, arms stretched out in front – is also helpful with providing the body, and particularly the lower back and abdomen, with a stretch.

Some over the counter medications may be able to soothe symptoms too.

Antacids like Rennie, which are often marketed as helping with indigestion, may aid in alleviating discomfort.

A type of medicine called simeticone or (simethicone) – an antiflatulent – is also commonly used to help with trapped wind, bloating, and colic in babies.

According to the NHS, it is sometimes taken by people with IBS.

Activated charcoal – renowned for its detoxing qualities – has also in past been recommended, as well as making sure your body is getting enough sleep to aid proper digestion and even chewing sugarless gum to help your tract move things along.

Probiotics may also be helpful by nourishing ‘good’ bacteria in your gut for healthy digestion which then goes on to break food down properly, and expel excess gas.

Behind almost every issue are natural remedies some swear by.

Mint tea has been listed by many as aiding with bloating. The Healthy blog says that this is because the herb contains menthol, which appears to help with the flow of bile to help food be passed more quickly.

Reports also say it relaxes muscles, which can let trapped gas pass through.

Another miracle ingredient hailed for helping with digestion is turmeric. 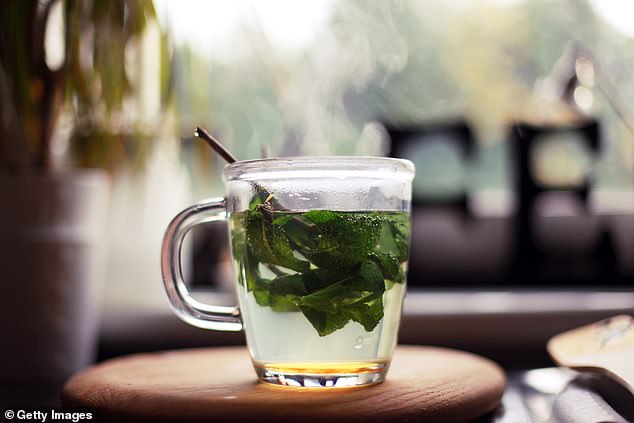 Mint tea has been listed by many as aiding with bloating. The Healthy blog says that this is because the herb contains menthol, which appears to help with the flow of bile to help food be passed more quickly (stock image)

Turmeric is a plant from the ginger family and can help balance body energy and boost the immune system.

It has long been hailed as a super spice, as its essential oils act directly on the skin of the gut to heal wounds and reduce inflammation, which can have knock-on effects on inflammation in other parts of the body.

Turmeric also acts as food for the good bacteria in our gut and can help to encourage a healthy digestion, which is beneficial for mind and body. The best way to add it into your diet is to flavour dishes with it, blend into a smoothie or drink it as a tea.

Another ingredient more have been turning to to tackle indigestion issues is artichoke leaf extract.

According to SF Gate, studies show this flower bud has been researched in treating and alleviating symptoms of IBS.