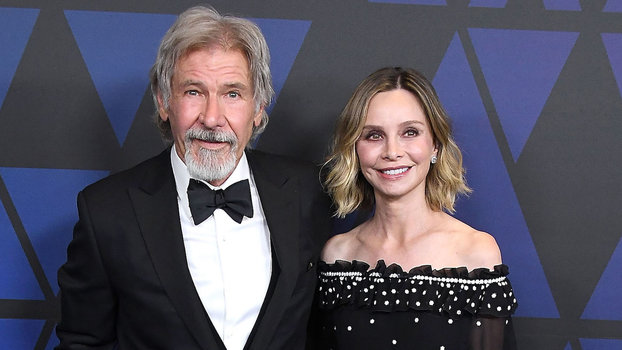 Harrison Ford and Calista Flockhart had a date night worthy of their collective star power at Governors Awards in Los Angeles on Sunday night.

Ford, 76, arrived sporting a black tux, bow tie and a new goatee. Flockhart, 54, matched his colors with a black and white dress and black pumps.

The Indiana Jones and Ally McBeal stars met at the 2002 Golden Globes, but kept their relationship quiet until 2003.

“I’m in love,” Ford told Hello! Magazine in 2003. “Romantic love is one of the most exciting and fulfilling kinds of love and I think there is a potential for it at any stage of your life. I was not surprised that I was able to fall in love, and I wasn’t surprised that I did.”

Ford proposed to Flockhart on Valentine’s Day in 2009, and the couple married in Santa Fe in June of 2010.

“Harrison and Calista are all about family life,” an insider told People of the couple at the time. “Their life before and after they got married is focused on Liam.”

The pair share a son, Liam, 17, whom Flockhart adopted at birth, as well as four older children from Ford’s two previous marriages.

RELATED: FYI: The New Han Solo Is Just as Hot as Harrison Ford

While Ford may still be getting the hang of emojis, Flockhart says the couple’s age difference doesn’t bother her.

“It doesn’t faze me. Sometimes I even say, ‘Wow, I keep forgetting that he’s 22 years older than me’,” Flockhart told Hello! Magazine in 2003. “It doesn’t factor into our relationship at all. I like the way he looks first thing in the morning. It’s not handsome, it’s more cute. He looks like a little boy.”

This article originally appeared on People. For more stories like this, visit people.com.