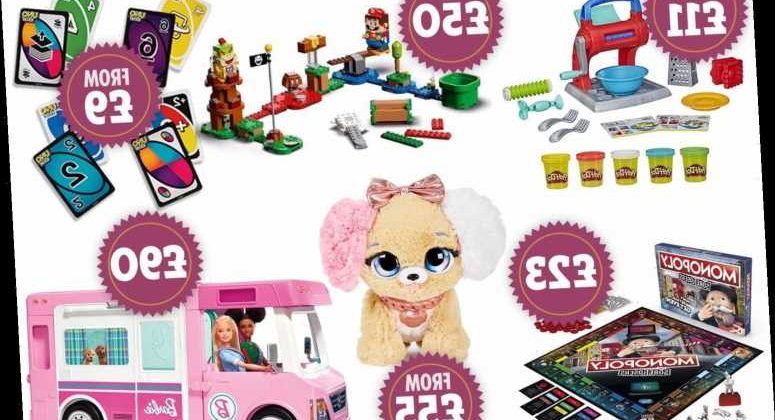 HAMLEYS has revealed its list of the the top toys for kids this Christmas.

The famous toy shop knows what kids like and predicts that gifts of classic toys like Monopoly and Barbie's campervan will be a hit with them on Christmas day. 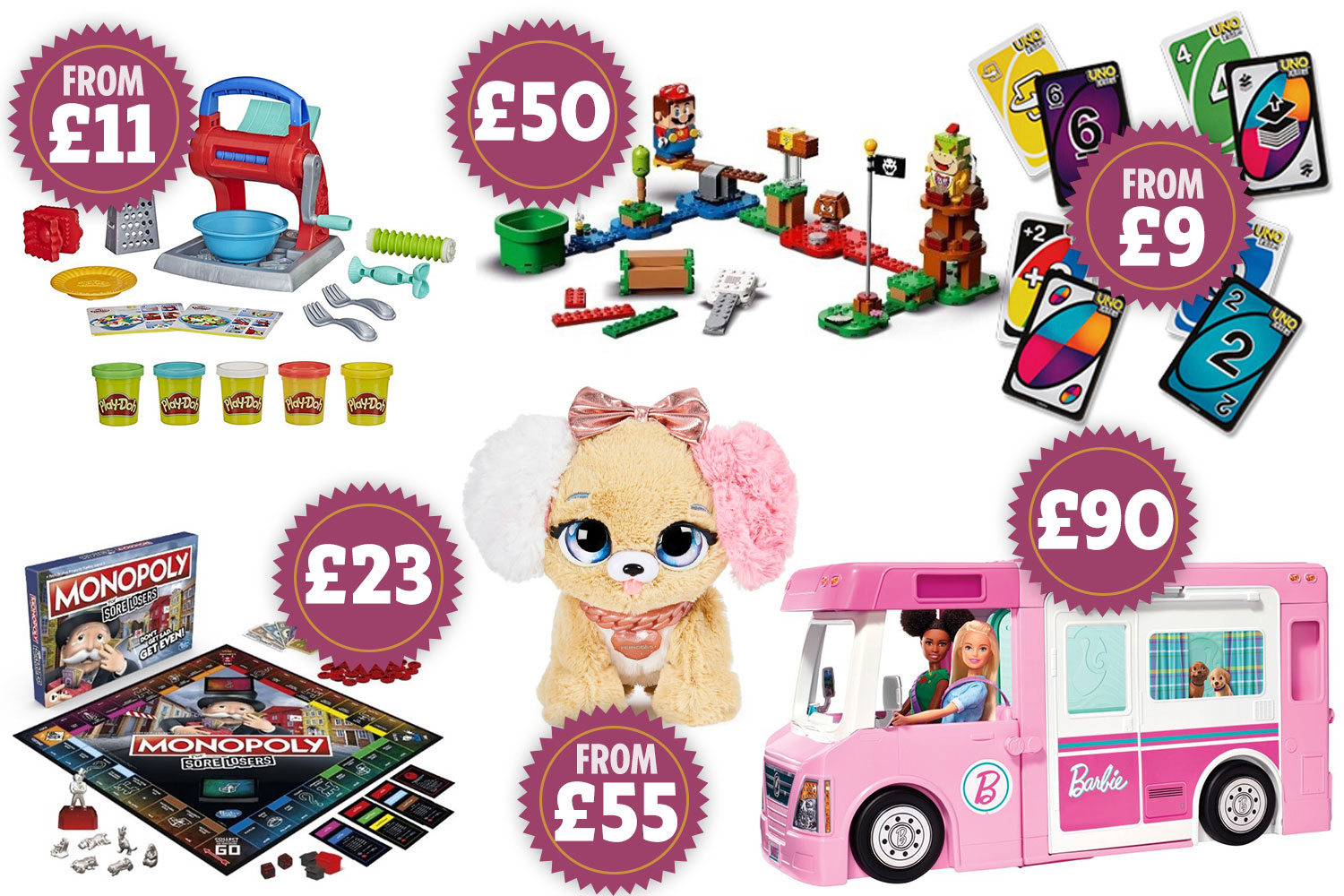 There's a retro feel to Hamley's annual list of top toys for Christmas, with Super Mario Lego, Cluedo and Uno also making the list of must-haves.

The toy store, famous as a London landmark, believes this Christmas families will want toys which bring them togeteher.

Victoria Kay, head of buying at Hamleys said: “Creating some simple Christmas magic feels more important this year than ever and we think there’s lots of memorable and affordable fun to be had with our 2020 hot picks.

"From clever tech to lovable animatronic pets and classic family games to be played around the table, we can see carefree, shared play and togetherness featuring heavily this year.” 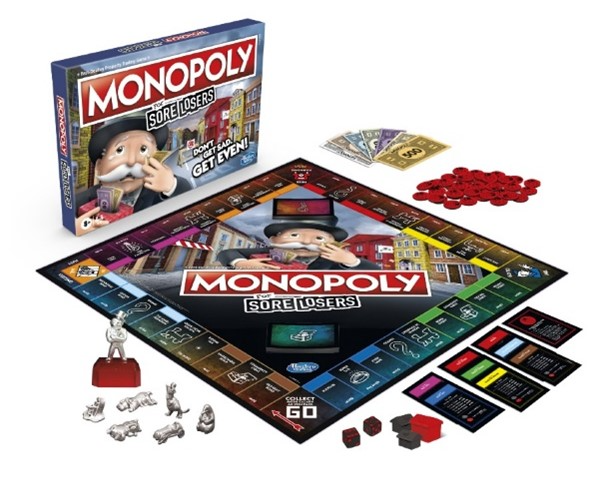 Who doesn't love a game of Monopoly? And this year it comes with a twist.

No longer will the winner be able to gloat for passing Go on their way to first place.

Instead, players earn cash for the things which normally hold back losers of the game, like going to jail and paying rent.

The game is on sale online at Hamleys for £23 and while we've found it on sale at Smyths for £17.99 and £20 at Argos you'll have to pay for delivery if you're ordering online. 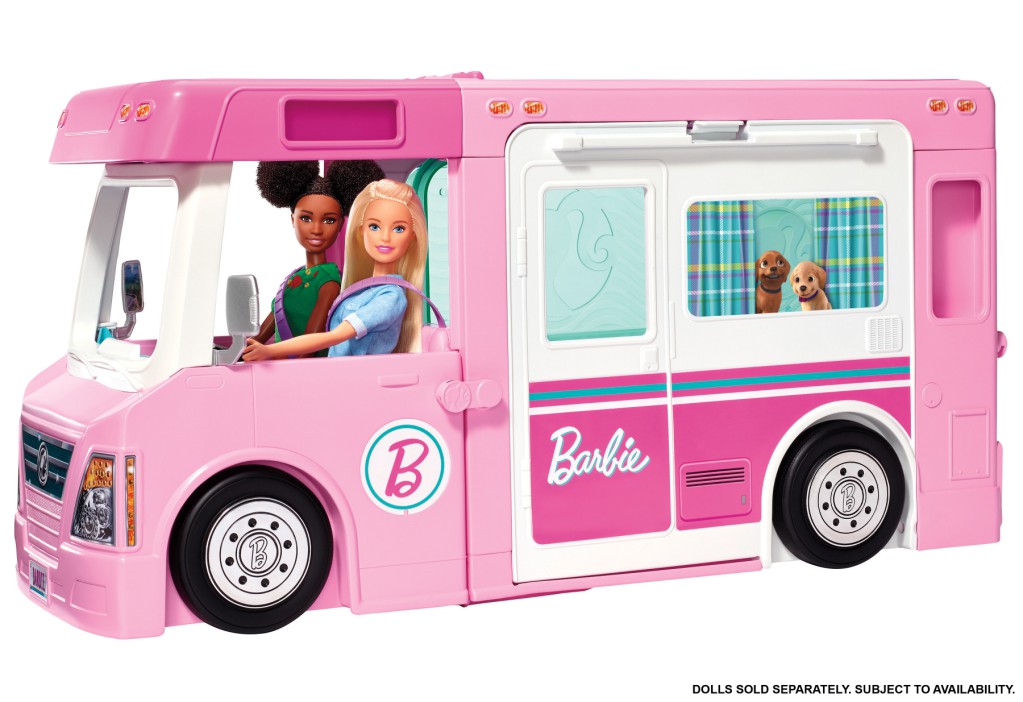 Even Barbie is having a staycation this year.

She's hitting the road in the 3 in 1 campervan which turns into 3 different vehicles and 5 different living spaces, including a patio with pool.

There are 50 play pieces with this set which costs £90 from Hamleys.

We found this cheaper elsewhere too, reduced to £73.99 at Smyths and £74.99 at The Entertainer and there's free delivery from both for an order of this value. 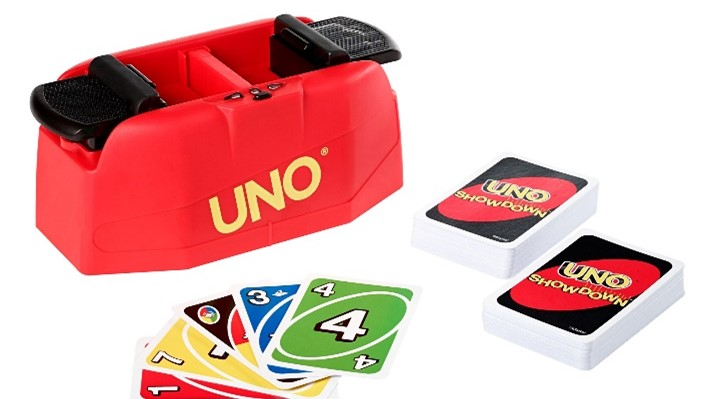 Another classic family game, Uno, comes with a twist.

Uno Flip comes with double-sided cards and you can play the "light" side as normal, or the "dark" side which comes with tougher penalties – and there's a flip card which can force a player to change sides.

Uno Showdown adds an extra element of surprise with players having to race to hit the paddle when a signal goes off – cards go flying at the slowest.

Uno Showdown, which was also named one of Amazon's top Christmas toys, is £20 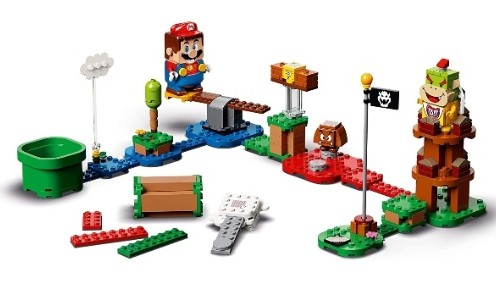 The set brings the computer game to life, creating levels with Lego bricks and a responsive Mario figure which can pick up virtual coins along the way.

A range of retailers including Amazon, Smyths and John Lewis have it for £44.99, though you may have to pay delivery costs on top. 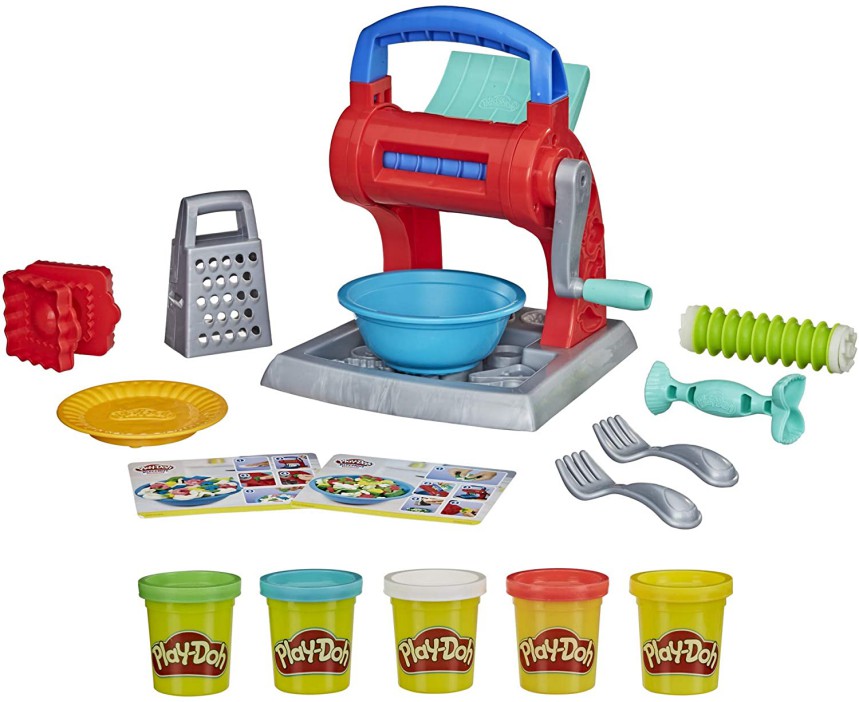 Kids can make their own pasta inspired playdoh dishes or create playdoh ice cream cones with these playsets.

There's also a candy delight set for kids to create playdoh gummi bears and other sweets as well as the less appetising snotty scotty where kids can make snot come out of the toy's head. 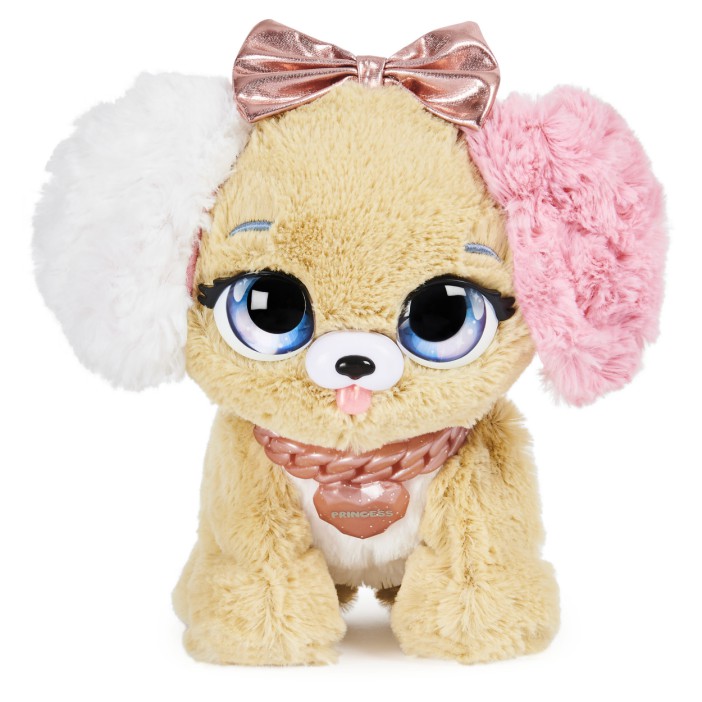 These wide-eyed puppy toys are soft and glittery but are also interactive, making noises, moving around and even responding to your voice.

They cost £55 or £60 depending on which one you get – there are different ones with names like Cocoa or Casey.

Present Pets are another toy Amazon named on its list of top Christmas toys.

The £55 price tag is the same at all the stores we looked at, including The Entertainer, Very, Argos and Smyths. 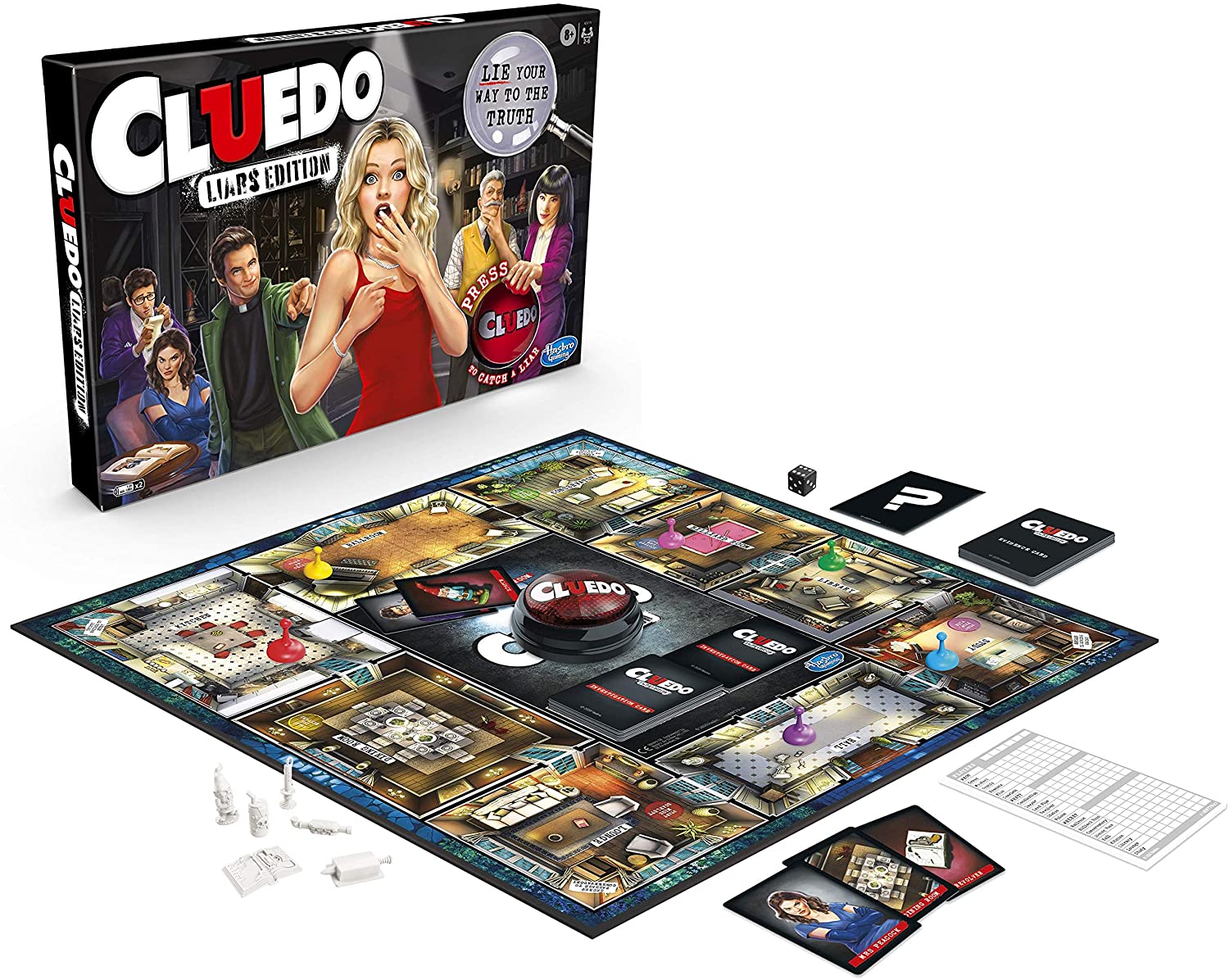 Hamleys have spotted another familiar board game but this comes with a twist too with the addition of true cards and lie cards.

Players read out these cards while the others have to guess if its true or not as they try and solve the mystery.

All the retailers we looked at have the same price of £22. 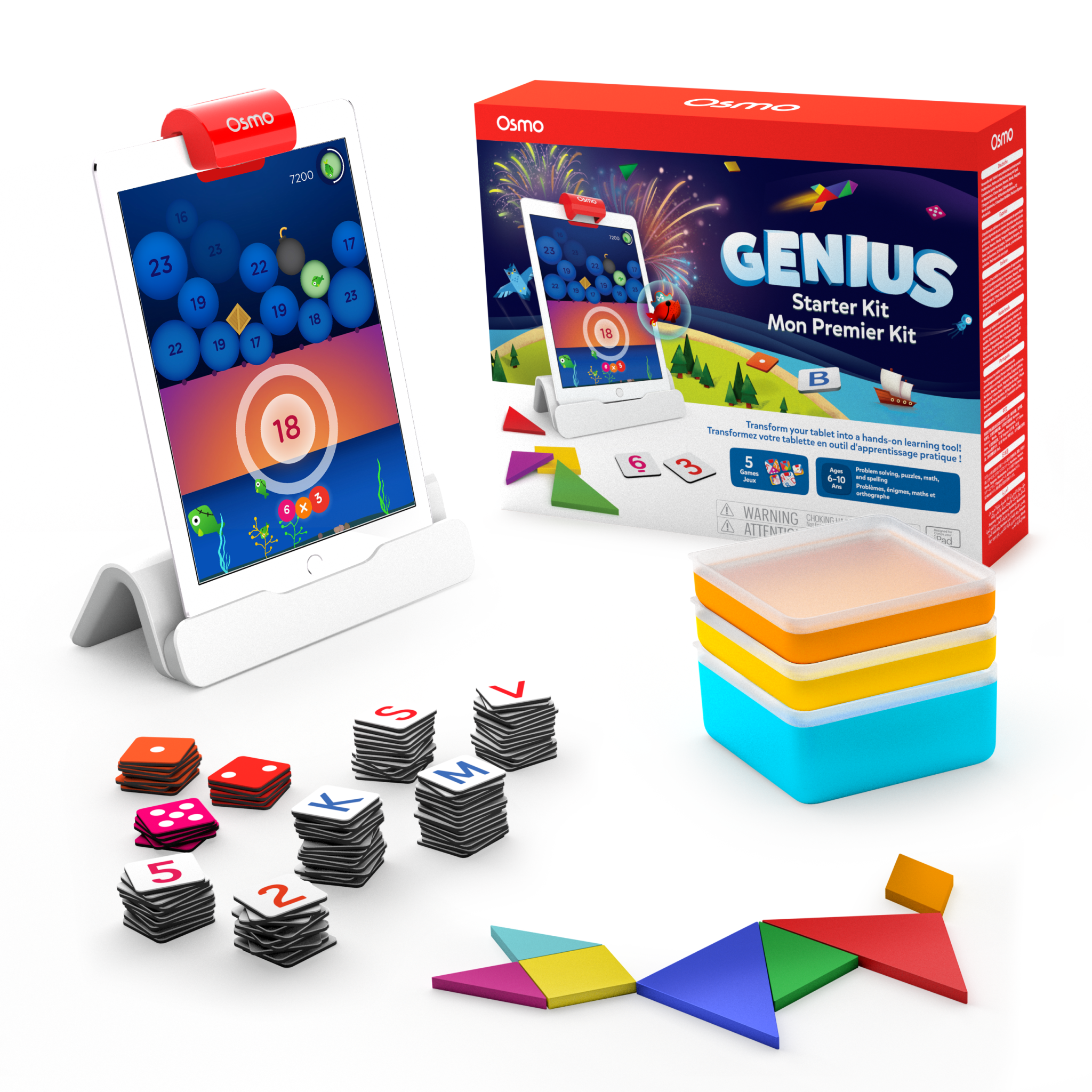 This hi-tech toy works with an iPad or Fire tablet and connects real word toy pieces with what's on the screen.

There are number and word games, puzzles and other learning games, and you don't even need to be connected to wi-fi for it to work. 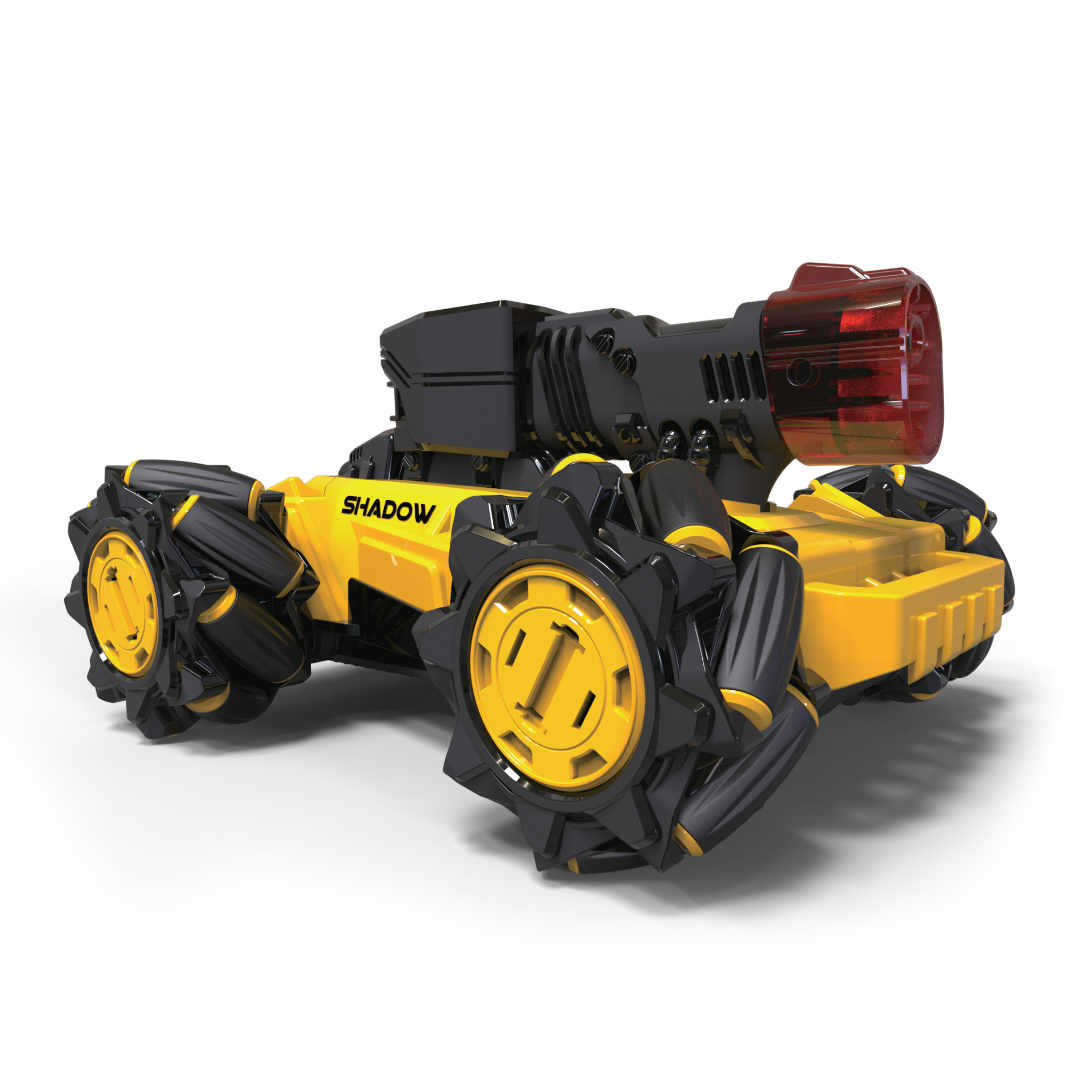 What kid doesn't love toy cars? And these remote control ones come in a pair that can battle each other with lasers. 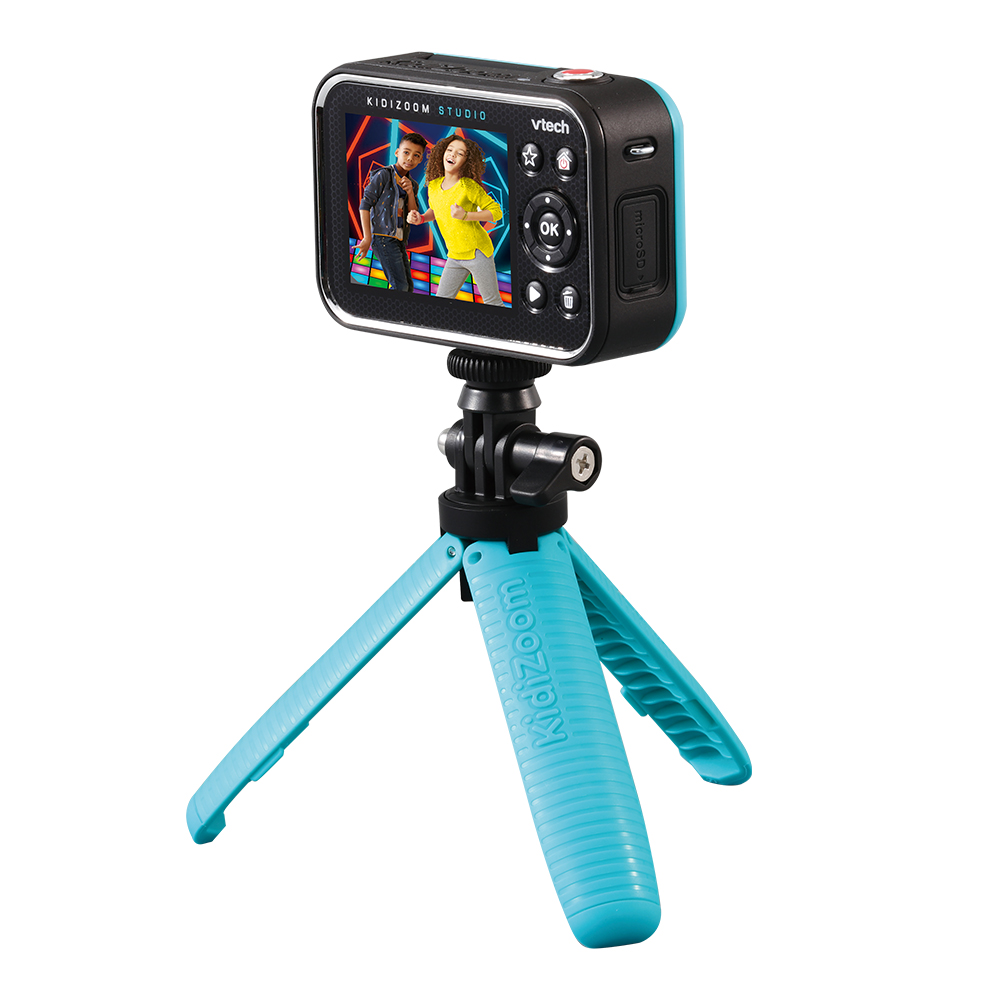 Vtech is a popular brand for kids tech toys and this hd video camera can do selfies and animations and it comes with its own tripod too, perfect for any budding YouTuber. 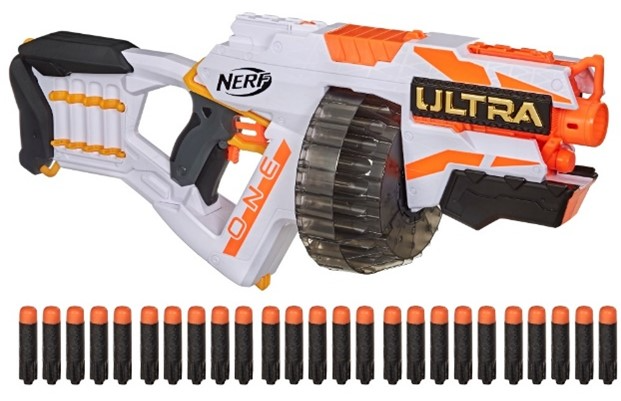 If it's time to get out the big guns for Christmas this literally fits the bill.

The Nerf gun darts of the ultra one blaster fly further than any other – 36 metres in fact – and there are more darts attached for optimum reloading. 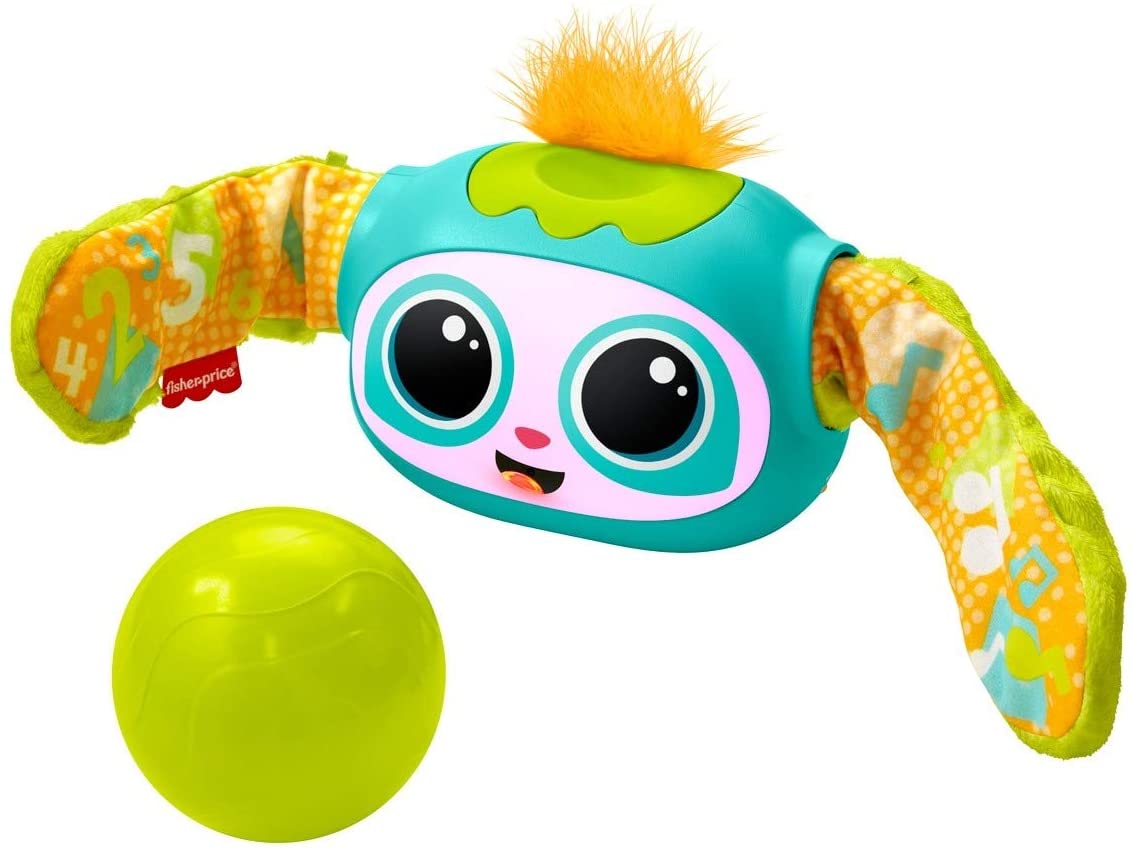 This interactive little soft toy is for the younger members of the family, suitable from 6 months and up.

The cute critter waves its arms and its face lights up while it teaches children the alphabet, numbers and more.

We didn't find this any cheaper at other stores. 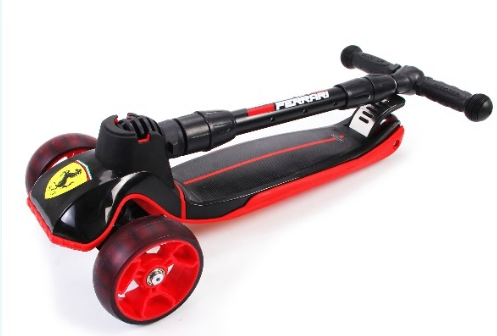 Scooting in the lap of luxury is now possible with this Ferrari branded scooter which folds down and has an adjustable height.

It doesn't come cheap though at £70 and it looks like Hamleys is the only place you can buy this, we couldn't find it at any other toy store. 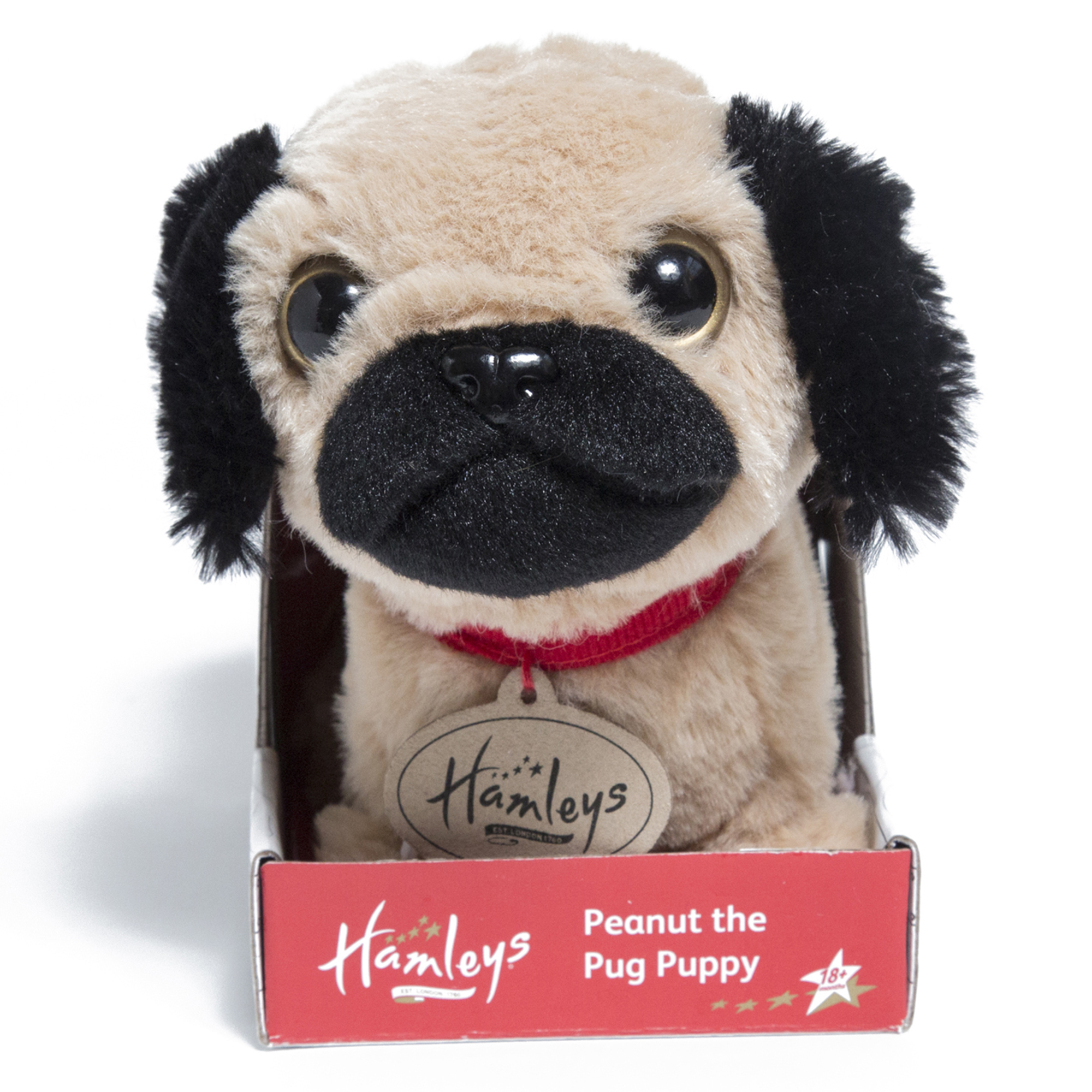 Hamley's own cute cuddly toys make the list and you can choose from Louis the labrador, Harry the husky, Charlie the King Charles or Peanut the pug puppy.

The £9 cuddly toy is available only from Hamleys website or in store. 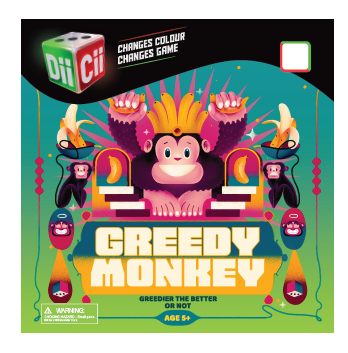 The only new board game to make Hamleys' list, Greedy Monkey is a dice game which can be played by kids aged five and over.

This one is only available to buy from Hamleys and costs £12.

Smyths Toys has launched a huge half price sale with discounts on brands like Lego and Avengers.

Morrisons has launched a massive toy sale with prices slashed up to 50% off.

Amazon has revealed its top 12 must-have toys for Christmas, including a Star Wars Baby Yoda doll and Present Pets.