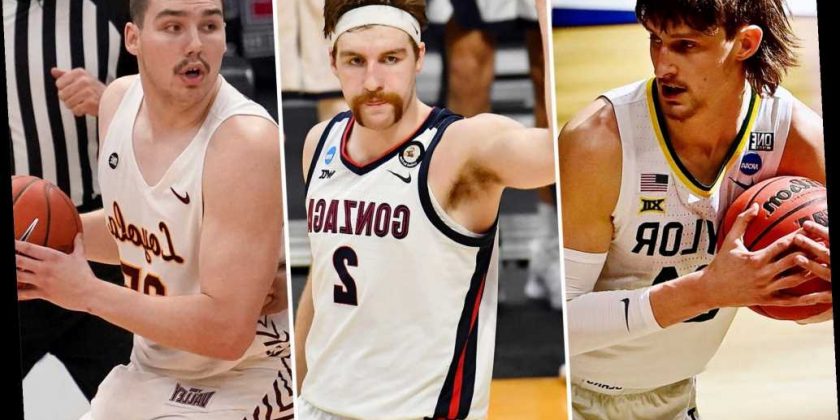 Everything at March Madness has an official NCAA sponsor

Put the trio together and you get very plausible stand-ins for the three guys who used to hang outside of a Jersey 7-Eleven cranking Marlboro Reds in the late ’80s.

But these guys are showing up with the roaring confidence of “Legends of the Fall”-era Brad Pitt.

For example, Timme, 20, arrived at the NCAA tournament with a handlebar mustache so thick, one could safely assume he had a late-day audition for the part of Bull Hurley in a local stage production of the 1987 Sly Stallone joint “Over the Top.”

After No. 1 seed Gonzaga beat Oklahoma to advance to the Sweet Sixteen, Timme, who has been known to stroke his ‘stache after a nasty dunk, was told in a post-game interview that his mother said he had to shave it after they made it that far. “I think after this game, she’ll be OK if I keep it,” quipped the 6-foot-10 sophomore, who had a career high 30 points.

Then there is 22-year-old Krutwig, whose pencil thin, cheesy mustache — called the “krustache” by Loyola faithful — makes him look more like a beefy middle-aged accountant who hangs around Applebee’s instead of the face of two Ramblers Cinderella runs. During Loyola Chicago’s thrilling upset of No. 1 seed Illinois, photos of the 6-foot-9 big man made the rounds on Twitter comparing him to “Super Troopers” standout Rod Farva and a mall cop.

If only there was law enforcement there to arrest Baylor’s Mayer, 22, for impersonating former MLB pitcher Randy Johnson. Mayer and his “mullet bro” sidekick teammate, Jackson Moffatt, have been sporting the dubious style with incredible panache. Mayer’s ‘do is expertly layered and when he’s flying down the court, it catches wind so beautifully, it’s almost like he’s driving an IROC-Z T-top at 70 mph while listening to Ratt with the volume cranked to 10.

Questionable aesthetics aside, these athletes are having fun and commanding the spotlight with their hairy decisions. They’ve made themselves recognizable and as a result, have packed legions of fans on their bandwagon along the way.

Because come tipoff time, who are you rooting for: a clean cut, nondescript bro or the spiritual cousin of Kenny Powers?