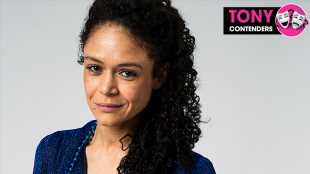 Tony nominee Amber Gray talks to HollywoodLife about the obvious parallels between the political climate & her Broadway hit, ‘Hadestown.’

We don’t know much about the relationship between Donald and Melania Trump, but the 14-time Tony nominated Broadway musical Hadestown offers an alternative look at what their marriage might be like. While examining the complex marriage between Hades and Persephone, and the easy comparisons between Hades and Trump (ie, his number “Why We Build The Wall”), you can’t help but wonder if Melania feels as Persephone does — eager to escape from their home of darkness. “We don’t actually know what’s going on for her everyday,” Tony nominated actress Amber Gray, who plays Persephone, told HollywoodLife in an EXCLUSIVE interview. “We don’t know how much she agrees or she has to do it because she’s scared to. Who knows? I don’t know. But, I do think about her a lot in this role.”

Amber’s Persephone is a strong woman who is relying on her vices to numb the loneliness and pain she feels in the current state of her marriage to Hades. At the same time, Hades (Patrick Page), drunk on power, believes his actions of enslaving workers and building walls, is impressing her, instead of pushing her away. Amber’s raspy, sultry voice, exotic dance moves and old jazz-era costuming make her a bright light on stage — even in the middle of Hell.

HollywoodLife: When you make your entrance, walking down the stairs for the first time, what is going through your mind?

Amber Gray: When Andre introduces me, I love it. Honestly, that moment is a lot about prop survival. There is a reason the bag is set on the piano and not on the top of the stairs because with the bag, it’s too wide and I can’t see the stairs going down the curved staircase. The lace in my dress often gets caught on the wrought iron. It’s just like too much stuff! I’m thinking about my moves in that moment. My right leg hitting a certain step. If I get all the moves right, I’m thinking about spice and sass. I’m thinking about movement and shakes in my body. If I nail all the props right, I can just do it all seamlessly — slip my arm through the bag and immediately start going down the stairs. It’s so fun when I nail it.

HL: Does it take much to get into character?

AG: I’m very outside in person, so once I wear the costume and stare at myself in the mirror for 10 minutes I’m like, “Oh, that’s what it is.” Even after two months of rehearsals sometimes, there’s that final staring in the mirror where you just get it. The ritual of just putting on that outfit every night with jewels help. Something about the choker, in particular. One night I got all the way to stage and didn’t have it, and I ran all the way back up the steps. I can’t do it without the choker now. Just even symbolically, what I think about is having something around your neck and blocking your voice; Persephone having a voice because she fights the whole show. It just like sits right there on my invisible Adam’s apple, and I just need it. Once I have those elements on, and that wig, it does a lot of it for me.

HL: In what ways do you relate to relate to Persephone and find yourself in her that helps you play her?

AG: At the end of the day I think we’re very different. It does come from my body and my voice. The way I shaped how I sing her and how I move as Persephone has all come from the roots of that music. In early iterations, ‘Our Lady’ used to be an entr’acte to Act II, it wasn’t actually part of the plot — it was taken as an out of context cabaret number. I was able to exaggerate the sounds a little more than I would have than if it were part of the plot. Now, it is part of the plot but I still exaggerate certain sounds and that’s gotten more exaggerated over time. I’ve added those colors into other songs but I don’t know if I would have found any of those elements if it hadn’t been for ‘Our Lady’ being an entr’acte in the New York Theater Workshop days. Certain prompts I’ve been given as improvs to do have become choreography in moments, or just me, Amber Gray, like how I want to dance to the music. That’s all become Persephone.

As far as me relating to her, personally. I dig her relationship in that it is old and you have to really wake up every morning and choose love as a verb. Like ‘you again, I’m going to do the work of love and be in this relationship,’ which they haven’t really been doing for awhile at the top of the show when we find them. She and Hades have forgotten why they love each other and you get to see that reunion and that waking up, which I love. I find that very earnest — that three-dimensional, old long-term relationship. I also can relate to someone being in a bad way and doing dumb things to hide from it, to numb themselves or to ignore what’s actually going on. Luckily, I don’t feel the bad relationship or the numbing like in my life in this particular moment, but I have certainly been there throughout my 20s!

HL: Does Persephone miss being ‘above’ or is she not happy with her relationship, or does she note like Hadestown? It’s so complex, but what is she upset about most?

AG: There are so many different parts and it is really complicated. At the end of the day, I think of Hades and Persephone more as a husband and wife than I do like God and goddess or king and queen of the Underworld. I think they earnestly fell in love. They fell in love quite quickly when they were kids. She does love him but having to be with him means being below ground, which she doesn’t like so much. Location wise, she would rather be above ground. She wants the relationship, but she also wants to be above ground. Over time, what Hadestown has become is quite ugly and I think she has started to hate it, which in the beginning, I don’t know that she hated it. She is complicit in something that has gotten out of control and really dark, but I think he’s doing it all just to get her love.

HL: Absolutely. What parallels do you see between Persephone’s and Hermes relationship and Orpheus and Eurydice?

AG: Just how both couples fell in love at first sight. Both couples started as sort of a Romeo & Juliet. I always make the distinction between love as a verb, love as a noun. Both of them fell in love under circumstances of love as a noun — this thing that happened to them — that can only sustain itself for so long. You have to start doing work after awhile and choosing to actually love that person, actively, everyday. To see that kind of pure love, to witness a young couple fall in love in that way again is what wakes Persephone up first. It helps her wake up Eurydice, as well.

HL: I think that’s very prevalent on the rotating stage, when you all come eye to eye with each other.

AG: There used to be a little bit of language to that actually, that has long been cut, but it was essentially saying, this what you could become. I had language advising Eurydice, ‘Don’t go down this path because you’ve got it, sister. You’ve got true love. You don’t need to choose wealth and prosperity of the comfort of Hadestown. You’ve got it and if you’re not careful, you could become bitter like me.’

HL: A lot of people connect the political climate to Hadestown. It’s definitely not hard to, but it was written for this Administration was even a thought. Do you feel a responsibility to play into the political similarities? Or do you try to avoid them?

AG: That element has always been there, but it wasn’t clear for awhile because to be quite frank, at New York Theater Workshop we just didn’t have the budget to afford a chorus, so the principals were the workers as well, which was confusing to people. Now that we have the separate worker’s chorus, I think it’s gorgeous, I think it’s actually the heart of the show now. Yes, there are two parallel love stories, but it’s also totally a political story about somebody trying and waking up the numb masses. They do fail but at least the masses have woken up and the needle is nudged a bit so that maybe the next Orpheus that comes to Hadestown doesn’t turn around.

I love that political message which yes, can look like so many things in different times but in the last two years, since a certain someone got elected, we need that story of hope right now. It is totally parallel to stuff that has happening in our lives at the moment. Why not lean into it? I think it’s really appropriate.

HL: Do you think about the First Lady at all when you’re playing this role?

AG: I totally do. I think of her a lot. We don’t actually know what’s going on for her everyday. We don’t know how much she agrees or she has to do it because she’s scared to. Who knows? I don’t know.

HL: I agree. It helped me empathize with her & realize how little we really know about her situation. Now, why should people see this show?

AG: I think it is some of the best music I’ve ever heard, hands down. When I heard that concept album by Anais Mitchell, it’s an album I’m just very happy to have on in my home all the time. It’s haunting and gorgeous music. To see it in a big old Broadway musical — which it is now, it wasn’t always, but it is now — if you crave a big, flashy Broadway musical, I think you get it with this show. You also get music you’ve never heard on a Broadway stage, which is just really exciting. That alone is reason enough to come. And, again, in this particular culture, in this particular moment, I think the story is very cathartic for most Americans.

HL: Do you have a moment in the show that just fulfills you every night?

AG: There are a lot of them in the show I have to say, which I’m grateful for, it’s not always the case. You can work on a show for five years, I’ve worked on many that long, and the audience just doesn’t love it as much as you do. When those two things align, it’s very special.

There are a few moments when you could hear a pin drop in the house, which is awesome. What I’ll speak to is at the end when Andre wraps it up and says why we just told you this story, and Orpheus is just down on his knees. I’m actually climbing back into the pit to come back up and I’m waiting there while they load the furniture and I’m looking at those two men and you could hear a pin drop in the audience. You can also feel the energy of them leaning forward… That’s a really incredible moment to feel 900 people hold their and breath together. It’s just beautiful.

The Tony Awards will take place this Sunday at Radio City Music Hall, airing live on CBS at 8 PM ET!