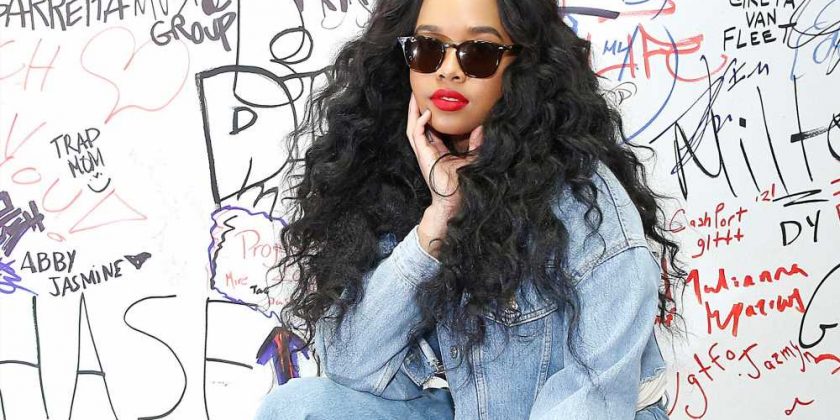 When the alt-R&B artist known as H.E.R. rocked the Grammy stage in February with a custom-made Fender Stratocaster guitar that was as transparent as she is mysterious, she knew that she had to come through for the little girl who dreamed of this moment.

“I saw all the legends in the crowd, people I grew up listening to,” says H.E.R. (pronounced “her”), who will share a soul-sister double bill with Erykah Badu at Barclays Center on Saturday. “I was like, ‘Man, I gotta show them why I deserved to be nominated!’ ”

Not only did the 21-year-old artist born Gabriella Wilson slay the audience with a righteous rendition of her single “Hard Place,” but she won two of the five Grammys for which she was nominated: Best R&B Album (for 2017’s “H.E.R.”) and Best R&B Performance (“Best Part”). It was a triumphant night that turned up visibility for the enigmatic singer and multi-instrumentalist who used to keep her identity a secret by hiding her face in any promotional images.

“The thing about me dropping my music anonymously . . . you had no reason to connect to anything else but my music and my message,” says H.E.R., who still likes to cover her eyes with dark shades. “The music just speaks for itself. But people definitely recognize me more now.”

H.E.R., which stands for “Having Everything Revealed,” adopted the acronym as she was discovering herself while making the transition from girl to young woman. “Now I’m giving women a voice,” says the songstress, who was signed to RCA Records when she was just 14. “Sometimes it’s hard to put into words what you’re feeling. I think my message encourages that honesty and that realness to yourself and who you are.”

Early on, the Vallejo, Calif., native knew she was meant to be a musician. “I really discovered [music] when I was in the womb,” she says with a laugh. “My dad had a cover band. They would rehearse in my living room while my mom was pregnant . . . Music was all around me from the time I came into the world.”

With a Filipina mother and an African-American father, H.E.R. was raised on a diverse mix of musical influences, from Mariah Carey and Journey to James Brown. “My parents have very different tastes,” she says. “They exposed me to so many different things. I represent both sides.”

Another major inspiration was Alicia Keys: In fact, going by Gabi Wilson, she sang “No One” on the “Today” show in 2007. Then, at 12, she performed “Unbreakable” for her idol as Keys was honored at the ASCAP Awards.

I really discovered [music] when I was in the womb.

She’ll get to share the stage with another musical foremother, Badu, this Mother’s Day weekend. “She’s a queen,” says H.E.R. “We’re representing for the women, and she’s a mother, so I think we should celebrate her.”

And with her Bring the Noise Foundation, Inc. — which provides underprivileged students and aspiring musicians with access to instruments and instruction — H.E.R. is hoping to help the next generation of artists.

Or maybe even a new H.E.R., shredding through stereotypes: “Yes, absolutely! That is really the goal — to inspire little girls to do stuff that may not be expected of them.”