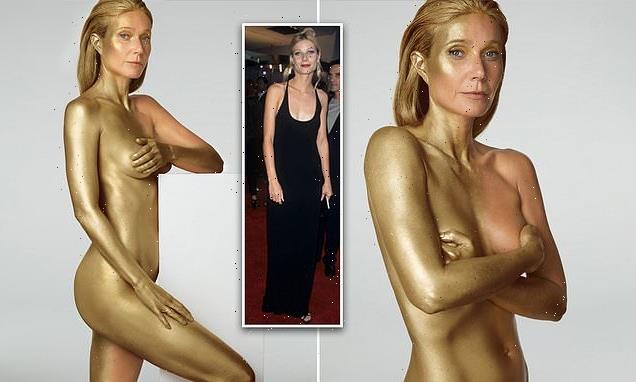 Gwyneth’s gilded birthday suit! Paltrow celebrates turning 50 by posing NAKED in nothing but gold body paint for sultry Goldfinger-inspired shoot that ‘expresses the energy and optimism’ she is feeling

Gwyneth Paltrow has posed nude for a glamorous shoot in celebration of her 50th birthday — putting a whole new spin on what it means to wear your birthday suit.

The Goop founder, who rang in the milestone on September 27, has once again proven that age is just a number by modeling nothing but gold paint, a modern homage to the 1964 James Bond movie Goldfinger.

Both Paltrow and her lifestyle brand shared the stunning images on Instagram on her birthday in honor of her embarking on the next decade of her life.

‘All I know is that they’re painting me gold and that I have to be naked,’ Paltrow said of the sexy birthday shoot, which isn’t for the faint of heart. 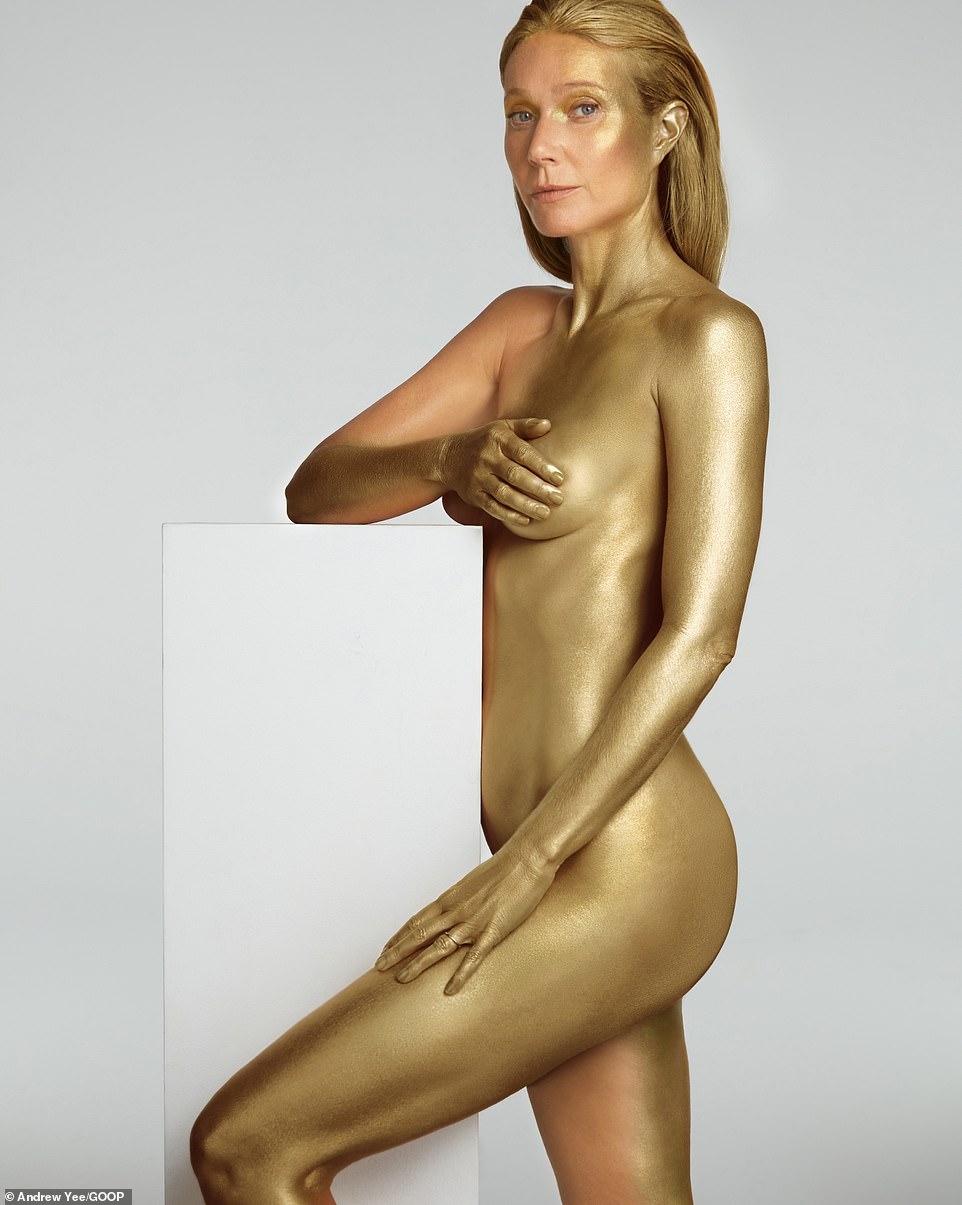 Gwyneth Paltrow rang in her 50th birthday with a glamorous nude shoot after having half of her body painted gold. The stunning images were shared on her birthday on September 27 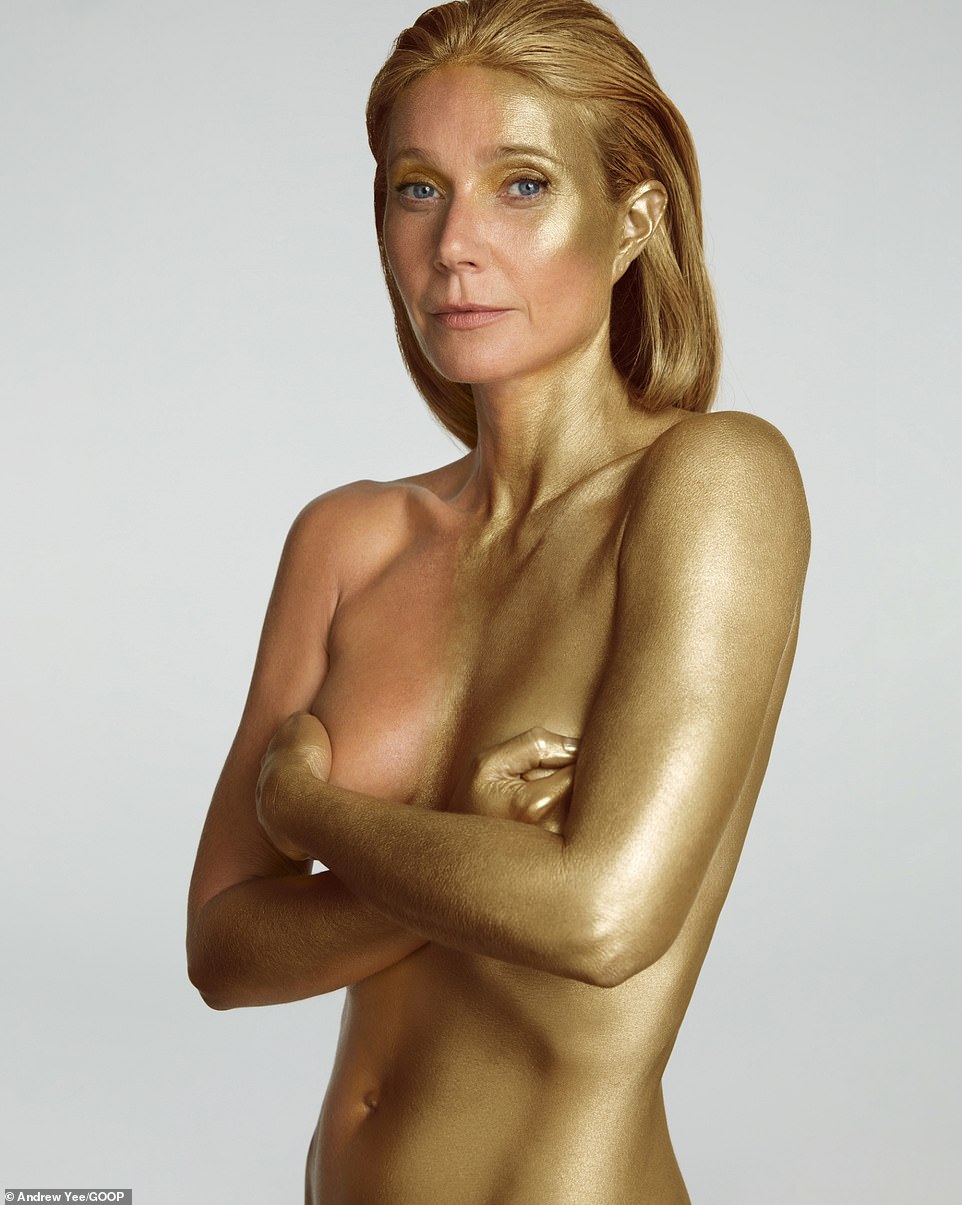 ‘I feel so good turning 50, and this is about expressing that sense of energy and optimism that I’m experiencing,’ she explained 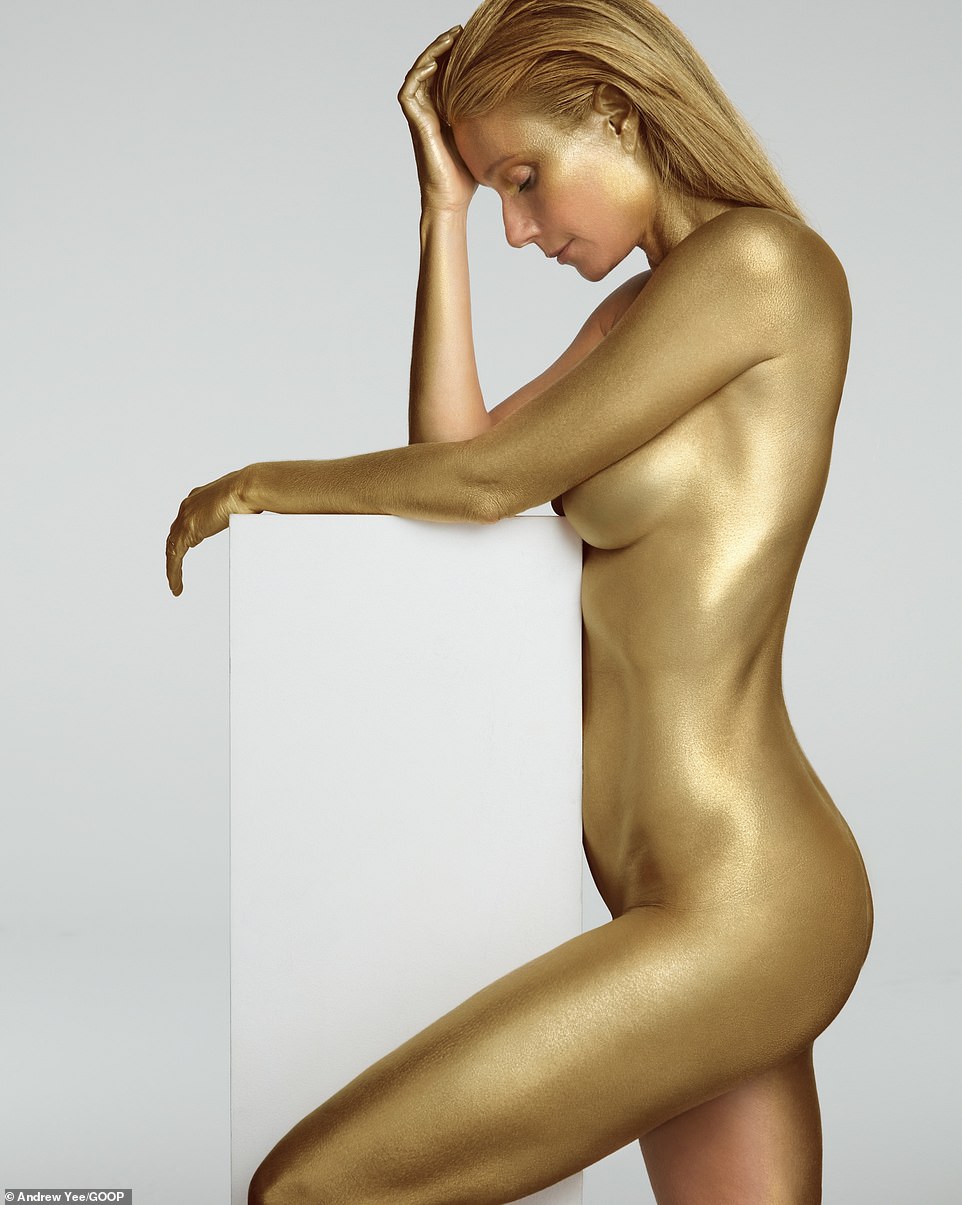 Paltrow strategically posed with hands, arm, and leg covering her chest and nether regions, ensuring the shots wouldn’t get flagged on social media

The Oscar winner had half of her naked body painted gold before stepping in front of the camera. She strategically posed with hands, arms, and legs covering her chest and nether regions, ensuring the shots wouldn’t get flagged on social media.

‘I feel so good turning 50, and this is about expressing that sense of energy and optimism that I’m experiencing,’ she explained. ‘It’s more about the female gaze and just a sense of fun.’

In honor of Paltrow’s milestone birthday, Goop has shared a timeline of her life moments, including when she started acting and launched her lifestyle website.

‘The idea of Goop evolved and grew, and I along with it,’ the birthday girl said.

Paltrow also sat down with her husband, Brad Falchuk, for a podcast episode that was released on her birthday.

Ahead of turning 50, she penned a candid essay about her past and her hopes for her future that was published on Goop last Thursday.

Paltrow reflected on the regrets and mistakes that still keep her up at night, saying that she hopes she has ‘learned from them all.’

‘I have hurt people, never intentionally, but I have done so just the same. I have let people down by not being who they needed me to be. I have betrayed myself to keep the peace,’ she wrote.

‘I have crossed lines, the thoughts of which sometimes rip me from sleep and suspend me into the hollowness of shame for a long, dark night. Most regretfully, and so often, I have not spoken my truth to spare some perceived consequence, that hurting someone will tear us both apart.’

Paltrow admitted that she used to have a hard time standing up for herself and setting boundaries in both her personal life and career because she was afraid of upsetting people.

She had appeared in a number of movies at a young age and won an Academy Award for her breakout performance in Shakespeare in Love in 1999.

The actress also had high-profile romances with actors Ben Affleck and Brad Pitt, whom she broke up with just a few months after they got engaged in 1996.

‘My most lasting mistakes and the mess that comes with them have all stemmed from me not standing fully in my truth and speaking from it, come what may,’ she explained. 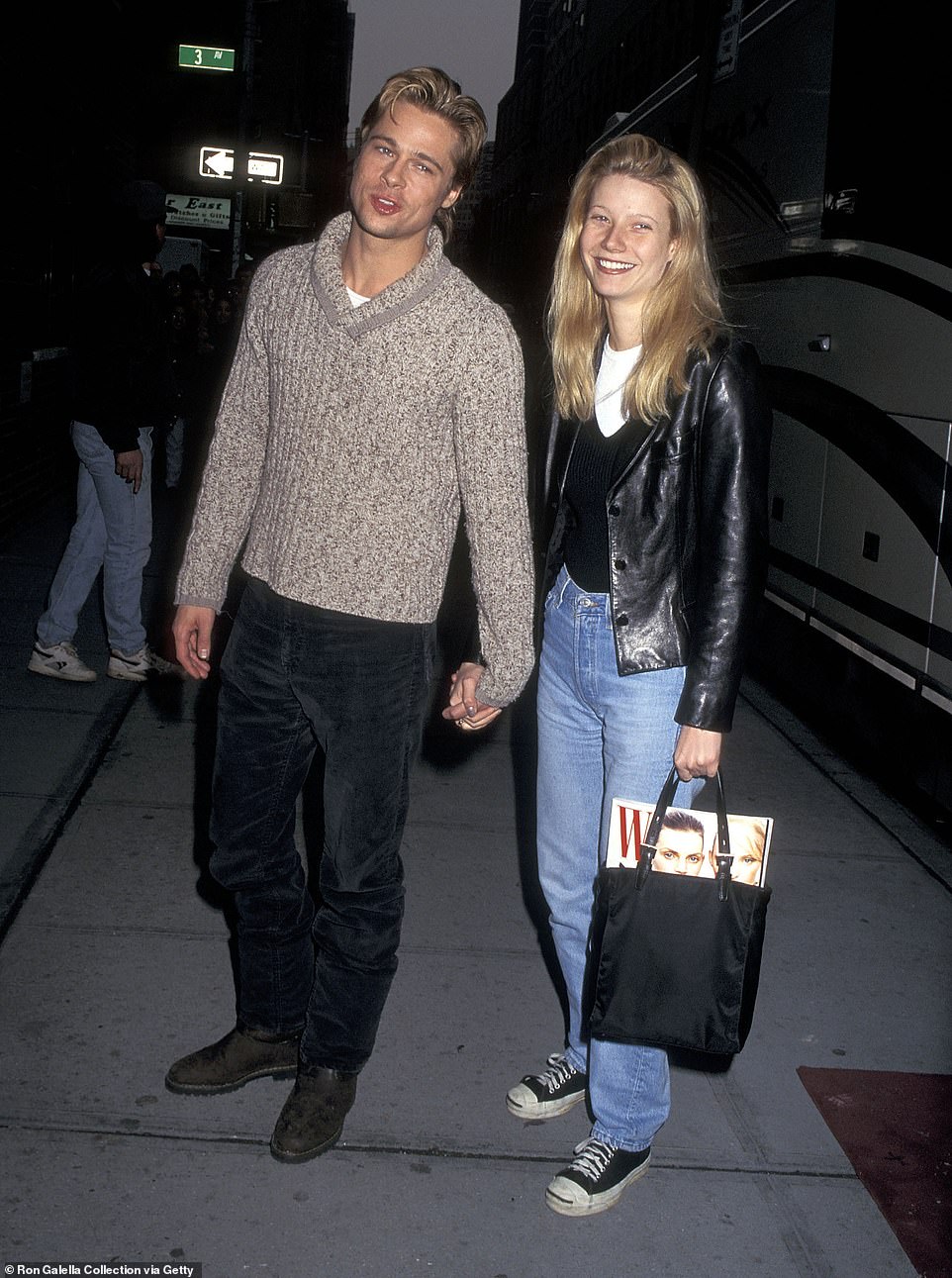 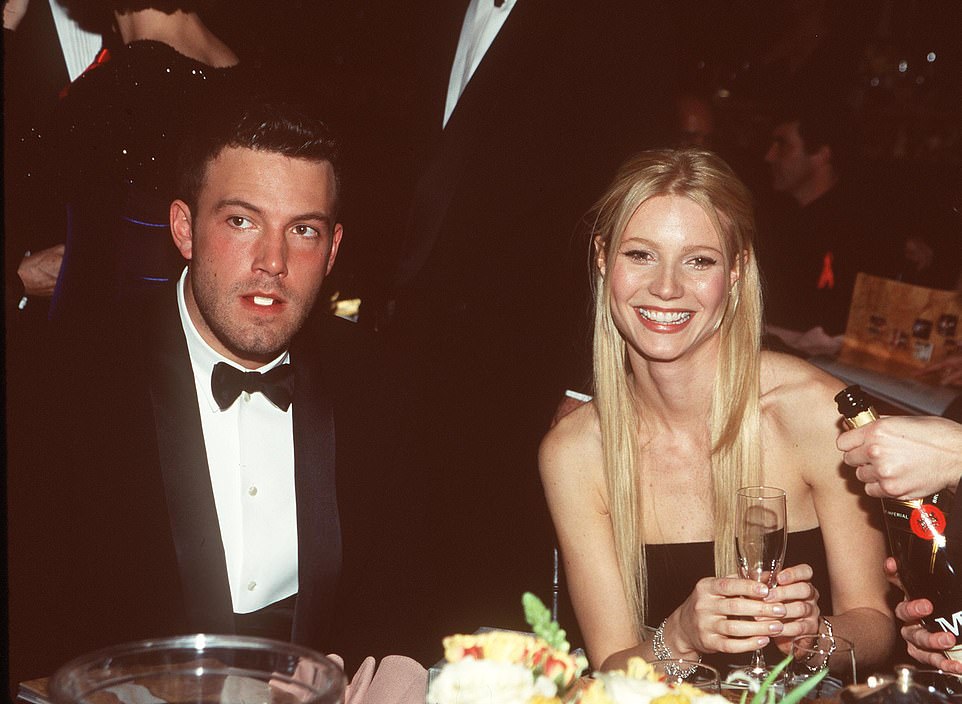 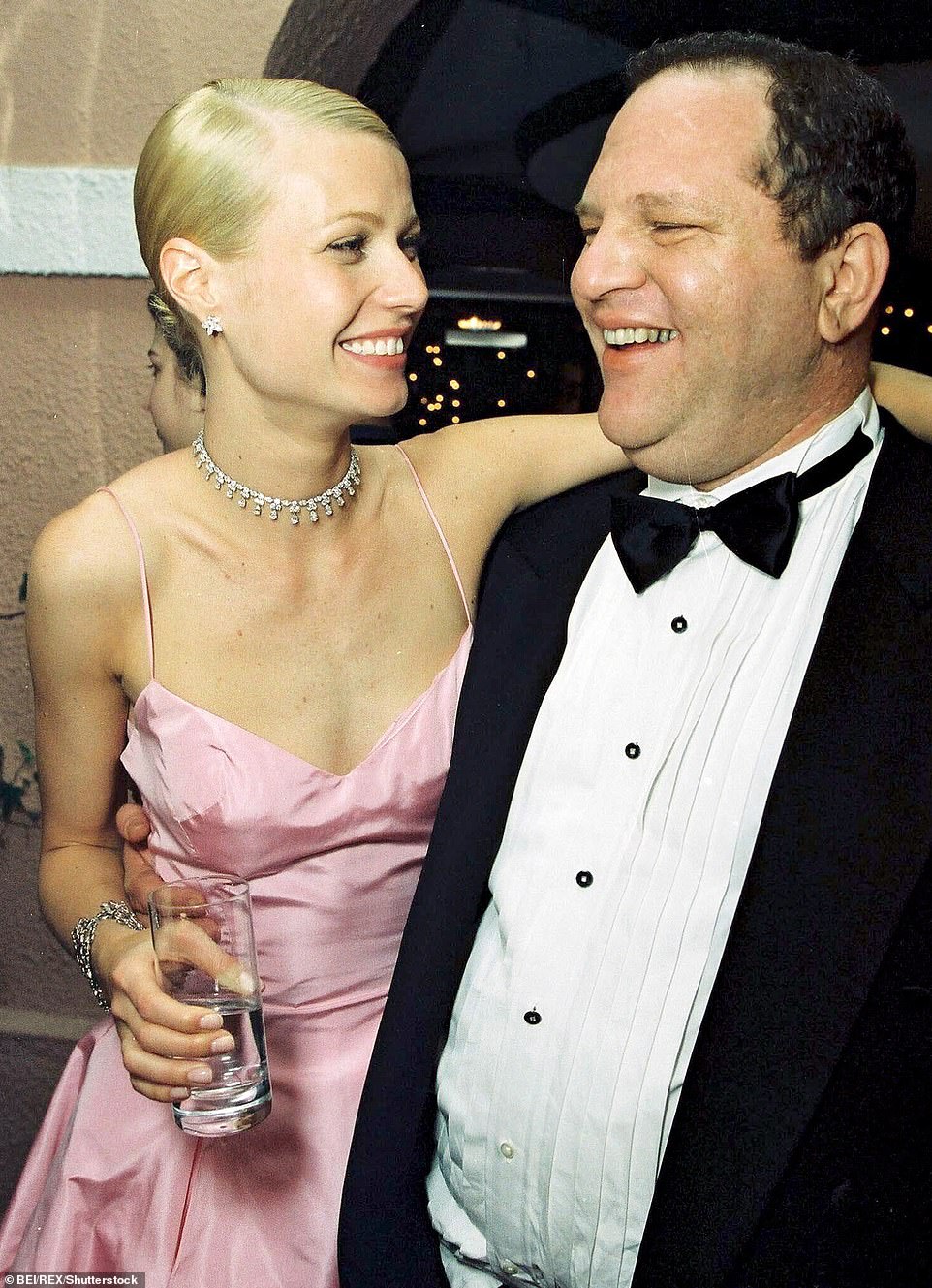 Paltrow, who wrote about learning to set boundaries and call out inappropriate behavior, was instrumental in bringing down convicted sex offender Harvey Weinstein (pictured in 1999)

Paltrow noted that she isn’t sure if she would go back in time to correct her mistakes because they have taught her ‘meaningful’ lessons.

‘If nothing else, they have led me to a path of questioning. Of seeking a better version of myself,’ she wrote. ‘People often ask, “If you could go back to your 21-year-old self and give her some advice…” Well, I would know my boundary and hold on to it more tightly than my life itself.’

The mother of two has given similar advice to her children Apple, 18, and Moses, 16, whom she shares with her ex-husband, Chris Martin. She has encouraged them to trust their instincts and make decisions based on how they feel, especially when it comes to love and sex.

Paltrow was instrumental in bringing down convicted sex offender Harvey Weinstein, who had produced a number of her films, including Shakespeare in Love. 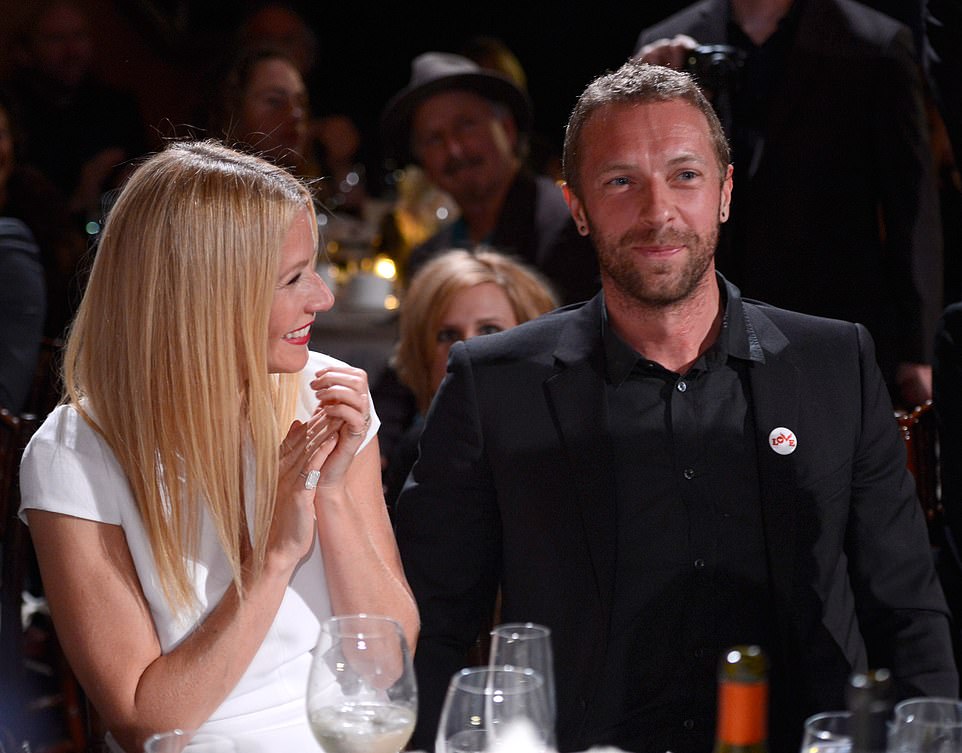 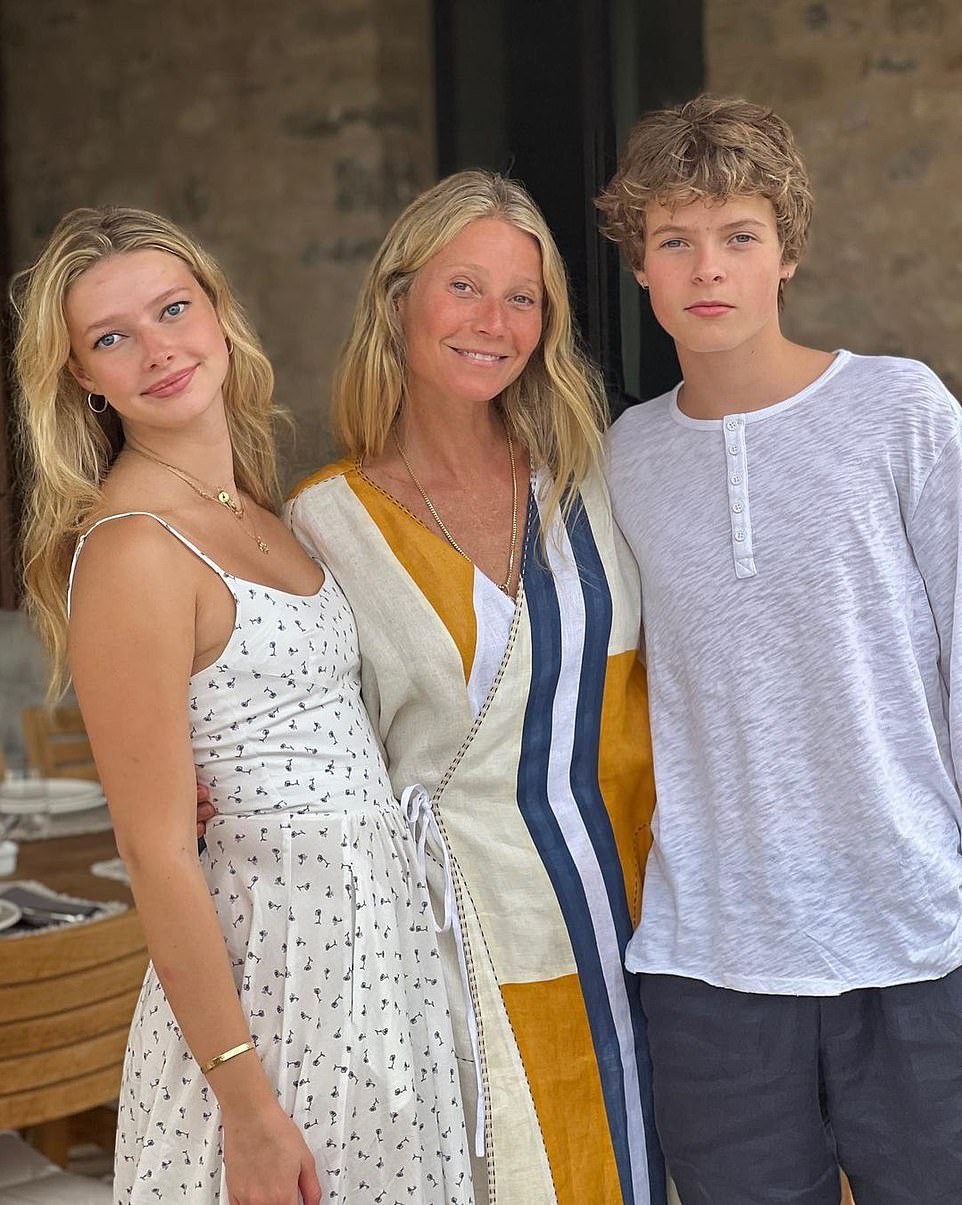 The mom said she’d advise her 21-year-old self to ‘know [her] boundary and hold on to it more tightly than [her] life itself.’ She’s given similar advice to her children Apple, 18, and Moses, 16

The disgraced movie mogul was kicked out of the Academy in 2017 after he was accused of rape and sexual harassment by a slew of actresses.

The lifestyle guru shocked Hollywood when she joined the clamor of voices accusing him of abusing his power over women in the industry.

Paltrow alleged that Weinstein came on to her at the start of filming Emma in 1995, saying he summoned her to his hotel room, put his hands on her, and then asked her for a massage.

‘I had one really uncomfortable, weird experience; then he was never inappropriate with me again in that way,’ she told Variety in 2019.

Paltrow had previously shared that Pitt, her then-boyfriend, had confronted Weinstein for sexually harassing her, saying he threw the Hollywood heavyweight against a wall and said: ‘If you ever make her feel uncomfortable again, I’ll kill you.’ 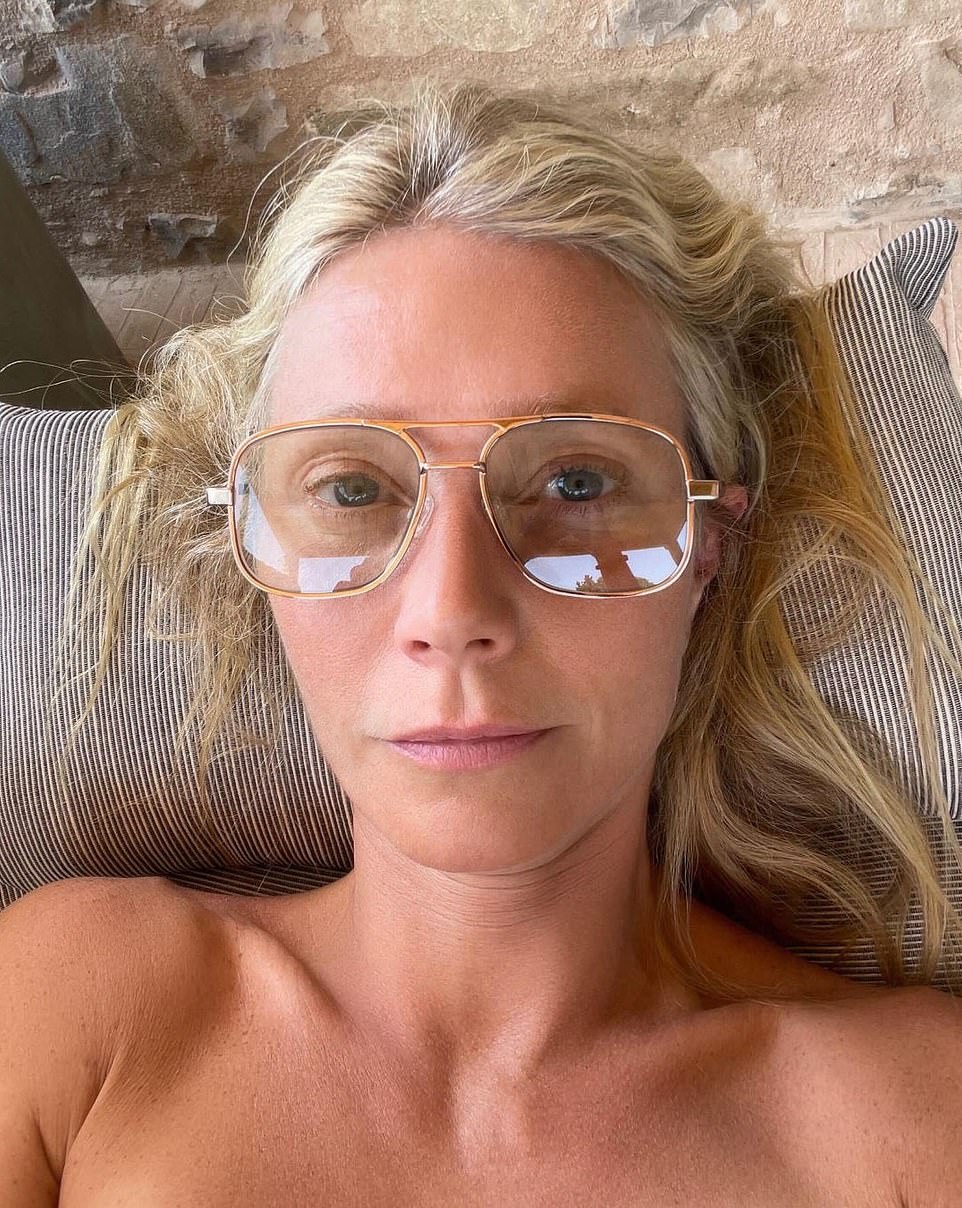 The lifestyle guru also opened up about embracing her aging body, saying she ‘accepts the marks and the loosening skin, the wrinkles’ 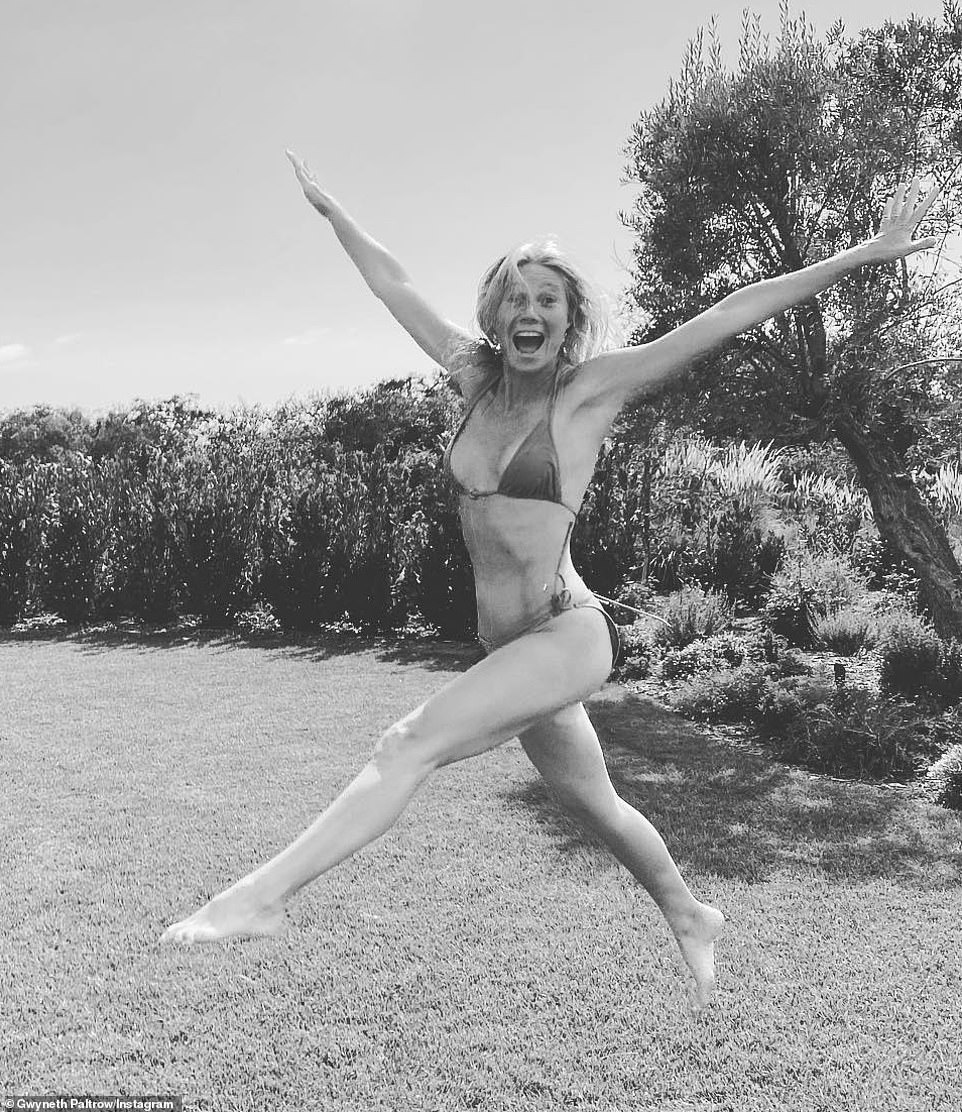 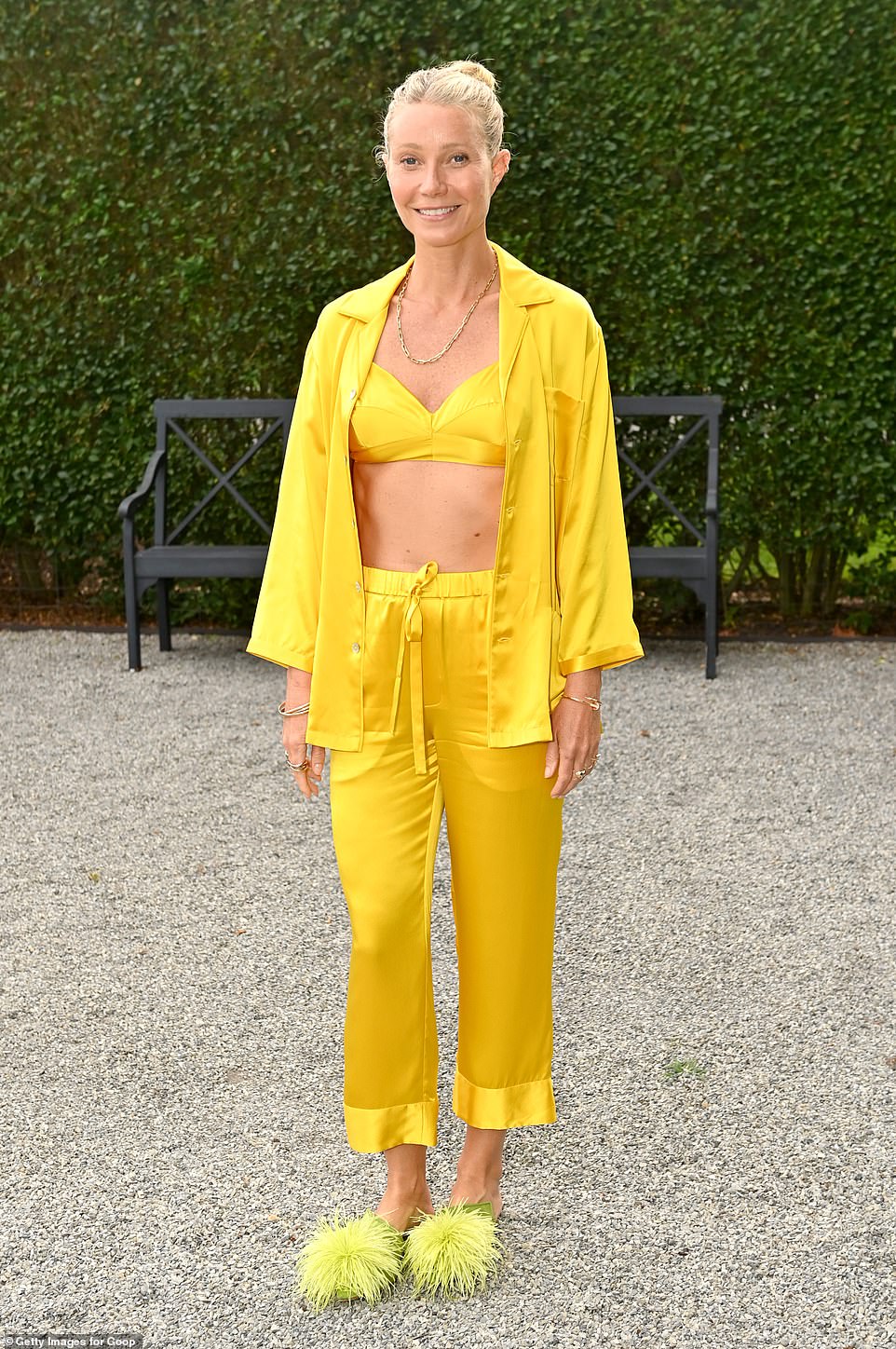 ‘I do what I can to strive for good health and longevity, to stave off weakening muscles and receding bone,’ she said

In 2020, she explained that she lost interest in her acting career at a young age after enduring an abusive working relationship with Weinstein, who is serving 23 years in prison after being convicted of felony sex crimes.

The businesswoman, who now spends most of her days running her Goop brand, wrote in her 50th birthday essay that she wants to take more time for herself in the future and to continue to build on her relationship with her husband.

Paltrow admitted that she is ‘imperfect’ while sharing both her flaws and strengths.

‘I can shut down and turn to ice, I have no patience, I swear at other drivers, I don’t close my closet doors, I lie when I don’t want to hurt feelings,’ she explained. 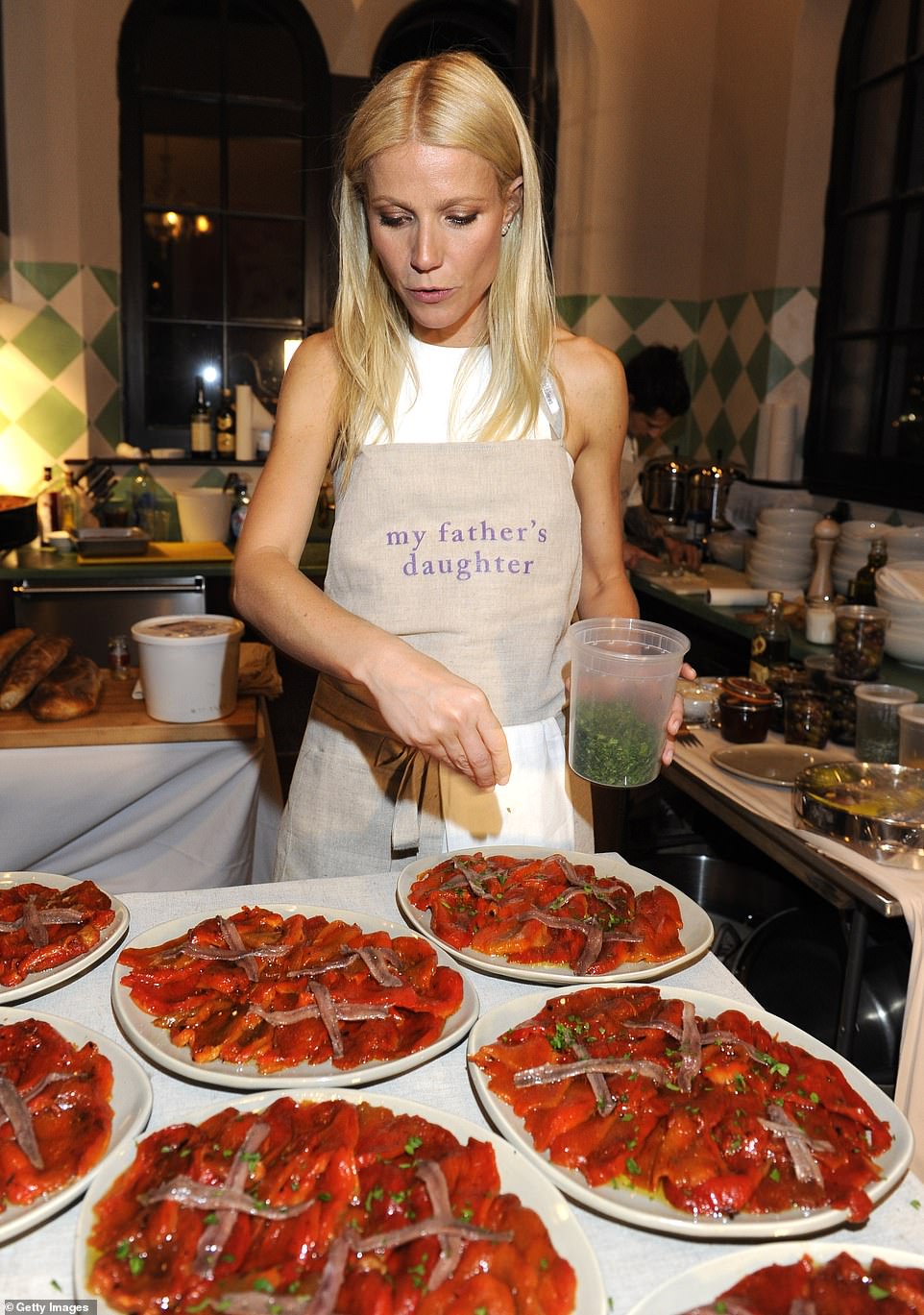 The cookbook author (pictured in 2011) shared that she wants to ‘slow down,’ ‘retreat,’ and ‘cook dinner more’ in the future 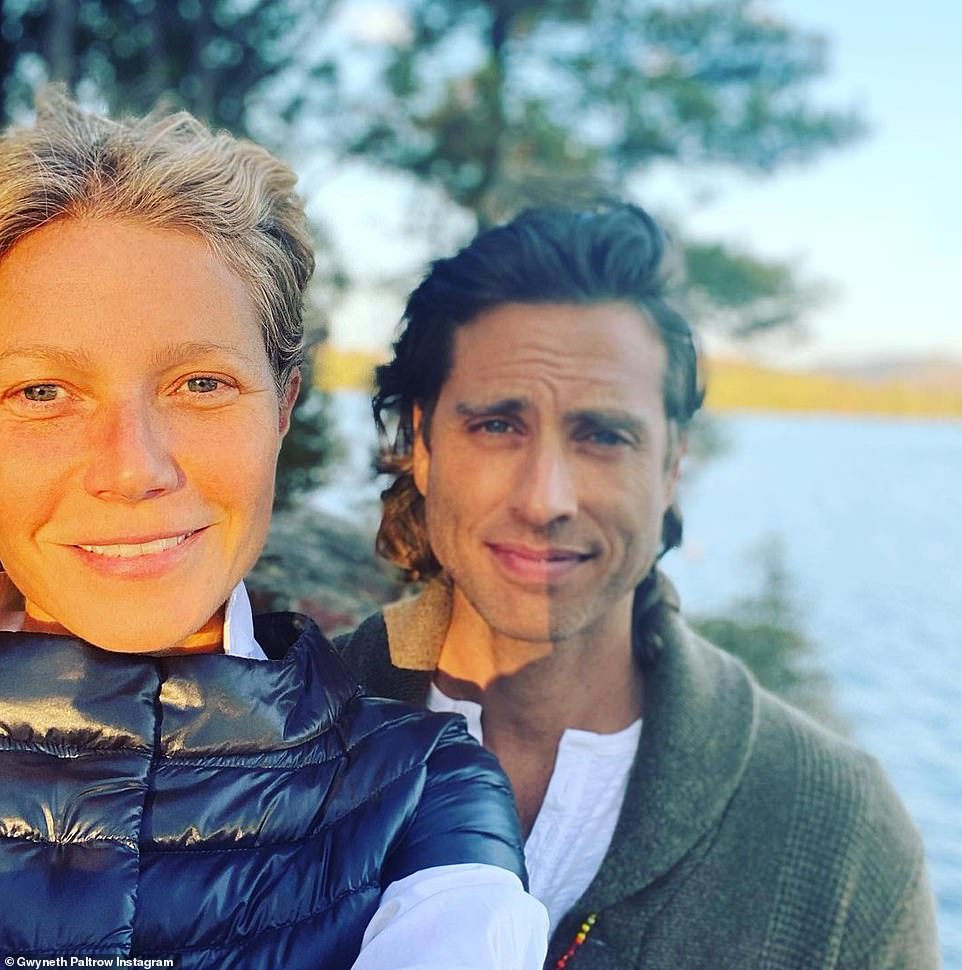 ‘I would like to continue to open the deepest part of myself to my husband [Brad Falchuk], even though it scares me,’ she added

‘I am also generous and funny. I am smart and brave. I am a searcher, and I can bring you along on my quest for meaning. When I love you, you will feel it encompass you through time and space and till the end of the earth. I am all of it.’

She also discussed how she has come to terms with her aging body over the years.

‘My body, a map of the evidence of all the days, is less timeless. A collection of marks and irregularities that dog-ear the chapters. Scarred from oven burns, a finger smashed in a window long ago, the birth of a child. Silver hair and fine lines. The sun has left her celestial fingerprints all over me, as if she soaked a brush in dark-taupe watercolor, flecking it over my skin,’ she wrote.

‘And while I do what I can to strive for good health and longevity, to stave off weakening muscles and receding bone, I have a mantra I insert into those reckless thoughts that try to derail me: I accept. I accept the marks and the loosening skin, the wrinkles. I accept my body and let go of the need to be perfect, look perfect, defy gravity, defy logic, defy humanity. I accept my humanity.’

Paltrow noted that she could remember both of her parents’ 50th birthdays, saying they were dramatically different celebrations.

She recalled how her mom Blythe Danner’s 50th birthday was held at Michael’s restaurant in Los Angeles in February 1993, saying the ‘dinner was delicious’ and ‘the good wine flowed.’

‘Everyone was asked to contribute a poem instead of a typical gift,’ she explained. ‘I remember uproarious laughter, happy tears. I remember my mother full of life and joy at the convergence of the love on display, the deliciousness, and wonderful/heartfelt/brilliant/messy poems.’ 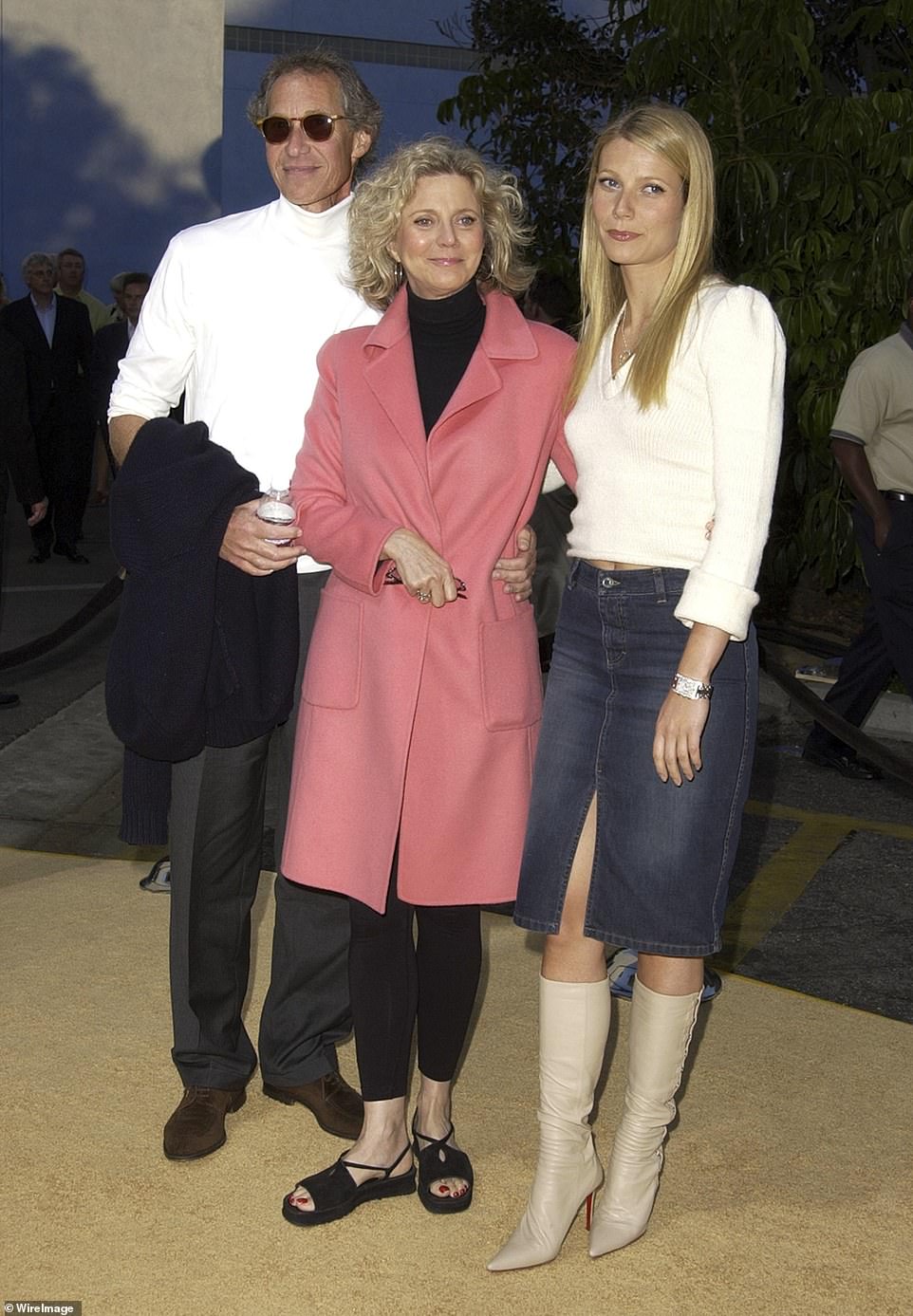 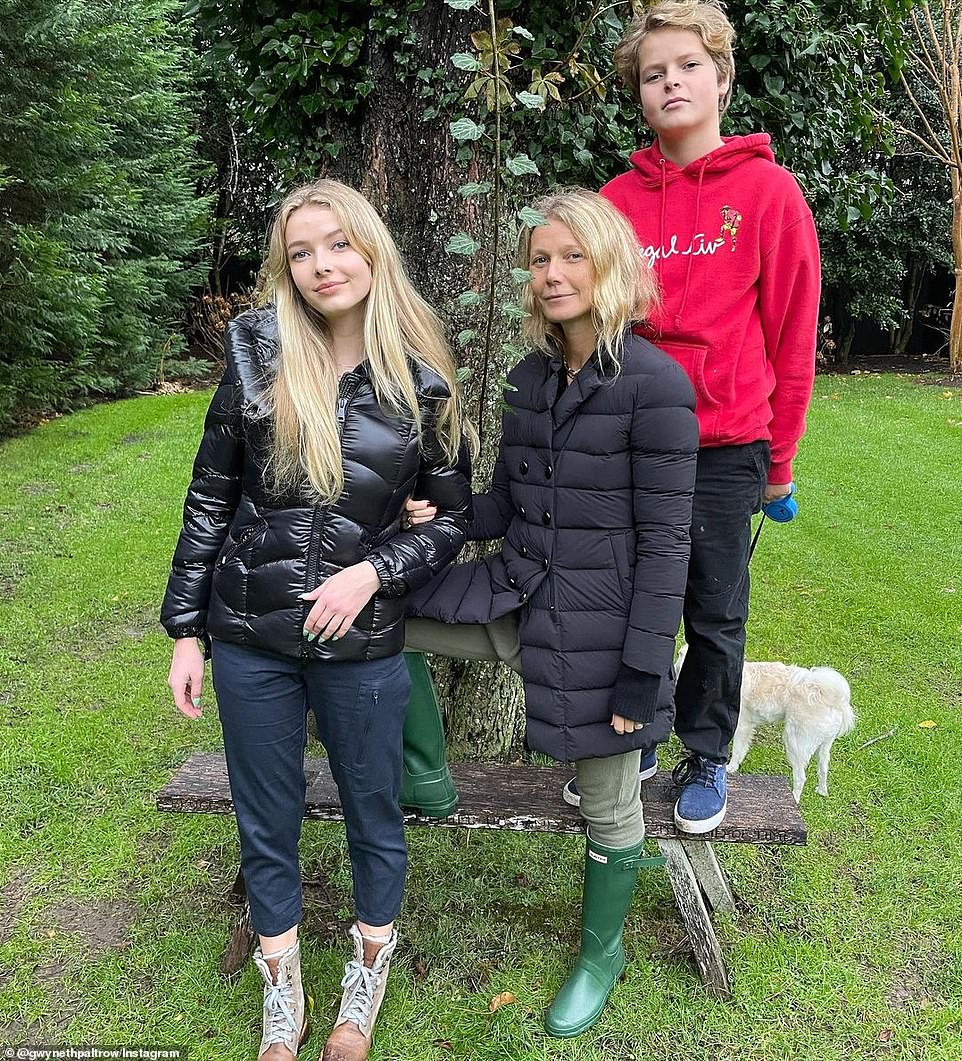 Paltrow wondered if her children will remember her 50th birthday, saying she wants them to know they are ‘the greatest accomplishment of [her] life’

Paltrow said the following November she and her younger brother, Jake Paltrow, traveled to the island of Nevis with their parents to celebrate their dad Bruce Paltrow’s birthday.

In addition to the ‘grey and unseasonably cool’ weather, she could tell her father was going through something, but she couldn’t figure out what.

‘He said he was “fine,” but I found him swallowed by something — he felt bereft, unanchored in some way. It was unsettling,’ she said. ‘He could not embrace the milestone, this marking of the passage of time. Perhaps on some level he knew it would be his last decade.’

Paltrow’s father was 58 when he died from complications of oral cancer and pneumonia in October 2002.

‘I am struck by how, for both of my parents, 50 seemed like a reckoning. For my mother, it was a culmination of the wonderous, the highs, the loves, the art. For my father, a culmination of sorrows,’ she noted.

Paltrow’s memories of her own parents’ birthdays have made her wonder what her teenage daughter and son will take from her 50th birthday celebration.

‘I think of my children, now old enough to remember this “big” birthday of mine into their own adulthoods,’ she said. ‘Perhaps their memory of it will be neither that I was solely elated, nor grieving the things I lost or did not bring to fruition.

‘I hope that they can feel me feel all the things and hold in the complexity of that notion. That they know I am both good through and through, yet sometimes not. That my feelings of regret and my mistakes can act as scaffolding for what I build from now on. That they are the greatest accomplishment of my life.’