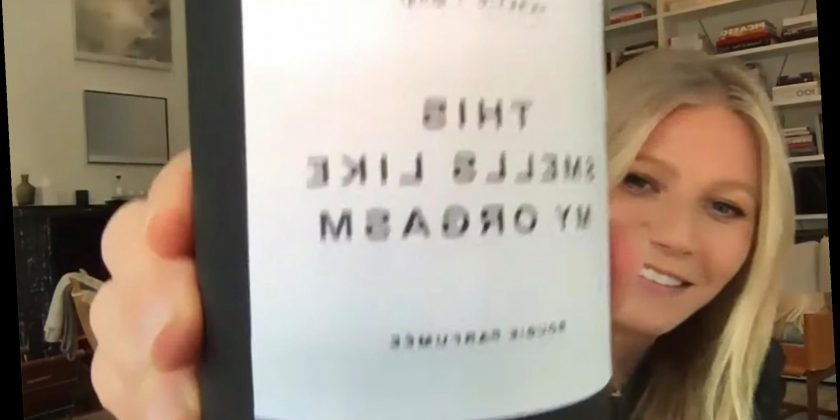 Gwyneth Paltrow just loves the smell of her own scent.

Tuesday on “The Tonight Show Starring Jimmy Fallon,” the Goop queen introduced the latest to her odiferous collection of candles, inspired by Paltrow’s own B.O., called “This Smells Like My Orgasm.”

The 10.5-ounce candle costs $75 and is available on Goop’s website, alongside a colorful description: “A fitting follow-up to that candle — you know the one — this blend is made with tart grapefruit, neroli and ripe cassis berries blended with gunpowder tea and Turkish rose absolutes for a scent that’s sexy, surprising and wildly addictive.”

The candle, a collaboration between Goop and fragrance brand Heretic, is currently available in the US only.

Earlier this year, the 47-year-old actress made headlines with another candle, dubbed “This Smells Like My Vagina.”

As Paltrow waxed on (get it?) about her fragrant climax, her son, Moses, was apparently sitting just outside of the frame before Fallon invited him to chat. The 14-year-old son of Paltrow and her ex, Coldplay frontman Chris Martin, 43, said he was playing piano and guitar in his free time.

The “Iron Man” star told late-night viewers that the original candle idea was supposed to be “punk rock, feminist.” That’s when she suggested that her latest candle, which comes in a box decorated with fireworks, might be just the thing for Fallon’s wife Nancy Juvonen, 53.

“You are crushing it,” Jimmy told her.

The late-night host raved about Goop’s product line during their remote interview via video conference. Fallon, 45, also showed off some of his favorite goods from the Goop store during their chat, such as Dr. Barbara Sturm’s Face Mask. The German beauty mogul was made famous in 2016 for her highly novel yet gruesome cosmetic treatment, the “vampire facial,” involving  — you guessed it — human blood. (Your own, of course!)

“I love what TV stardom has done to you,” said Paltrow, adding that Fallon “barely showered” when they first met.