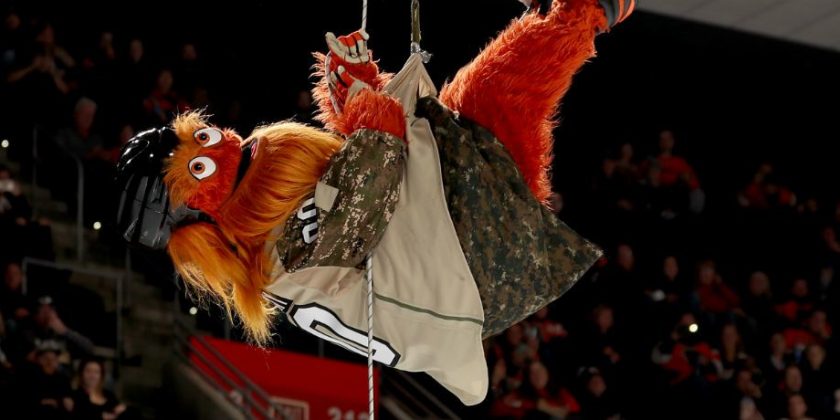 The mascot for the Philadelphia Flyers might not technically be a person, but he put himself forward for the annual honor.

Gritty, the Philadelphia Flyers’ oversized, monstrous, googly-eyed, orange mascot, debuted back in October to mixed reactions. But soon, starting with Gritty’s first appearance at a preseason game, the mascot’s legend has only grown, to realms far beyond hockey.

The mascot has challenged the Pittsburgh Penguins to a fight. John Oliver has devoted multiple segments to Gritty, who has also made other appearances on late night comedy shows. Gritty was filmed by the team playing in the season’s first snow outside the arena, as the mascot’s backstory states that he was discovered living in the Wells Fargo Center during recent renovations and had never before experienced winter weather.

And, in a development that simultaneously makes no sense and all the sense in the world, Gritty has been appropriated as an unofficial mascot by area political leftists, who have taken to drawing Gritty on signs at street protests and sharing online memes featuring Gritty’s picture next to socialist slogans.

In a rather nondescript year for the hockey team he represents, Gritty has been the undoubted breakout star. And now, the big orange guy is pushing for an even bigger honor.

Gritty’s official Twitter account, on Tuesday, put forward the mascot’s candidacy for TIME Magazine’s Person of the Year award. Replying to a tweet from TIME‘s account, which had suggested more traditional candidates such as Donald Trump, Vladimir Putin, Serena Williams, Colin Kaepernick, Nancy Pelosi, and Meghan Markle, Gritty shared a gif of his own face on a TIME cover, with the letters in “TIME” rearranged to spell “it me.”

Does Gritty have a chance? His candidacy might be hurt for one reason, in that the award is called “Person of the Year” and Gritty is not, in fact, a person. Plus, TIME’s editors are mostly based in New York and would seem unlikely to reward a Philadelphia team’s mascot.

However, there is one reason to believe there’s hope for Gritty’s Person of the Year candidacy after all. Years ago, per the Washington Post, someone else made a habit of producing mock TIME magazine covers featuring himself and putting them up all over the place. And that man, President Donald Trump, was named Person of The Year, shortly after his election in 2016. Then again, Gritty’s newfound Antifa allies might not appreciate that comparison.

TIME usually names Person of the Year the first week in December, so expect some news about Gritty’s candidacy in about two weeks.