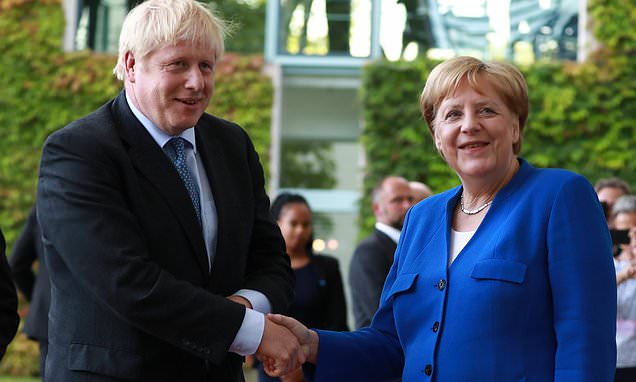 When I heard German Chancellor Angela Merkel had invited Boris Johnson to put forward new proposals to solve the Northern Ireland backstop in the next 30 days, I was delighted.

This might seem a tall order, to produce in just one month a Brexit solution that has eluded others for the past three years.

But in recent months, I have been working closely with international technical experts – practitioners in borders, customs, logistics, transit and so on – to produce precisely that: a workable set of ‘alternative arrangements’ to prevent a hard border between the UK and Ireland.

In June, I presented a report on the issue to a gathering of German Cabinet members and senior German entrepreneurs and industrialists who showed great interest in finding solutions to the backstop.

Unlike the ideological technocrats in Brussels who have refused point blank to consider any way of getting around this seemingly intractable problem, politicians and business folk are more pragmatic – including Chancellor Merkel. She has been indicating her willingness to be more practical on Brexit for some time. 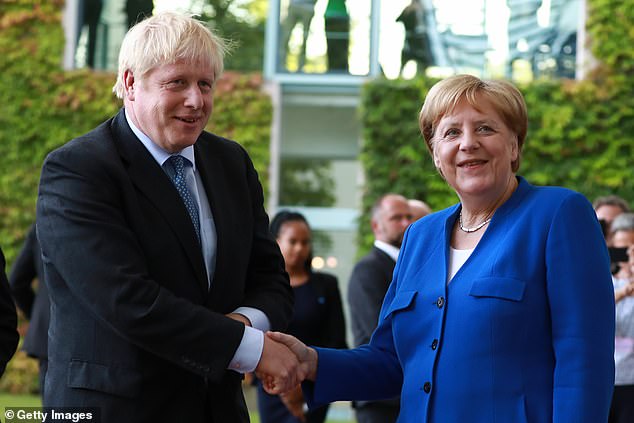 When I heard German Chancellor Angela Merkel had invited Boris Johnson to put forward new proposals to solve the Northern Ireland backstop in the next 30 days, I was delighted

Now it is clear that she is prepared to give serious consideration to well-thought-out and practical ways of getting rid of the backstop so we can achieve four key objectives:

Leave the EU without remaining half-shackled to Brussels for ever; avoid establishing a hard border between Northern Ireland and the Republic of Ireland; protect the Good Friday peace agreement; and safeguard the economies and living standards of those on both sides of the Irish border.

Mrs Merkel’s constructive tone with the Prime Minister was in stark contrast to the intransigent stance of EU President Donald Tusk.

My impression is that the penny has dropped with Mrs Merkel and many of those around her: notably, that whatever the merits of the backstop, it simply isn’t going to pass through the Commons. And without the assent of the Commons, there is, by definition, never going to be a Brexit deal.

The backstop might seem esoteric to some, but Boris Johnson is right when he describes it as anti-democratic and emblematic of wider and more significant issues. 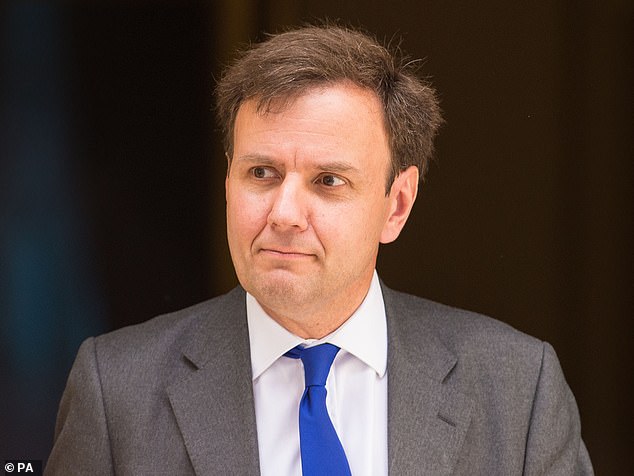 In June, I presented a report on the issue to a gathering of German Cabinet members and senior German entrepreneurs and industrialists who showed great interest in finding solutions to the backstop. Pictured: Greg Hands MP

He put it succinctly in his letter to Mr Tusk – the backstop is ‘anti-democratic and locks the UK, potentially indefinitely, into an international treaty which will bind us into a customs union, provides no sovereign means of exiting unilaterally and affords the people of Northern Ireland no influence over the legislation which applies to them.’

So, if the backstop isn’t going to win the support of MPs, and no longer has the backing of the Government, it is self-evident we must find something that does. This might seem an impossible task with just 72 days to go until Brexit on October 31.

But much of the work has already been done. My Alternative Arrangements Commission went three times to Northern Ireland, twice to Dublin, and to Brussels, Berlin and The Hague to explain the proposals to politicians and opinion-formers.

We recommended a series of administrative and technological measures – all of which are already in place somewhere in the world today. We propose a tiered trusted trader scheme, similar to the one between the US and Canada, the so-called ‘Platinum CSA’ scheme.

These allow firms to cut down on paperwork and avoid routine customs checks at the border.

We also recommended food and animal checks away from the border, and if the regimes on plant and animal regulations diverge, mobile units to carry out sanitary and phytosanitary checks far from the sensitive frontier.

Our proposals also included special ‘enhanced economic zones’ straddling the border between Londonderry and Donegal and possibly Newry and Dundalk, with tax breaks and a free trade zone to avoid duties.

Our Commission concluded that alternative arrangements are the way to break the Brexit deadlock.

It is not realistic to believe they can all be up and running by October 31 but that is no reason to be discouraged. Many of the measures can be brought in quite quickly.

Some like the trusted trader scheme might take 12 to 15 months. Others could take a maximum of two to three years.

So, there will still need to be some kind of transition period. Of course, more work needs to be done – and fast. But thankfully, Mrs Merkel is among the growing number who are open-minded on this.

It doesn’t mean the EU is yet convinced. It just needs both sides to grasp the opportunity. With that in mind, I am hosting a conference next month near the Irish border for politicians from North and South to study our plans.

It won’t be easy, but as Boris Johnson told a smiling Mrs Merkel: ‘Wir schaffen das’ – we can do it.