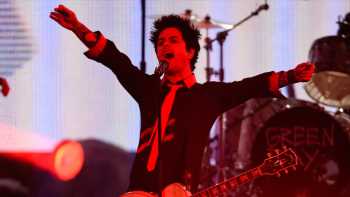 Green Day’s appearance at iHeart is notable for another reason: At the end of the band’s set at the festival in 2012, frontman Billie Joe Armstrong abruptly smashed his guitar and yelled “I’m not f–king Justin Bieber!” He said at the time he was protesting that his set was cut short by organizers, but shortly afterward underwent outpatient rehab treatment for alcohol and prescription drug abuse. The timing of the incident was disastrous for the band, as it was about to release the first in a series of three albums in the final months of the year, which they’d planned to support with a tour.

“I’m a blackout drinker. That’s basically what happened [that night],” Armstrong told Rolling Stone the following year. “I started combining [prescription pills] to a point where I didn’t know what I was taking during the day and what I was taking at night. It was just this routine. My backpack sounded like a giant baby rattle.”

The group soon returned to full strength, releasing its “Revolution Radio” album in 2016. It has a new album scheduled for release early next year.