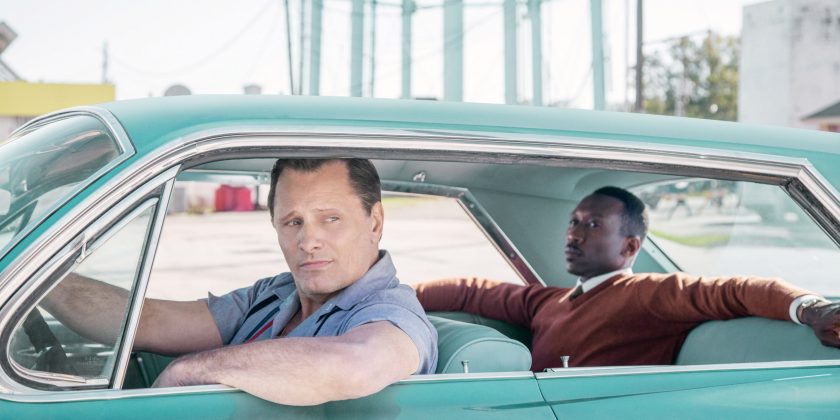 For audiences needing a warm break from cold Oscar bait like “First Man,” try “Green Book,” a film that leaves you feeling good instead of like a trauma victim.

The lighthearted drama, about a road trip by two men — one white, one black — is unflinchingly optimistic.

The movie, set in 1962, is based on the true story of two New Yorkers. Tony Lip (Viggo Mortensen) is a jovial bouncer at the old Copacabana, where he’s famed for his ability to squash fights. Don Shirley (Mahershala Ali), a black pianist, knew Lip’s reputation, and asked him to leave his wife (Linda Cardellini) and kids behind to be his driver on a two-month-long tour of America.

Lip is fine behind the wheel — he once did a stint as a garbage man — but what’s more useful to his passenger is his talent for ending conflicts with his fists. Even for an accomplished entertainer, cities such as Birmingham, Ala., and Macon, Ga., were perilous during the Jim Crow era of the early ’60s. The book of the title is “The Negro Motorist Green-Book,” which helped black travelers find hospitable accommodations.

A partnership is born: Shirley tickles the keys while Lip pummels the thugs. And what would a road trip be without some changed perspectives along the way?

To be sure, Shirley was unusual for his time. Back then, it was a rare black man who lived in a palatial apartment above Carnegie Hall, with furnishings Marie Antoinette would have envied. His friends called him “Dr. Shirley” because he had received two honorary degrees. But he still could have learned to loosen up a bit. The excellent Ali (“Moonlight”) plays Shirley like Spock — with a stiff spine and courteous chill.

Not so posh was Lip, a gregarious, funny Italian-American from The Bronx who scraped by to feed his family. The real Lip was so identifiably Italian-American, he later became an actor who appeared in “The Godfather,” “Goodfellas” and “The Sopranos.”

The loving screenplay of “Green Book” — written by Lip’s son, Nick Vallelonga, with Brian Hayes Currie and director Peter Farrelly — doesn’t shy away from Lip’s lack of book smarts or his casual racism. Slurs are a regular part of his vocabulary, and, for all his kindness toward Shirley, Lip had a long way to go when it came to tolerance.

Mortensen is almost unrecognizable in the role. To become the physically imposing Lip, a big eater, the normally slim “Lord of the Rings” star acquired some middle girth — and a solid Bronx accent. He finally makes you forget about his “Rings” role as Aragorn.

The ups and downs of their journey are told through terrain. They start out in Pittsburgh and Cleveland, in nice hotel rooms and at glamorous parties. It’s when they reach Louisville, Ky., that the first “Colored Only” motel sign appears, and the attitudes turn hateful — toward Italians, too. Wisely, none of their hardship ever becomes scream-at-the-sky agonizing. Rather, the characters endure everyday moments of oppression.

“Green Book” could be accused of being clichéd if the story wasn’t also true. And the tone leans sentimental, if not quite sugary. But the actors’ honest chemistry takes Farrelly’s movie to the next level. This small tale of American goodness deserves your full attention.