With Halloween just around the corner, the rich and famous are already getting into the spirit of the season – royalty included.

Princess Olympia of Greece, 22, led the regal partying over the weekend donning not one but two rather racy outfits for her festive celebrations.

Her cousin Princess Talita Von Furstenberg, 19, was also in the seasonal spirit donning a striking bat headpiece for a party with her boyfriend Rocco Brignone, who was dressed like a vampire. 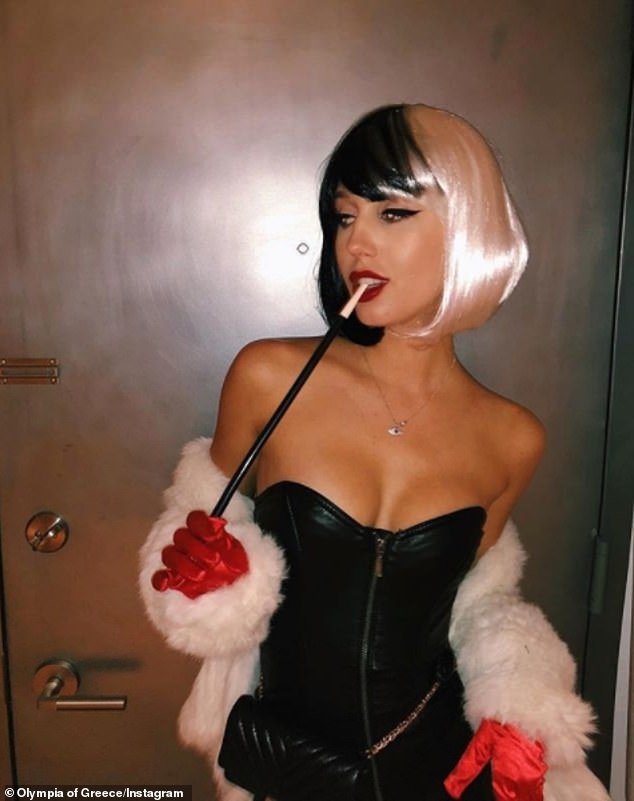 The Greek royals have been celebrating Halloween in style with lavish parties in New York. Princess Olympia of Greece, 22, donned a sultry Cruelle de Vil Costume, complete with a leather bustier, fur coat and black and white wig (pictured)

The Greek royals have no official remit after the monarchy was deposed and scrapped in 1973, but still remain impeccably connected with other regal families throughout Europe.

Olympia, a New York-based student, wore a skimpy Cruella de Vil costume, complete with a leather bustier, white fur coat and black and white wig for her first Halloween party of the season.

She posted a picture of herself wearing the risque outfit to Instagram, in which she posed with an old fashioned cigarette holder in her mouth.

For her second costume she sported a leopard print leotard and matching fur coat with fishnet tights. 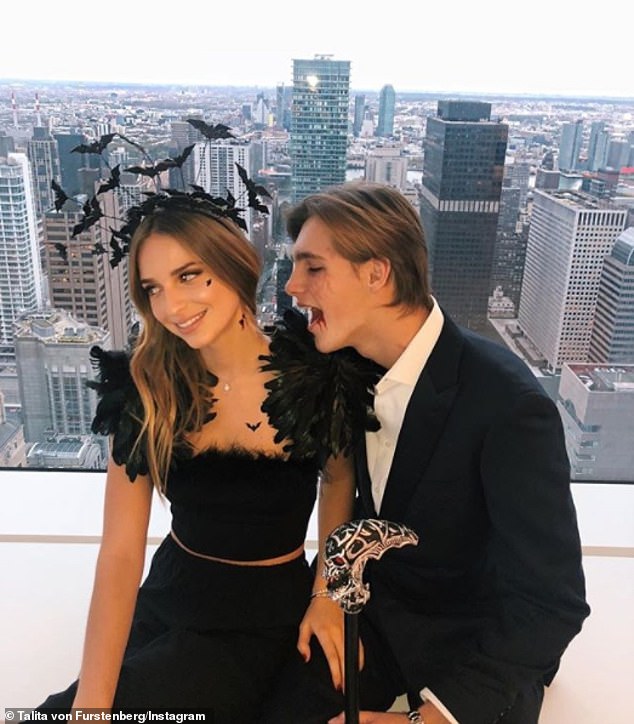 Princess Talita von Furstenberg, 19, (left) wore a more demure costume in a black gown and feathered bolero with a bat headpiece. She posed with her boyfriend Rocco Brignone (right), who was dressed as a vampire 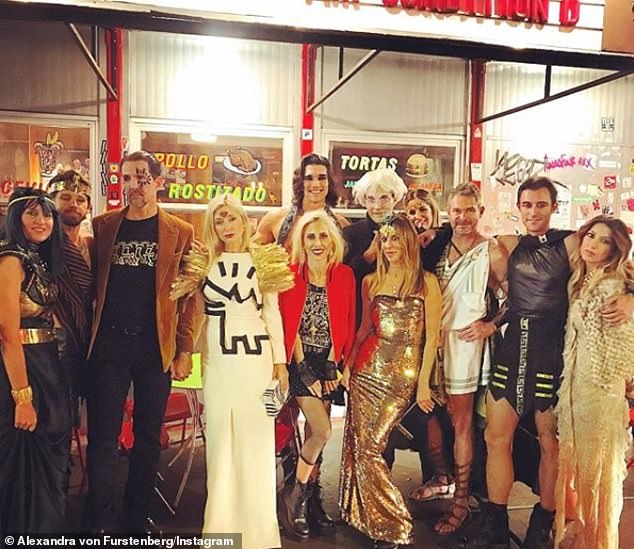 Meanwhile, her mother Marie Chantal and father Pavlos wore their normal clothes with a Halloween twist.

In a group shot by businessman Bronson van Wyck, Maria Chantal wears a stylish white gown a geometric print and a gold bolero, with fake blood dotted on her forehead. 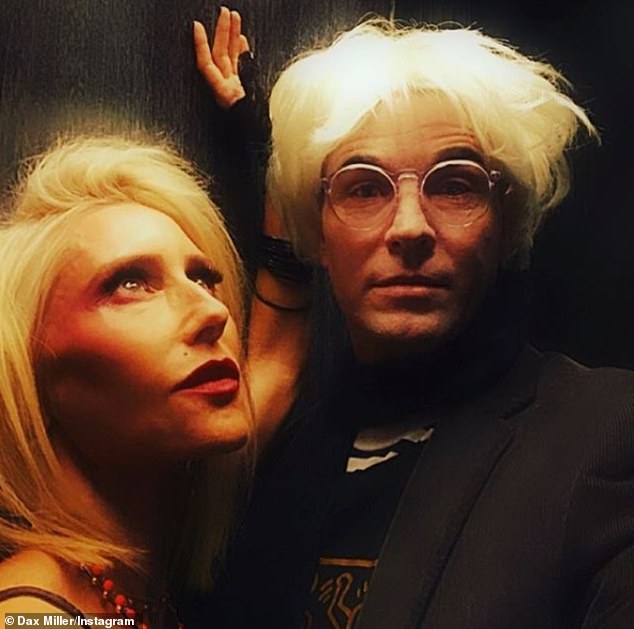 Dressed in an eighties style costume, Alexandra (left) was photographed by her husband Dax Miller (right), who was dressed as Andy Warhol for the same party 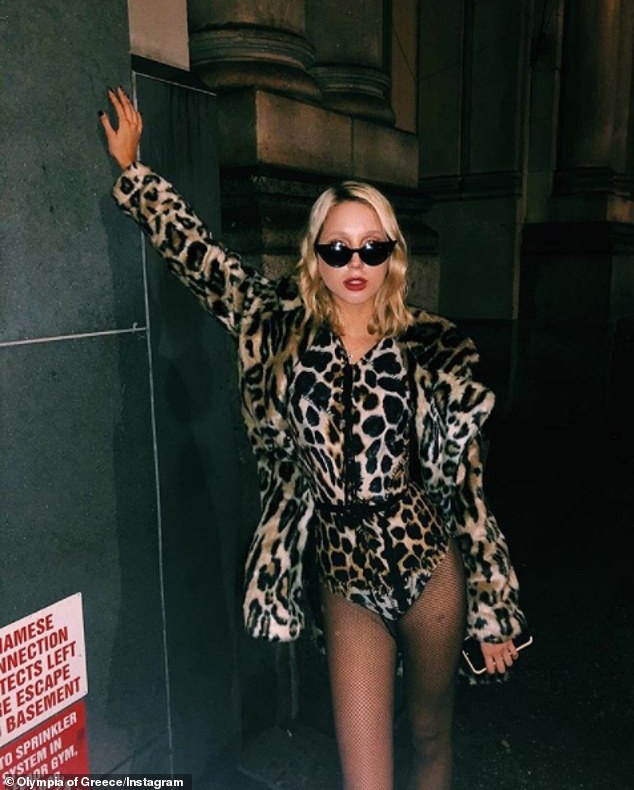 Olympia later posted a picture of herself in a second costume (pictured), which cosisted of a leopard print leotard with a matching fur coat, fishnet tights and sunglasses

To her left is Pavlos in a brown blazer, black band t-shirt and matching jeans, which he wore with facepaint around his eye, apparently attempting a Clockwork Orange theme.

Alexandra’s husband Dax Miller was dressed up like Andy Warhol and posed for a snap with his wife. 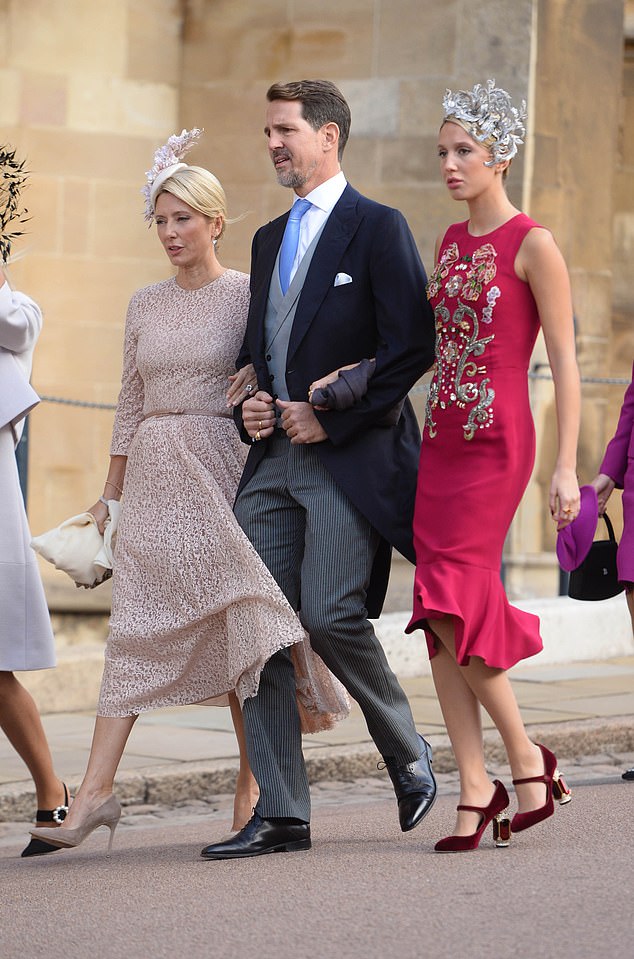 The Greek royals are impeccably connected with other regal families throughout Europe, despite being scrapped in 1973. Pictured left to right: Marie-Chantal, Prince Pavlov and Olympia at Princess Eugenie’s wedding to Jack Brooksbank in Windsor Castle earlier this month

Talita, who is the granddaughter of Prince Egon von Furstenberg ofand his first wife, international fashion designer Diane von Furstenberg, wore a fascinator that made it seem that bats were swarming around her head.

She posted a picture of herself in front of the New York skyline alongside boyfriend Rocco, who looked sharp in a black suit with fake blood around his mouth for his vampire costume.

Talita captioned the post: ‘Last night a vampire bit me.’