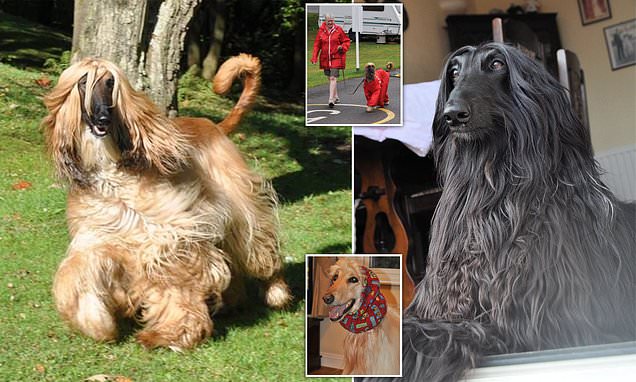 A couple who are the proud owners of a quartet of immaculately coiffed Afghan Hounds have told how they devote hours every week to bathing and grooming their prized pets.

Grandparents Sue, 67, and Phil Robjant, 68, from Southend-on-Sea in Essex, spend eight hours each week washing, blow drying and combing the four dogs’ glossy coats – which they also brush daily for around half an hour.

Their pets; Coco, Rosie, Libby-Lou, and new Afghan Hound puppy Ronnie, enjoy a diet of fresh chicken and mince – plus a weekly treat of proper steak – and the Robjants have even invested £600 in a specialist blow dryer and a built-in grooming table at their home to ensure the dogs are looking their best.

The Robjants spend around £75 a week on carefully prepared food, and regularly fork out more than £100 on specialist shampoo and conditioner for their pets – and insist that people ‘can’t get over how beautiful they are’ as a result. 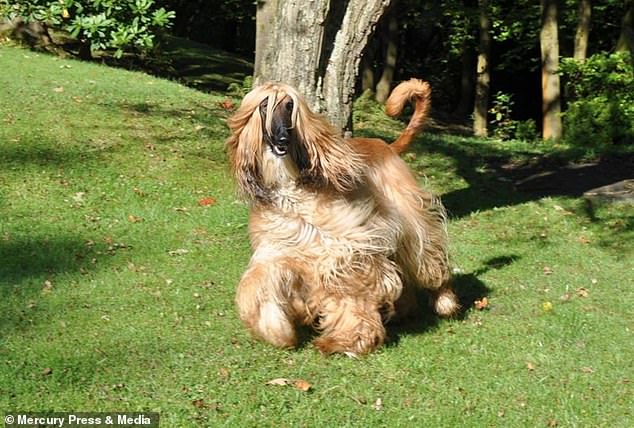 Coco is one four Afghan Hounds owned by Sue and Phil Robjant, from Southend-on-Sea, in Essex. The grandparents devote hours a week to bathing and grooming their beloved pets, who enjoy a diet of chicken and mince – plus steak once a week 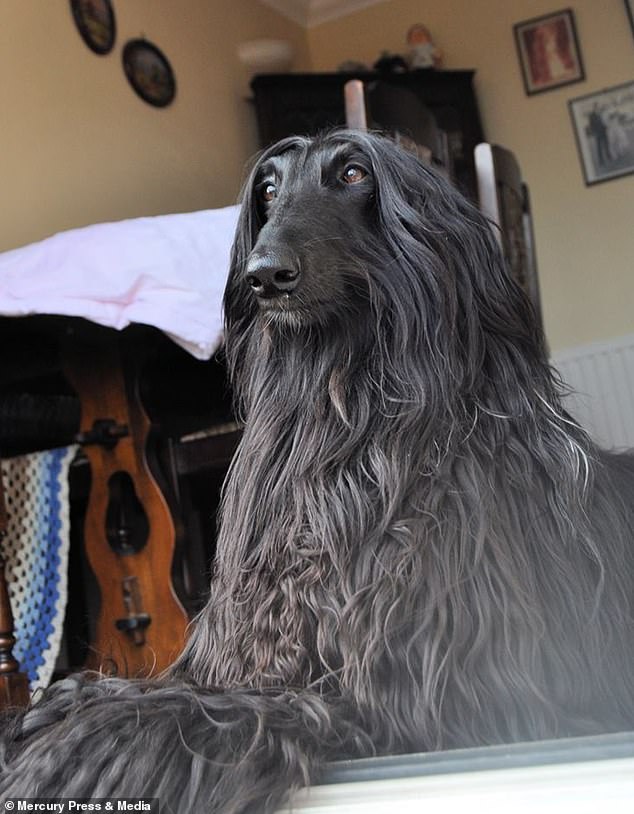 Libby-Lou, seven, is one of the Robjants’ four Afghan Hounds – all of whom are indulged with extensive weekly pampering sessions

The couple, who have been passionate about Afghan Hounds since getting their first, Cleo, back in 1975, recently added puppy Ronnie to their brood to mark their 40th wedding anniversary.

Retired rail depot manager Phil, of Southend-on-Sea, Essex, said: ‘Their long hair is quite iconic and when they’re all groomed they look so lovely. It does take hours of our time though.

‘Once a week the dogs have a bath and then they’re dried and brushed. It takes about two hours for each dog.

‘We tried out lots of different shampoos and conditioners to find the best ones. Our bathroom looks more like a chemists. ‘We spend about half an hour every day giving them a good brush too so it does take a fair bit of dedication to keep their coats looking good. 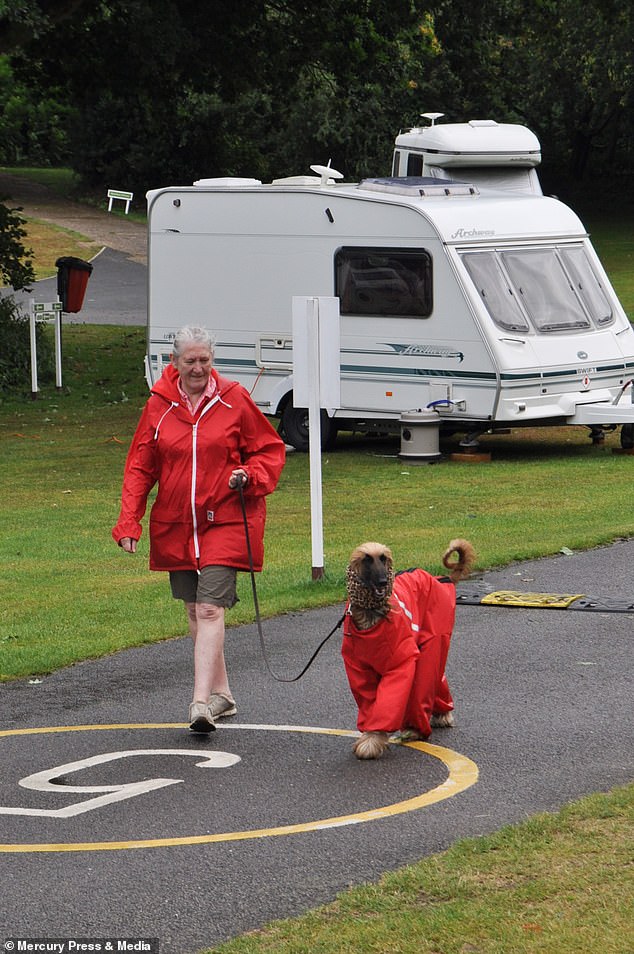 Sue takes Coco, dressed in her bespoke waterproof jacket and a headscarf to protect her coat, for a stroll 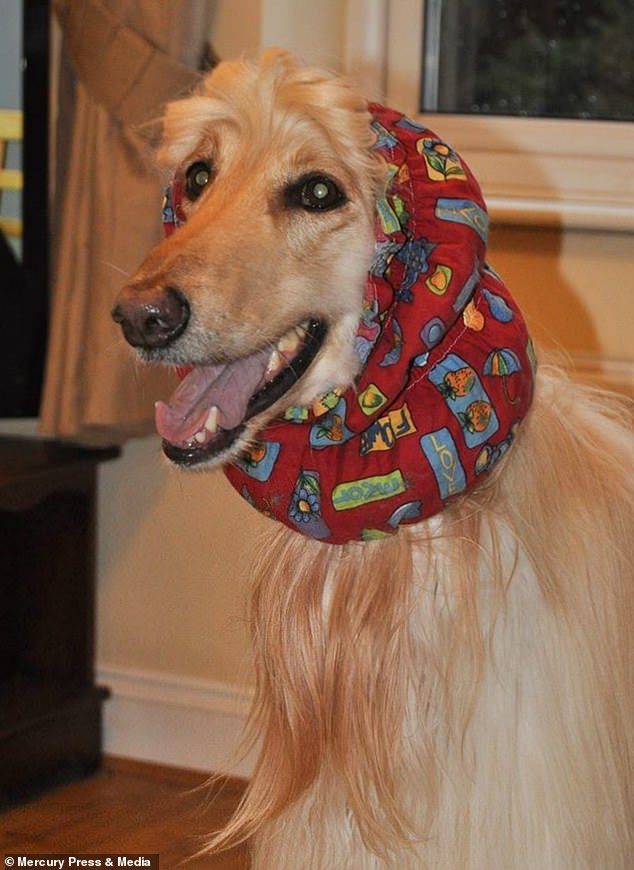 Rosie is seen wearing her specially designed snood, which she wears to keep her ears clean while she’s eating 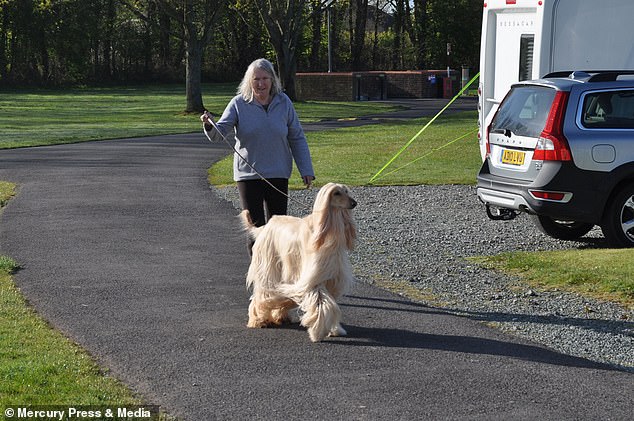 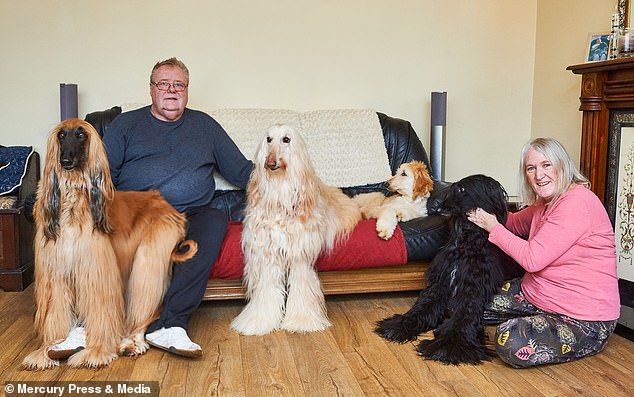 Phil and Sue Robjant, from Southend-on-Sea in Essex, are seen with (left to right) Coco, Rosie, Ronnie and Libby-Lou 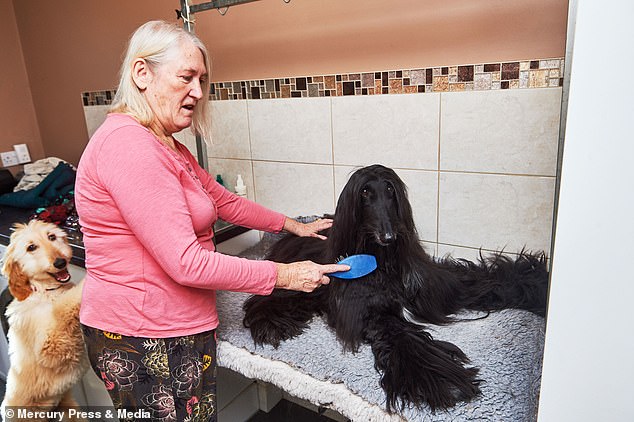 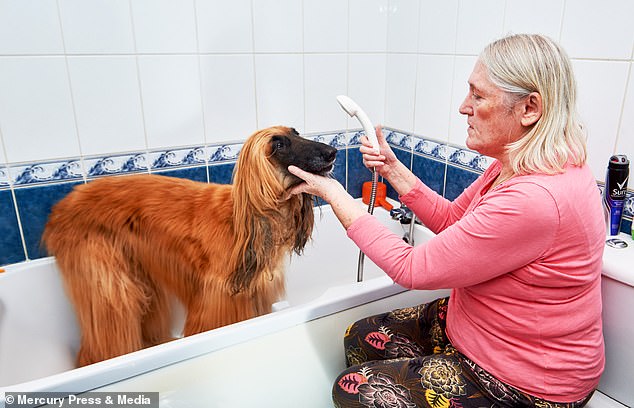 Sue gives Coco a scrub down in the Robjants bathroom, using the shower head to ensure her coat is sparkling clean

Phil said: ‘We decided because we had to groom them so often, it would be best to have a grooming table built into our pantry and we’ve got a proper upright blow-dryer.

‘They love it. They get up on the table and stand their waiting to be brushed. They’re so good.

‘They’re worth all the effort. It’s just one of those things you accept when you take on an Afghan puppy. And brushing their long hair is actually quite therapeutic.

‘We also make sure they have the best diet as it keeps them and their coats healthy. They eat fresh chicken and mince and once every week they have proper steak. And Coco is partial to sardines.

‘Sue cooks for them all. It’s food good enough for humans. Once a woman in the supermarket asked us if we were having a barbecue.

‘I suppose it’s all expensive but that’s the commitment you take on. We said all along we don’t care what it costs, they’re going to live the best life.

‘When it comes to the dogs, money just isn’t an issue. We both worked all our lives for what we’ve got and we want them to have the absolute best.

Sue, a retired underwriter, and Phil also take their dogs along with them when they go on holiday.

‘If they want or need something, we don’t care how much it is,’ Phil said.

‘We do spoil them. They run the house and we take them on holiday with us in our motor home. They love it. They live a life of luxury.

‘But we’re not the only ones. A lot of people in the Afghan community know what a major commitment they are.’

Along with their lavish grooming routine, the pooches have special ‘snoods’ to wear over their ears to stop them getting dirty and their own full-body raincoats to protect them from the elements.

Whether sporting their unusual accessories or not, the four Afghans attract a lot of attention wherever they go as people are in awe of their magnificent manes. And dad-of-three Phil, who also has seven grandchildren, says his and Sue’s spoilt pups lap up the attention as they know exactly how beautiful they are.

Phil said: ‘When we go out anywhere, people make such a fuss of the dogs. People can’t get over how beautiful they are and how lovely their hair is. ‘We take them away about four times a year and we get stopped everywhere we go. Strangers know us as the people with the Afghan Hounds.

‘A lot of people have never heard of Afghan Hounds or tell us they haven’t seen any around for years which seems a real shame as they’re an ancient breed.

‘We can’t go anywhere without people admiring the dogs. And the dogs just stand there with their noses in the air. They know exactly how lovely they are. It’s so funny. ‘They love all the attention they get.’ 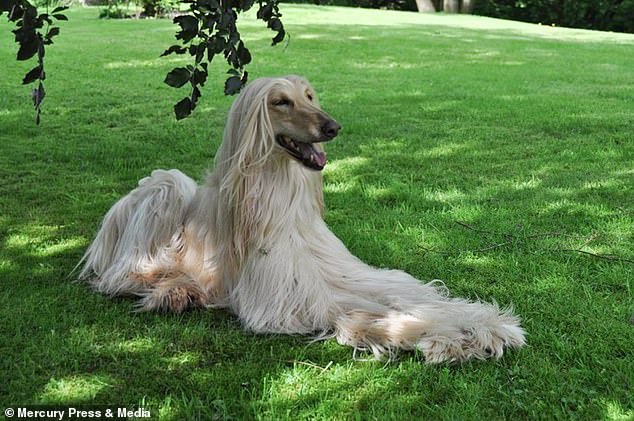 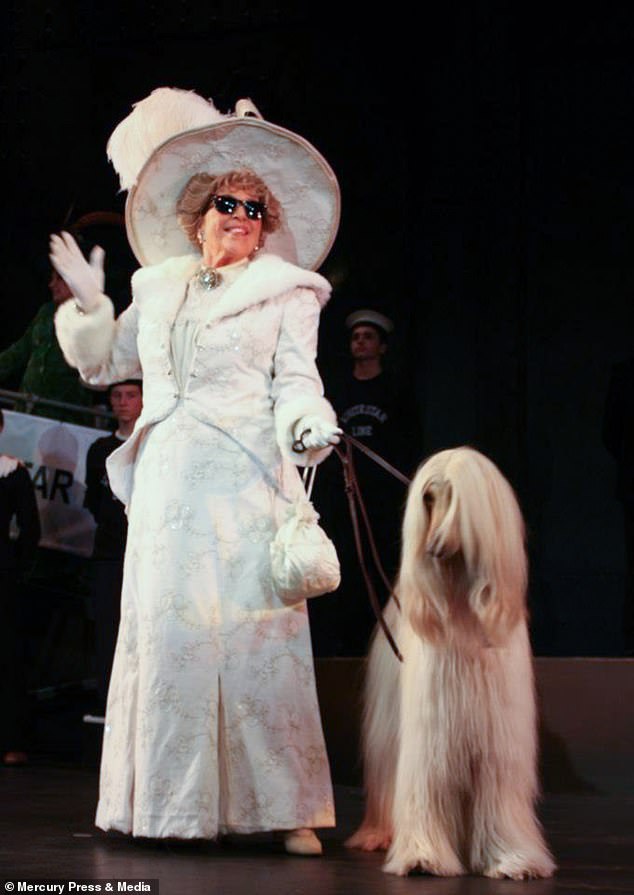 Long fans of the breed, the Robjants were also once proud owners of Roxie – seen on stage appearing in an adaptation of Titanic – who sadly passed away

‘They’re such a great breed. People think they’re stupid but they’re not at all. They can just be a bit aloof.

‘They’re actually really affectionate and they’re great with our grandkids. They’ve all got so much character.’

The couple, who recently celebrated their 40th wedding anniversary and bought Ronnie to commemorate the occasion, have had a troop of Afghan Hounds since the 1970s – including Roxie, a much loved family pet who sadly passed away.

After falling in love with a friend’s Afghan Hound, Phil and Sue bought their first, named Cleo, in 1975 and haven’t looked back since, surrounding themselves and their family with the beautiful breed. 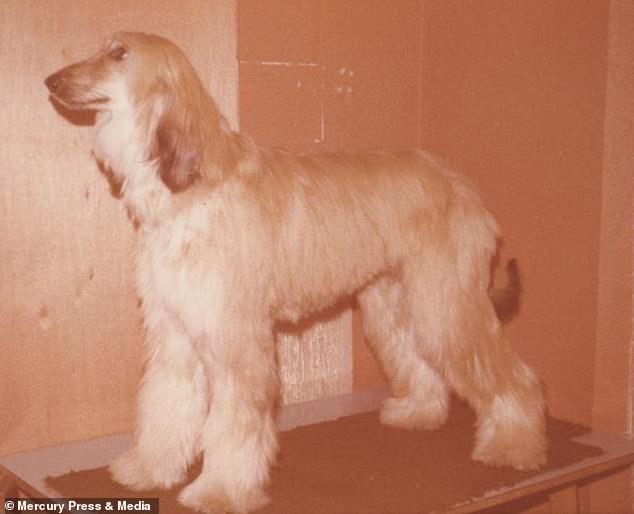 Gone but never forgotten: The Robjants got their first Afghan Hound, named Cleo, back in 1975, and have been passionate about the breed ever since

Over the years, all of the couple’s pristine pooches have competed in and won various dog shows, and Roxie even starred in a theatre adaptation of Titanic when she was alive.

Phil said: ‘My friend got an Afghan and it was the first one I had ever seen. I just fell in love straight away.

‘He was such a lovely dog so I said to Sue that as soon as we could afford it we would get one. We bought Cleo home in 1975 and we’ve had them ever since. We have never had any other breed.

‘I always said to Sue that when we retired, I wanted to be surrounded by Afghan Hounds – and we’ve achieved it. ‘Nearly all of them have won awards at dog shows over the years. They have all been so lovely, They’re such beautiful dogs. ‘When Roxie was in the Titanic, we would get stopped by strangers asking if she was the dog from Titanic. It’s like she was the star of the show.’