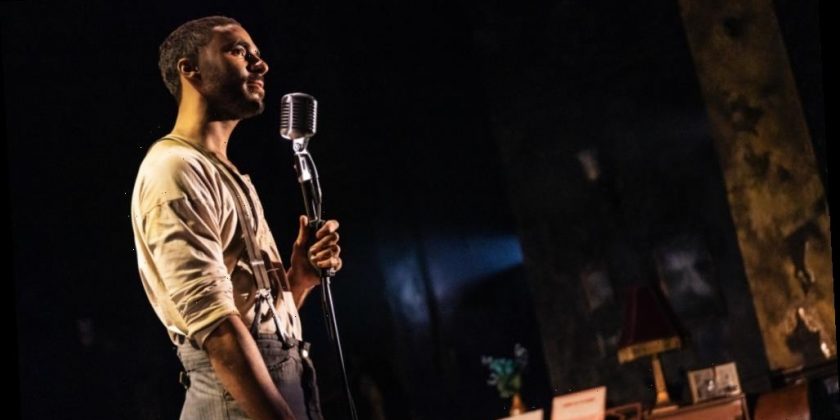 Some people think Bob Dylan’s music is depressing — and in “Girl From the North Country,” Conor McPherson makes the case by setting more than twenty of Dylan’s songs into a surprisingly sturdy narrative about the residents of a seedy boarding house in Duluth, Minnesota, at the height of the Depression in 1934. Although individual tunes like “Slow Train” and “Duquesne Whistle” feel as if they were written in direct response to the Great Depression, other songs don’t always suit the specific dramatic situations in which they’re set.

But overall, the morose music captures the bleakness of the period and the down-and-out hopelessness of those Americans who barely lived through it. So does the bare-bones wooden set by Rae Smith, who also designed the studiously appropriate costumes of subdued colors and tiny prints. In particular, Mark Henderson’s melancholy lighting design casts shadows everywhere, including the faces of the actors, who have that wan, hard-times look of people who eat to stay alive, but don’t ever have dessert.

As directed by the playwright, an inspired ensemble of actor-singers assume the identities of residents of the boarding house, along with those people from town who drop in to share in the misery. And when they need to, the players smoothly re-assemble themselves into a full-throated chorus that provides musical commentary on the sad sights they witness. Anyone who associates Dylan’s songs exclusively with his own eccentric delivery of them should be astounded by the depth and insights that professional actors with great voices can bring to them.

Jay O. Sanders makes a man — a decent but deeply flawed human being — out of Nick Laine, the owner of the boardinghouse. Although Nick doesn’t get to sing like the other characters, Sanders powerfully conveys all the practical burdens and emotional conflicts that beset Nick. For one thing, the bank is about to foreclose on the boarding house. For another thing, he’s plotting to leave his wife and abandon their failing boarding house.

Nick has no idea that his wife, Elizabeth (the wonderful, heartbreaking Mare Winningham), who has early-onset dementia, is perfectly aware that he intends to abandon her and run off with one of the boarders. That boarder is the widowed Mrs. Neilsen, played with elegance by Jeannette Bayardelle, who also brings a lovely air of mystery to her stunning solo, “Went to See the Gypsy.”  The red dress she wears with such confidence plainly identifies her as a life force.

The other life force is Marianne (Kimber Elayne Sprawl, a find), the Laines’ adopted daughter. While Nick clumsily tries to arrange a safe marriage for Marianne, Sprawl’s gorgeous rendering of “Tight Connection to My Heart” (“Has Anybody Seen My Love”) lets us know that she has her own ideas about love and marriage – and they don’t include wedding the old man (a very spry Tom Nelis) Nick has dredged up for her.

Other songs are more slippery in meaning. “Slow Train” could be a contemporary young man’s conflicted feelings about his uncertain future. Here, it’s the lament of a mysterious wanderer named Joe Scott (played by the charismatic Austin Scott) who doesn’t anticipate having much of a future at all. The song conveys a sense of dread that wouldn’t be out of place during the Great Depression, and as counterpoint, “License to Kill” drops broad hints about Joe’s fears of what might be “comin’ up around the bend.”

It’s probably a lost cause trying to fit every chosen song into a plot-worthy moment in the show. It doesn’t make dramatic sense that Elizabeth should be the soloist on “Like a Rolling Stone” and “Forever Young.” But Winningham puts so much heart into both songs that she can leave you trembling. And she, more than anyone else in the cast, seems to understand that Dylan’s narrative lyrics, mainly written in the 1960s and 70s, express a sense of existential detachment, a yearning for human connection that reflect the uncertainties of 1930s America.