In hindsight, the online furore over the 2016 Ghostbusters reboot looks like a watershed in popular culture and beyond, showing just how much fury can still be roused by the very idea of letting girls in the clubhouse.

Five years on, Ghostbusters: Afterlife – directed by Jason Reitman (Juno), the son of original Ghostbusters director Ivan Reitman – is quick to reassure us that single mother Callie Spengler (Carrie Coon) takes no interest in science whatever. Still, she compensates in other fields: “Your quesadillas are excellent.” 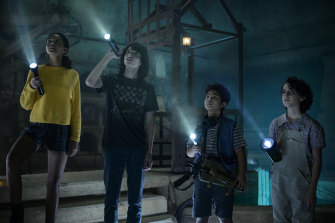 The twist is that this patronising line is spoken by Callie’s 12-year-old daughter Phoebe (McKenna Grace), a prodigy who has inherited the nerdy obsessions of her deceased grandfather Egon (played by the late Harold Ramis in the 1980s Ghostbusters films, which he also co-wrote).

Phoebe is not just the smartest person in any room but the central character, implying an odd calculation by Reitman and his team: that fans reluctant to identify with adult women may feel more comfortable with pre-adolescent girls, especially girls who show sufficient respect for their male forebears.

This apparent paradox is typical of Ghostbusters: Afterlife, an exercise in nostalgia that drastically departs from what has come before. The dream of regaining the past is explicitly the subject of the story, which begins when Callie, Phoebe and Phoebe’s older brother Trevor (Finn Wolfhard), move to a creepy old house in Summerville, Oklahoma.

Unsurprisingly, this middle-of-nowhere town turns out to be ground zero for America’s latest impending apocalypse, with most of the necessary exposition supplied by Paul Rudd as goofy seismologist Gary Grooberson, who befriends Phoebe while courting her mother.

The earlier comic scenes have the deftness expected of the younger Reitman – and if you want a latter-day blend of Bill Murray’s irreverence and Dan Aykroyd’s nerdy enthusiasm, Rudd is clearly the guy to call.

Ultimately, though, it’s up to the kids to save the day by reviving that old-time Ghostbusters spirit, founded in the very American conviction that the mysteries of the beyond will yield to anyone possessed of a can-do attitude and sufficient firepower.

The gruesomely sentimental climax involves family ties repaired from beyond the grave, a quick shout-out to Reagan, and confirmation, if any were needed, that the original Ghostbusters were heroes all along.

As ever, all this is accomplished through the ritual purging of evil forces who are more like demons than ghosts in the usual sense – and who are linked with menacing sexuality to a degree that skirts the bounds of what’s permissible in a film for all ages (in contrast to Phoebe’s non-threatening androgyny).

For further understanding, it might be necessary to consult the ghost of Sigmund Freud. But perhaps it’s best some mysteries remain unexplored.