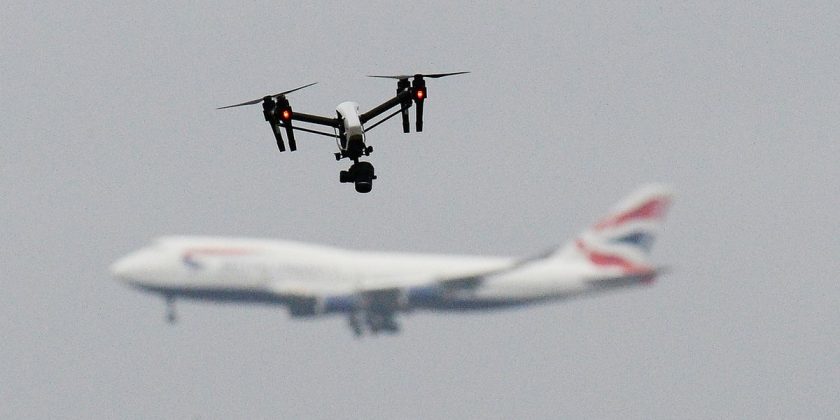 An eyewitness claims he saw a drone pilot near Gatwick Airport packing two craft into a bag before fleeing on a bicycle.

Paul Motts, 52, reportedly claims to have seen the pilot dressed in high-visibility clothing on a rural road four miles from the airport.

Mr Motts, who says he saw a suspect aged in his 30s at 6.30pm on Thursday, described how he was packing away two drones measuring 4ft and 2ft into a rucksack.

Police last night arrested a man and a woman in connection with the "criminal use of drones". It is not known if the person seen by Mr Motts is the man who was arrested.

The airport fully reopened on Friday after being forced to ground flights across a 36-hour period.

Detectives say there are "proactive investigations" into the mayhem at Britain’s second biggest airport.

EDF energy manager Mr Motts told The Sun: “I was delivering a parcel and drove past a suspicious man in fluorescent cycling gear crouching over a large drone which was all lit up.

“He was leaning over and doing something to it. He was totally focused and did not look up when I drove past.

“It looked like he was packing the drones away ,two minutes later we turned around and came across him cycling away, I expect he wanted to disassemble the drone as quickly as possible and get away as fast as he could."

Military equipment was used on Friday to stop further drone disruption while a range of tactics are in place if any unmanned aircraft are seen inside the airport perimeter.

One piece of equipment believed to have been deployed at the airport is the Israeli-developed Drone Dome system, which can detect drones using radar.

It can also jam communications between the drone and its operator, enabling authorities to take control of and land the drone.

Superintendent James Collis, of Sussex Police, said: "As part of our ongoing investigations into the criminal use of drones which has severely disrupted flights in and out of Gatwick Airport, Sussex Police made two arrests just after 10pm on December 21.

"Our investigations are still ongoing, and our activities at the airport continue to build resilience to detect and mitigate further incursions from drones by deploying a range of tactics.

"We continue to urge the public, passengers and the wider community around Gatwick to be vigilant and support us by contacting us immediately if they believe they have any information that can help us in bringing those responsible to justice."