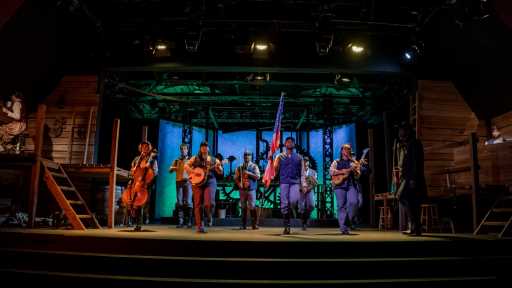 It’s not farfetched to think that the Industrial Age is imagining the Information Age in “Futurity,” the beautiful and ambitious musical written by César Alvarez along with the band he once fronted, the Lisps.

Under Helen R. Murray’s sage direction and the cast — beginning with leads Adrian Leigh Robinson and Nik Vlachos — the production at the Aurora Fox Arts Center is a deeply felt wonder that speaks to this current moment as surely as it does the Civil War past it is anchored in and a future peace that its inventors ache for.

If that sounds heady, the creators of this indie-rock musical knew it might. So, in the midst of Act I (it’s a fleet, two-act outing),  Vlachos (or is it his character Julian Munroe?) takes a moment to ask Robinson (or is it her character Ada Lovelace?) — a couple of questions about what exactly is unfolding on stage. It would be too winking a gesture if it weren’t so sincerely delivered. Indeed, one of the marvels of this clanglorious musical is its well of sympathy.

A soldier in the Union army, Munroe hopes to create a time travel machine that can leap into a future time of peace. It’s not altogether altruistic; he is trying to avoid what he fears is his fate. He seeks the aid of Lovelace, a British mathematician with the soul and skills of a poet. She comes by those attributes honestly. Her father was the romantic poet Lord Byron. Ada is also an early computer scientist.

Munroe and his Ohio regiment are headed to the Cumberland Gap, a strategic position that both the Union and Confederate armies fought for and secured a few times over the span of the war.

Don Randle brings a tempered martial mien to the General;  Damon Guerrasio plays the equally archetypically named Sergeant; and the rest of this nimble ensemble play Munroe’s fellow soldiers. They also play a variety of instruments, at one time holding their guitars and banjo like rifles with bayonets.

When Lovelace warns the audience, “Do not attempt to learn history from this musical,” and then adds with a smile, “or any musical,” take heed. The racially and gender-diverse ensemble, clad in Linda Morken’s apt and appealing costumes, offers an intentional gloss on Civil War cosplay.

“Futurity” celebrates the imagination, which can be a gateway to invention, a portal to escape, a window into the future. Here, it is all three as the two embark on bringing to life the massive gear-gadget machine toward the back of the stage to life. Munroe and Lovelace christen it the “Steam Brain.”

The machine itself (the handsome set is by Brandon Philip Case) is a nod to the pivotal and complicated invention of the steam engine and later the cotton gin. Its name and Munroe and Lovelace’s exchanges also foreshadow the arrival of artificial intelligence. When the Steam Brain is up and churning, the gears and noise of it (thanks to drummer Shane Franklin’s “Stomp”-like playfulness and Jen Orf’s lighting design) invite optimism but also tease the unintended consequences of technology.

Alvarez and the Lisps’ music is beautiful in its earthiness. Robinson and Vlachos’ voices, in chatter and song, create approachable magic. Throughout all of its highfalutin’ ideas about science and art, war and peace, “Futurity” maintains its connection to emotions. Among the instruments onstage: a banjo, ukulele, guitars and an accordian (played by Vlachos). A celloist sits stage-right (the night I attended, it was a stand-in for Neyla Pekarek).

From a perch to the left, Franklin plays the percussive thrum of the snare drum rhythms we’ve come to associate with slowly advancing regiments. The musical’s vigorous yet sorrow-laden movements and dance is the handiwork of choreographer Patrick Mueller.

The opening song, “Arkansas” captures the drama’s moral ambitions and its vast heart. “The prettiest girl I ever saw was on the banks of the Arkansas,” a soldier begins. Ada chimes in with, “Craziest thing I ever saw, big balloon floating o’er the Arkansas.” To which Julian adds, “Most wonderful thing I could make believe was a world where peace was the reigning queen.”

Then, with a hymn-like solemnity, the ensemble sings, “the ugliest thing that was ever thought, was a human being being sold and bought … .”

Not only does “Futurity” make a non-contrarian argument about the limits and boundlessness of the imagination, but it also does so with a tone of loving, mournful wonder.