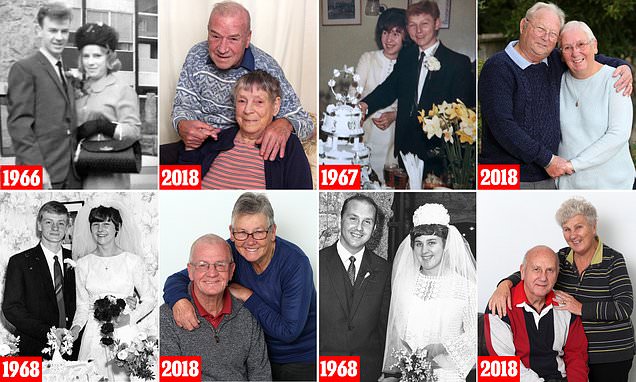 Like Femail, these four siblings have ALL hit their golden anniversary. Here they reveal how to make a marriage last 50 years

The year 1968, when the Femail section first appeared, was very special for one family. It was the year that saw the last of the four Cavill siblings become newlyweds — and 50 years later, all four are still happily married and have celebrated their golden wedding anniversaries.

What’s more, the Cavills all live within a few miles of each other and the home where they grew up in rural Cornwall.

The oldest of the family, John, was the first to walk down the aisle in 1966, followed almost a year to the day later by sister Mary in 1967. Then came Doreen and David, who married in 1968.

Poignantly, the siblings lost their dad when they were children. Percy Cavill, a boilermaker at Falmouth Docks, died of emphysema in 1955, aged 55, leaving his widow, Dora, then 48, to raise their young family alone.

‘Mum was tough. She had lived through the Blitz in London,’ recalls Doreen. ‘So there was no way she was going to go under.’

Here the couples tell their own stories of the past 50 years . . . 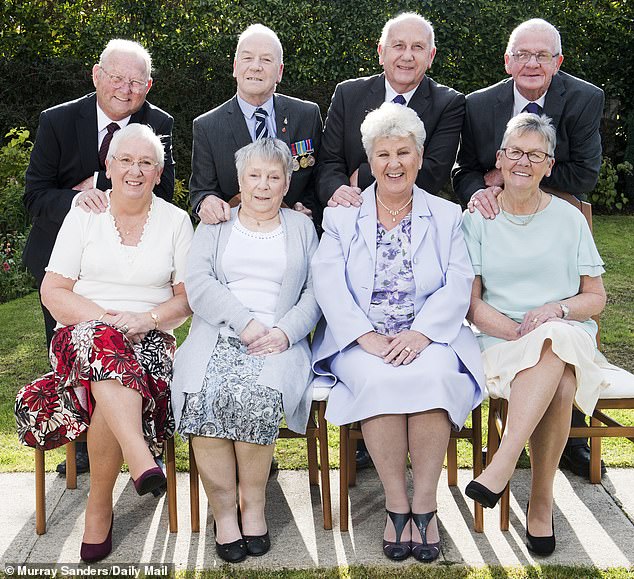 Four siblings from the Cavill family have all hit their golden anniversaries – and here they reveal their secrets to 50 years of marriage. Pictured left to right: Mary and Bill Rollason, Maureen and John Cavill, Sheila and David Cavill, and Doreen and David MacQueen In 1968, the Sheila and David Cavill married (pictured). The siblings thank their mother for their lasting marriages by teaching them that family comes first after raising them alone following the death of their father in 1955

JOHN SAYS: It was love at first sight when I met Maureen. Her father, a colleague, had invited me for tea. Maureen was in the sitting room, hair in curlers, doing the ironing. I flipped and fell for her.

Those first years were tough. I was in the Navy, and spending 18 months at a stretch at sea. In my pocket I carried a lock of Maureen’s hair and a lipstick kiss on a piece of paper. I marked off the days until we were reunited, like a prisoner waiting for his release.

I missed her so much, I left after nine years and retrained as a decorator. By then we had the children. We both loved having them so much that in 1988 we decided to become foster parents, and over the next 25 years we fostered at least 60 children.

Many were very disturbed — the result of broken homes or drug-addict parents. But they would calm down as soon as they saw our lovely poodle. Within seconds, they would be burying their faces in her fur.

I still feel blessed to be married to Maureen. She cared for me brilliantly when I had a heart attack four years ago. Now, after she had a minor stroke two years ago, it’s my turn to look after her. That’s what love is all about. 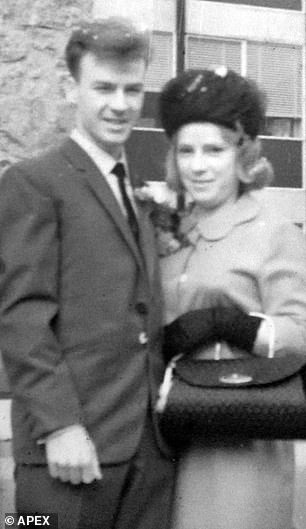 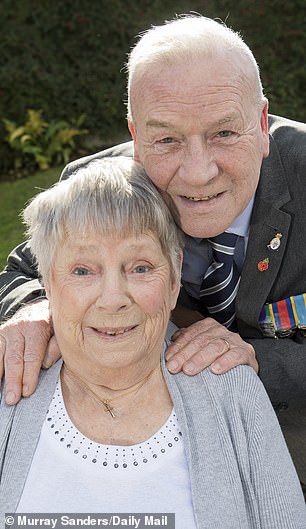 John and Maureen Cavill, married on March 26, 1966. John believes their marriage has lasted more than 50 years because they loved having children together, and ended up fostering at least 60 kids over the years

STILL CUDDLING UP ON THE SOFA

MARY SAYS: I knew on our honeymoon our marriage was for keeps. It wasn’t just the passion — it was the laughs and the fact that nothing fazed us. We still hold hands in the street and cuddle on the sofa at night.

We had a quiet wedding. I was just 19 and Bill 22, and for our honeymoon Bill hired a car so we could tour Britain for a week.

I was in charge of map reading, but was so hopeless that, after our first night in Exeter, I accidentally directed us all the way back home to Truro. Bill just laughed and said we might as well stick to day trips.

There have been tough times, of course. Bill was made redundant just as we signed the mortgage agreement on our first house in 1980. But we muddled through.

We both lost our dads when we were children — I was seven and Bill 11, and that’s been a bond between us.

It may be a cliche but the secret of a good marriage is give and take. Bill’s always been desperate to go on safari. I was petrified. But I agreed to go to Kenya last year and guess what: I loved it and can’t wait to go again. 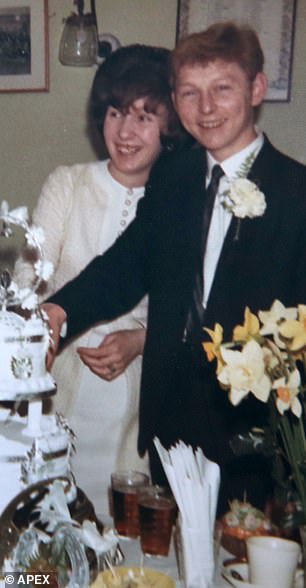 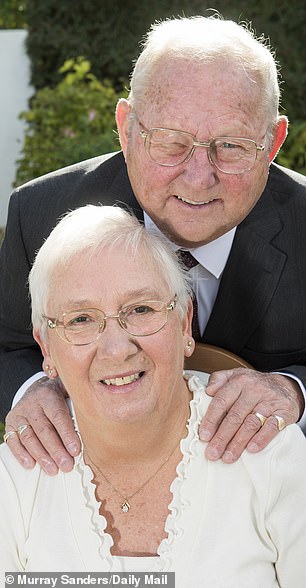 Mary and Bill Rollason married on March 25, 1967. Mary believes the secret to a good marriage is give and take, and the pair share a special bond because they both lost their fathers as children 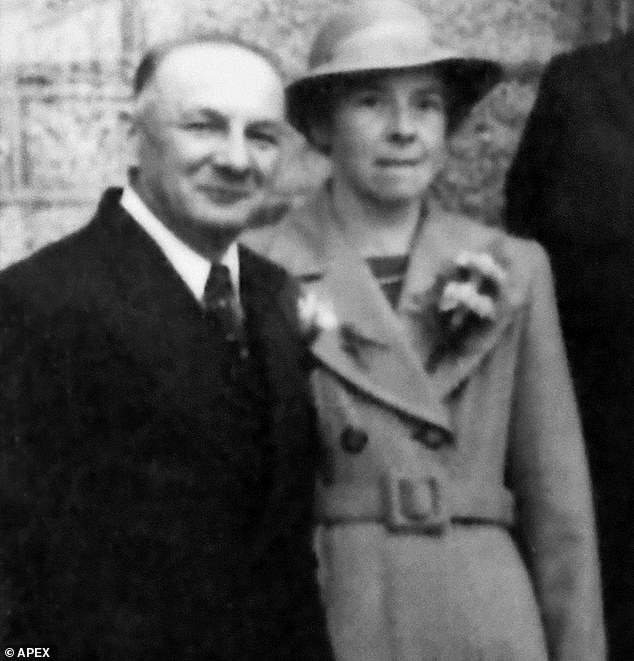 The family thank their mother Dora, pictured with her husband Percival, for their long marriages as she taught them to put family first

Doreen and David MacQueen married on June 15, 1968. Doreen, 69, a retired cleaner, and David, 73, a retired postman, have two children: Ian, 47, a policeman, and Helen, 41, a human resources supervisor, and three grandchildren.

DOREEN SAYS: When I left home on my brother John’s arm on my wedding day, the neighbours came rushing out to ‘ooh and ahh’ over my dress. Then I heard one of them whisper: ‘I give it a year.’ I don’t blame her — I was barely 19 and had known David just six months.

In fact, I told my brother that morning I wanted to call the whole thing off. He said it was far too late and virtually dragged me down the aisle. He was right, as I have absolutely no regrets.

However, any couple who says they haven’t squabbled in 50 years is fibbing. We’ve definitely had our share of humdingers.

I was hot-tempered as a young woman. And we didn’t have the easiest start. We couldn’t afford our own home, so we started married life in my childhood bedroom, with my mum across the landing. We’ve lived here ever since, and Mum was with us until her death. 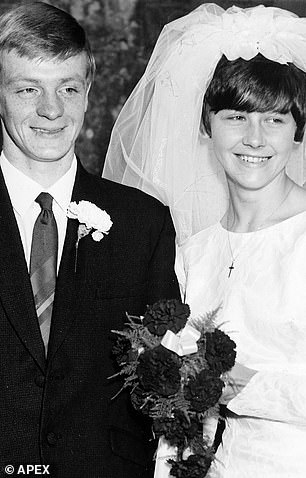 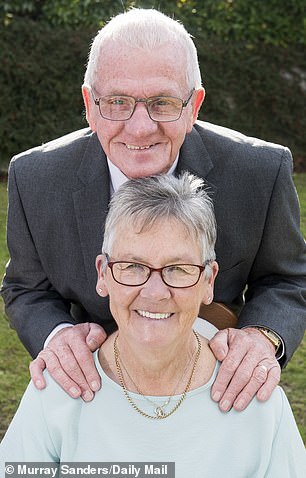 Doreen and David MacQueen married on June 15, 1968. The pair hit a rough patch after 25 years, but they rekindled their love after becoming grandparents

So poor David had to tolerate not just a cross wife, but a mother-in-law who always took her daughter’s side.

We hit a rough patch after we’d been married for 25 years. We’d raised the children and wondered if there was a point going on.

But then our son, Ian, announced he was to be a dad, to our first grandchild, Craig. A granddaughter, Bethany, soon followed and a whole new horizon opened.

We love being grandparents and I adored watching David with our grandchildren. It made me fall in love with him all over again.

Strangely, life has come full circle. Just like Mum, our daughter, Helen, is a single parent to her daughter, Jodie, who’s 21 and has just graduated from university. For the first years they lived with us — just as we did with Mum. We celebrated our golden wedding with a holiday in Corfu.

We feel lucky for finding each other, and so grateful we didn’t give up on our marriage.

QUITTING IS NOT IN OUR DNA

DAVID SAYS: I adored my mum — she was strong, loving and fought like a tiger to ensure her kids never went without anything.

As soon as I met Sheila, who was working in a local fish and chip shop, I knew I had found the woman I wanted to marry.

Like Mum, Sheila is gentle on the outside but tough inside. She dumped me countless times before she agreed to get engaged. She then spent our wedding night in tears because she missed her mum! But I understood — we both adored our mothers.

I’m sure it’s not coincidence that all four of us siblings have notched up 50 years. Mum taught us to put family first.

I suspect we’ve all had to work on our marriages. Sheila and I hit a blip when I retired and we had to learn to live together again. Sheila says she’d got used to her own space, and even the sound of me crunching my toast would drive her nuts!

But none of us is a quitter. It’s just not in our family tradition to get divorced.

All the little irritations pale into insignificance compared with the comfort of growing old together. 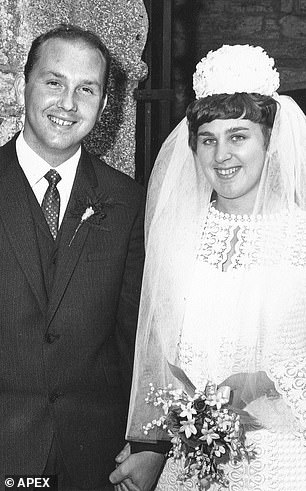 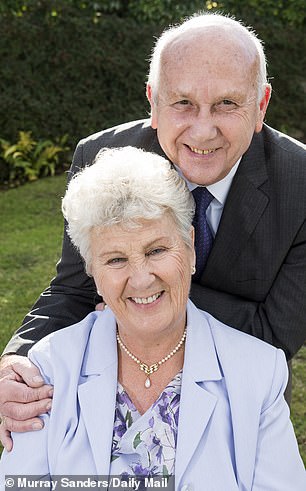 David and Sheila Cavill married on September 7, 1968. David believes all the little irritations pale into insignificance compared with the comfort of growing old together