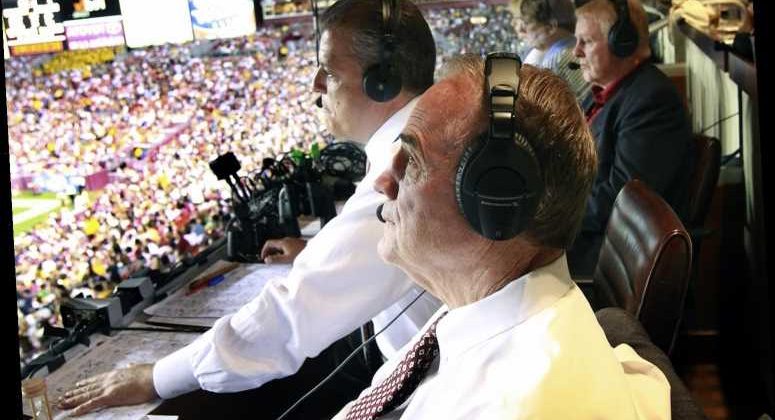 Michael, who resigned from his role in July following an earlier report from The Post in which 15 women said they faced sexual harassment while employed by the team, denied the allegations in an interview with the Washington newspaper.

“Nothing can be further from the truth. I was never asked to nor did I ask someone to compile videos as you described,” he said.

Brad Baker, a former member of Michael’s staff, told the outlet that Michael referred to the outtakes as “the good bits” and instructed staffers to make the video for team owner Daniel Snyder. “Larry said something to the effect of, ‘We have a special project that we need to get done for the owner today: He needs us to get the good bits of the behind-the-scenes video from the cheerleader shoot onto a DVD for him,’” Baker alleged.

The report also detailed an accusation from former cheerleader Tiffany Bacon Scourby, who claimed Snyder approached her at a 2004 event and invited her to a hotel room with one of his friends.

"I want to unequivocally state that this never happened," Snyder said of the accusation in a lengthy statement shared by reporter Adam Schefter following the story’s publication Wednesday. "Furthermore, I do not have any knowledge of the 10-year-old videos referenced in the story. I did not request their creation, and I never saw them."

“I take full responsibility for the culture of our organization,” Snyder added in the statement. “I have begun taking any and all steps necessary to ensure that the Washington Football Team is an organization that is diverse, inclusive and respectful of all.”

Still, he said The Post article “reads like a ‘hit job’ ” and accused the paper of “relying on unnamed sources and allegations that are largely 10 to twenty years old.”

The Washington Football Team issued its own statement Wednesday evening, saying that the team is “deeply distressed by these terrible allegations and are committed to investigating them fully.”

“Our priority is creating a culture where our employees — on and off the field — are respected and empowered,” it read.

NFL commissioner Roger Goodell also issued a statement, sharing that an “independent investigation into these issues” is underway.

"We strongly condemn the unprofessional, disturbing and abhorrent behavior and workplace environment alleged in the report which is entirely inconsistent with our standards and has no place in the NFL,” Goodell’s statement said.