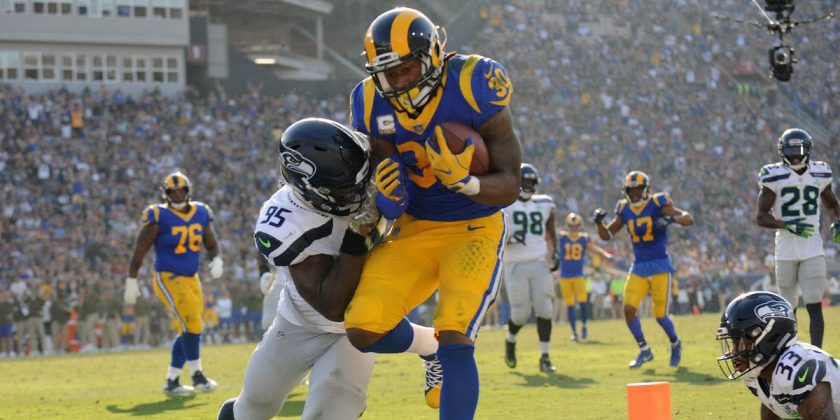 Todd Gurley is "the one non-quarterback offensive player" in line to be the NFL’s MVP this season, according to former corner-back Jason Bell.

Speaking ahead of the Los Angeles Rams’ game against the Kansas City Chiefs in California on Monday night, Bell talked-up the NFL’s leading touchdown-scorer Gurley as a contender for the season’s biggest individual prize.

Gurley signed a new record-breaking contract with the Rams back in July, making him the highest-paid running-back in NFL history.

The 24-year-old has registered 13 touchdowns this season as his side have swept to the top of the NFC West with nine wins from 10 games.

“The offense goes through Todd Gurley, that’s how it works,” Bell told the Express.

“If Todd Gurley is going, it works. The way the offense is set up – it’s a run-driven offense and they’ve got the guy who can do it.

“He’s up in the MVP race as the one non-quarterback offensive player.”

Gurley’s new deal with the Rams represented a turning-point in the value placed on running-backs in the NFL, according to Forbes, after the advent of the modern passing game over the previous 20 years shifted the game’s attacking focus onto quarter-backs.

The four-year, $60million deal signed by Gurley is set to keep him in LA until 2023.