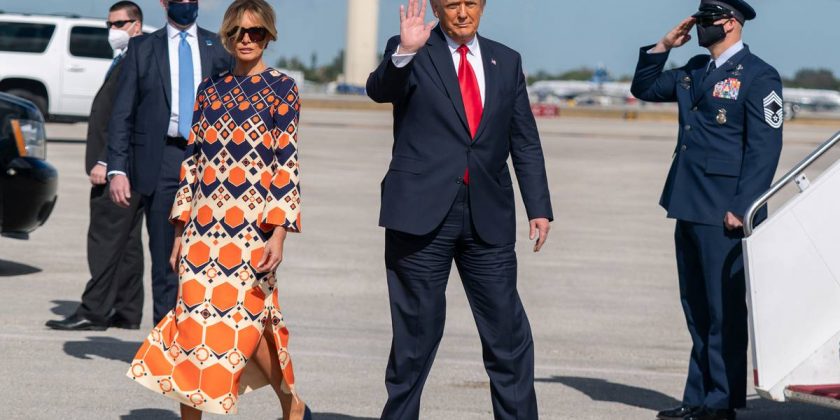 Former First Lady Melania Trump walked away from her husband, leaving him to wave at the cameras by himself, as the couple stepped off a jet plane into their new life.

Wearing an orange-emblazoned Gucci dress after arriving in Palm Beach, Florida, from Washington, DC, with Donald Trump — the journey marked the duo’s last flight on Air Force One as President and First Lady.

They could be seen together, as they disembarked the plane and walked down the ramp. However, as they hit the bottom Melania, expressionless, continues walking while the former president stops to face the camera and wave by himself.

On closer inspection, it appears Trump says something to her before guiding her away with his hand towards the car, but the incident signals a frosty start to their new life at Trump’s Mar-a-Lago resort.

Some commentators believe Melania is unhappy to be moving to Florida as she wanted to live in New York.

She had lived in the Big Apple separately to her husband during the first five months of Trump’s presidency to be with their son Barron while he finished school.

There have been unproven rumours for years that she never even moved into the White House as she didn’t like living there. This week the New York Times reported she has spent the past few weeks looking for a suitable place to live around Jupiter, Florida.

Jupiter is just north of Palm Beach, where her stepson, Donald Trump Jr, and his girlfriend, Kimberly Guilfoyle, also were reported to be looking to buy a home.

The relocation is becoming increasingly awkward as the Trumps are also facing a backlash from their new neighbours at Mar-a-Lago who don’t want them there.

The Washington Post reports, they have banded together and issued a demand letter to the town of Palm Beach and the US Secret Service asserting that Trump lost his legal right to live at Mar-a-Lago because of an agreement he signed in the early 1990s when he converted the estate from his private residence to a private club.

“For years, various neighbours have raised concerns about disruptions, such as clogged traffic and blocked streets, caused by the president’s frequent trips to the club,” the Post reports.

“Even before he was president, Trump created ill will in the town by refusing to comply with even basic local requirements, such as adhering to height limits for a massive flagpole he installed.”

After Trump’s election loss, Melania was said to have been “in a state of shock” and joined her husband in making the claim that he had actually won.

The Times reported that as the weeks wore on, it was said the former model became “emotionally checked out” of life in the White House even before a mob of her husband’s supporters stormed the US Capitol on January 6.

Her public appearances with Trump have infamously been awkward over the years, with cameras catching her swatting away her husband’s hand on more than one occasion.

The awkwardness began at Trump’s swearing-in ceremony when Melania smiled at her husband and then completely dropped the smile, opting for a deep frown when he turned his back to her.

Shortly after, there was a cringe-worthy moment at the couple’s arrival to the nation’s capital. While exiting their plane in Washington, DC for the inauguration, then President-elect Trump reached for his wife’s hand, only for her to quickly grab his hand and quickly drop it away from her.

His hand was swatted away again during a trip to Israel in 2017.

As the Trumps descended the ramp from Air Force One and walked with the Netanyahus, Donald reached for his wife’s hand, only for her to visibly swat his grasp away from her.

Then there was an infamous handshake greeting between the pair in 2017.

At an event at Joint Base Andrews in Maryland, Melania appeared on stage in front of military members and introduced her husband, who was set to address the audience.

Instead of giving his wife a kiss or hug, Trump shook her hand when he got up on the stage.