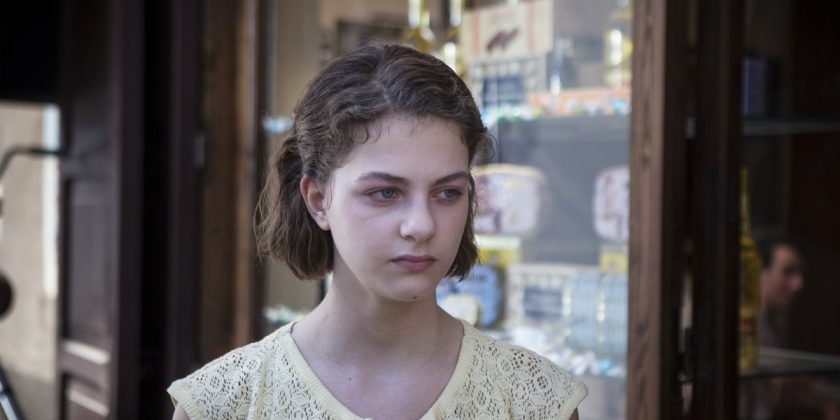 Spoilers ahead for My Brilliant Friend Episodes 3 and 4 Getting your period for the first time can be terrifying, but it’s doubly so for Elena Greco (Margherita Mazzucco) on HBO’s My Brilliant Friend. In the third episode, which aired on Sunday, Nov. 25, the young Greco notices she’s bleeding. She doesn’t go to her mother, with whom she has a complicated relationship, but instead walks across their neighborhood courtyard, a blood stain visible through her skirt. "I hurt myself between my legs," Elena, affectionately called Lenu, says once she finds her best friend (and sometimes nemesis) Lila (Gaia Girace). That she first believes her period is somehow her fault is just one telling example of how violent puberty is for the young women of My Brilliant Friend. It’s treated not as a normal event that everyone goes through, but something to be feared, especially because of the unwanted male attention that comes with it.

Lila hasn’t gotten her period yet and has no idea what Lenu’s talking about. However, Carmela (Francesca Pezzella) explains that "Aunt Flo has paid her a visit." Lila, mad that she doesn’t have her period yet, says they’re disgusting and that anyone who gets them is disgusting, too. Even Mrs. Greco seems to imply that periods are shameful, telling her daughter that she needs to pin her pads securely to her underwear because if they fall out, it could be "really embarrassing" for her. Not because it’s a pain to wash out, or messy, but that it’s sure to encourage bullying wherever she ends up. 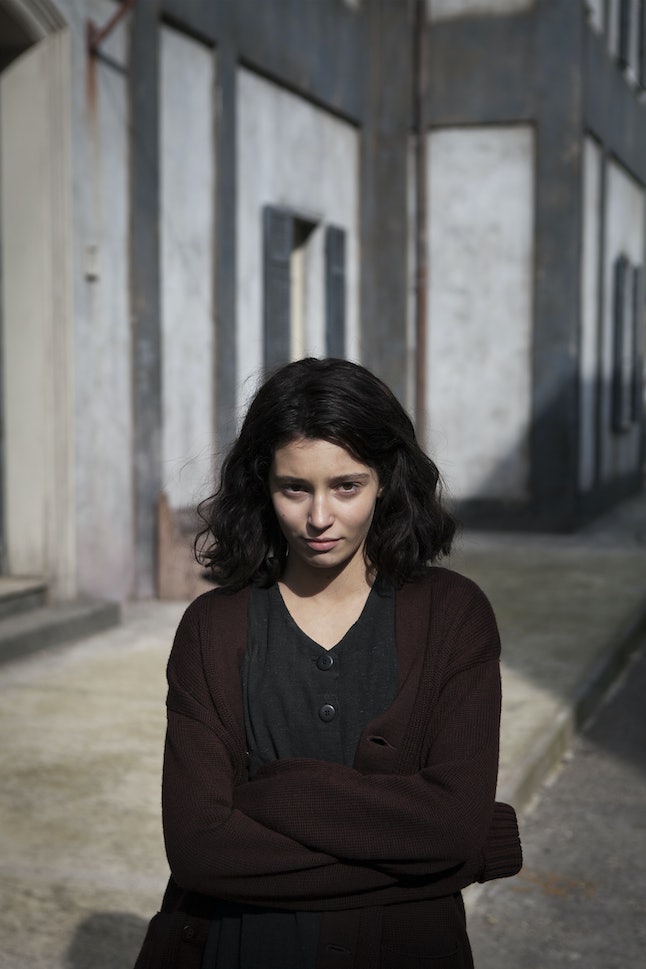 This idea of victim-blaming is further enforced by the Solara brothers, who’ve taken to picking up newly pubescent neighborhood girls in their car. The two boys approach a girl named Ada, telling her, "When men see you, they only think of one thing." Michele and Marcello ask if she’s wearing lipstick for them, but she replies, "No, because I like it." Although she protests, they force her to get into the car, telling how great she looks "all grown up." The neighborhood girls seem to think that what’s happening is perfectly normal. One friend is jealous, while Carmela assures Lila — the only one who voices her concerns — that they won’t hurt Ada. "They’ll hug her, kiss her, but they won’t hurt her," she says. "Actually, it’s nice."

Lila, however, is furious. "They take Ada, and we stay quiet, because they’re just going to kiss?" she exclaims, incredulous. Cerullo makes another good point, telling Lenu, "Pinuccia Carracci, who’s beautiful — they’ve never bothered her. You know why they act like this with Ada? Because she’s poor — she doesn’t count." In other words, poor girls like them are in a dangerous position, because the elder boys view them as an easy target because they literally do not matter in the grand scheme of things.

She goes on, "You don’t know anything: Of course they’ll hurt her!" "Those guys don’t just kiss — they bite like mad dogs. And instead [of] the little thingies boys have, they’ve got purple snakes that squirt poison in your belly." This naive explanation of sex and male genitalia is extremely dark, implying that sex is only violent and scary. And why should Lila believe anything different? After all, she’s only going off of what she knows of sex — that it’s something women are obligated to do with their husbands, the boys that ogle them, and that the outcome is usually pregnancy, which means only more poverty in their quartiere. 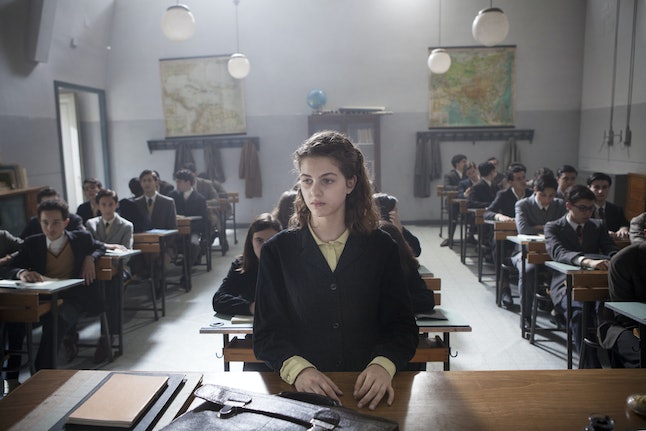 When the Solaras return with Ada, Lenu sees her friend through the car window, her face smudged with tears and lipstick. While it’s unclear whether Ada was raped or not, it’s obvious that she’s the victim in this situation. However, that doesn’t stop Michele and Marcello Solara from calling her a slut, and when her brother, Antonio, tries to defend Ada’s honor, they beat him up. (But he also slaps his sister, so let’s not give him too much credit). The neighborhood, however, turns a blind eye because the Solaras have money. Only Lila has the courage to stand up to them, much like she did Don Achille a few years earlier. When she and Elena catch the brothers’ eyes, she threatens Marcello (Elvis Esposito) with a rusty knife, and although he backs off, it’s clear that he’s enamored with her. Her rage seemingly turning him on, showing just how little power she actually has. Even defending herself, she can’t escape his predatory gaze.

Lenu and Lila are in a constant competition, and while their dynamic originally reared its ugly head out through their schoolwork, they’re starting to become sexual rivals, too. The Greco girl struggles with her self-image and is upset with herself for not excelling in Latin (which she later course-corrects). Lenu’s also devastated by her acne, and although adults keep telling her how beautiful she is, she refuses to believe it.

Despite the fact that Lila doesn’t seem to care or notice, virtually all of the boys are interested in her, including Pasquale Peluso (Eduardo Scarpetta), whose father arguably killed Don Achille. It’s clear that Elena’s interested in him, too, but he’s only got eyes for the shoemaker’s daughter. And while Lenu craves attention from the boys, she’s not exactly getting sweet declarations of love. Rather, Gino — the boy who paid her ten lire to show him and a friend her boobs — asks her to go steady. They barely know each other, but she reluctantly agrees, if only to get a boyfriend before Lila. It’s not just the girls against the boys here, but the girls clawing away at each other, too. It’s seems like such a lonely, terrifying way to live. 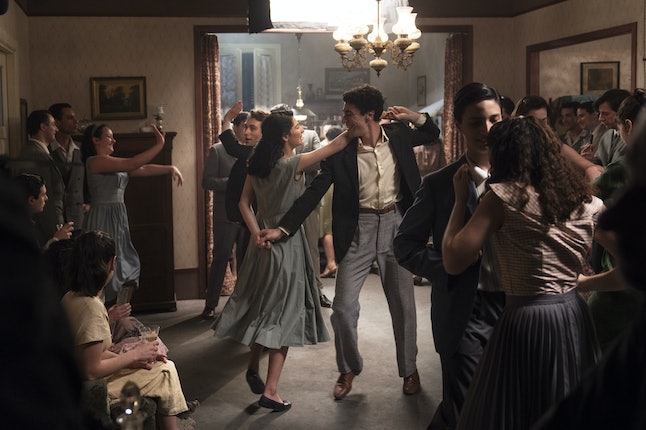 While it would be easy to call the events of Episodes 3 and 4 antiquated, don’t these things still happen today? While their womanhood should be something to be celebrated, both Lenu and Lila fear it because of what it represents — shame, a chore, and losing all of their agency or ability to make decisions for themselves.

Growing up can be terrifying; puberty uncomfortable, attention from boys scary and confusing. And on top of that, it’s important to keep in mind that girls often married young back in the ’50s, so marriage and kids just after your first period was not an abstract idea but a real possibility — given that their options limited to a small corner of Naples. 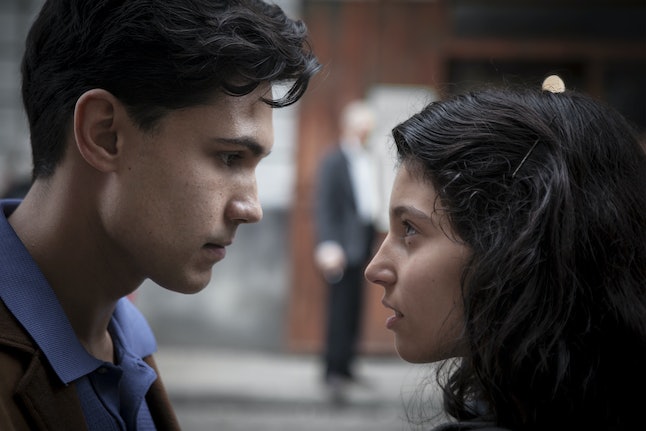 Once they married or had children, daydreaming about "getting out," whether it’s just to see the ocean for a day, or wanting to become a novelist is just over. Not to mention the sexual violence they face on the streets, knowing it’s just a matter of time they end up in the back of the Solaras’ Fiat, only to be called a whore by their brother, or slapped by their mother for losing their pad in the middle of the piazza. Why should they consider sex or a first period to be anything less than terrifying?

My Brilliant Friend is by no means a sex positive show, but neither was the world that Lila and Lenu grew up in. Like the fireworks set off at the end of Episode 4, their new bodies are both exciting and terrifying, beautiful and dangerous.