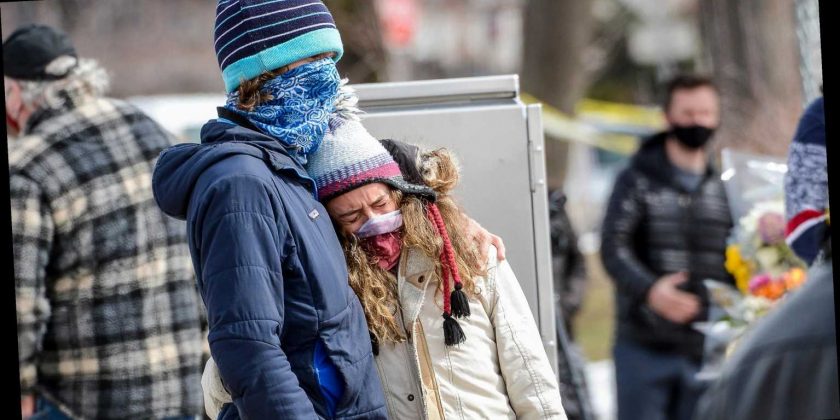 For one year, we stepped back from public life in fear of the virus. In doing so, we made ourselves less vulnerable to another threat: mass shootings in public spaces.

While data shows many forms of gun violence increased during the pandemic – gang violence, domestic incidents, retaliatory violence where perpetrators knew the victims – the number of shootings in public was the lowest it has been in a decade, according to the AP/USA TODAY/Northeastern University Mass Killing database. Now, as the nation inches closer to a return to “normal,” two mass shootings in less than a week are a reminder the threat of COVID is far from the nation’s only public health concern.

“There is something about these crimes that’s really a gut punch to people. You’re grocery shopping and it feels like if it can happen there, we’re all at risk, and I can’t wear a mask to protect myself from that,” said Jillian Peterson, a professor of criminal justice at Hamline University and co-founder of The Violence Project, a research center that tracks and studies gun violence.

As the pandemic eases, many people were already anxious about a return to public life. As out of control as COVID felt, many people understood if they wore masks and distanced they could play a role in their own safety. But many people feel helpless to protect themselves from the threat of a mass shooter. Every public space feels vulnerable – schools, concerts, grocery stores, places of worship.

‘We have to act’: Biden calls on Congress to move on gun control

While perpetrators are ultimately responsible for the violence they inflict, gun violence experts say research provides a number of actions society, institutions and individuals can take to help prevent mass shootings, which remain rare. That knowledge, Peterson said, can act as an antidote to helplessness.

“We’re acting like these are scary monsters and they just show up and the best we can do is run faster and hide,” Peterson said. “Our goal is to show the pathway for perpetrators so we can have real conversations about how we can prevent people earlier on. … After you understand something, it alleviates the anxiety because the truth is we can cut this off sooner.”

What we know about perpetrators

The Violence Project defines a mass shooting as four or more people killed in a public space where the perpetrator does not have a relationship with the victims, and Peterson said until last week there hasn’t been a shooting that met that criteria since March of 2020. According to USA TODAY research, mass killings of 10 or more people disappeared during the pandemic.

“It’s really striking,” Peterson said. “We haven’t been able to gather in mass, shooters have been out of the media so we’ve lost that contagion effect. I think there’s a number of us who were hoping maybe that would last, but now they appear to be emerging.”

Mass violence seems harder to control than the pandemic through individual action. But Peterson said The Violence Project’s research shows there are many similarities in perpetrator profiles that provide predictable entry points to cut someone off from violence. Data shows gun violence is disproportionately a male problem.

Mass shooters often develop a grievance with the world and find someone else to blame. They spend time on the Internet engaging with others who validate those grievances. Ultimately they acquire access to a chosen site to engage in mass violence. And they acquire the guns to do it.

“You can think about how you cut this off at any one of those points along the pathway,” Peterson said.

Experts say there are societal, institutional and individual actions people can take that would reduce the likelihood of mass shootings. At a societal level that may look like better access to mental health care and background checks. Institutionally, it may look like more suicide prevention training in workplaces and schools. And individually it may look like empowering people to spot someone in crisis.

Esther Baumann, left, hugs Fabrizio Giorgetta at a memorial outside a King Soopers grocery store where multiple people were killed during a shooting on March 23, 2021. (Photo: Michael Ciaglo, USA TODAY)

“We always look for motive. If it was a terrorist attack we say, ‘oh that’s it now we know why they did it.’ If it’s mental illness we say the same. But behind every terrorism case, behind every mental health case, there were lots of opportunities for intervention that were missed,” said James Densley, a professor of criminal justice at Metropolitan State University and co-founder of The Violence Project.

Individuals can spot signs. And they shouldn’t ignore them when they do.

Peterson said 80% of perpetrators show noticeable signs of crisis behavior. After mass shootings, people lament the warning signs that were missed, or the ones that were seen but never led to intervention.

Tyler Bayless, who lived with the accused Atlanta shooter for six months in 2019 and 2020 at Maverick Recovery Center in Roswell, Georgia, said he visited massage parlors and engaged in sexual acts, then expressed guilt because of his Christian faith.

“When I saw the headlines, my mind went straight to him,” Bayless said. “I always thought he’d do something, but I thought he would harm himself, not something like this.”

The shooter in Parkland, Florida, who killed 17 people was a troubled teenager who had been expelled from Marjory Stoneman Douglas High School for “disciplinary reasons” and posted disturbing material on social media before the shooting spree. One student said the shooter had been abusive to his girlfriend.

“People are noticing that something’s off,” Peterson said. “It’s easier to say in retrospect, of course.”

Managing our anxieties around the unknown

A 2019 Gallup poll found nearly half of Americans fear being the victim of a mass shooting and women consistently express greater worry than men.

“The cases scare people because it feels as though it can happen to anyone at anytime in any place. Even to you,” said James Alan Fox, a professor of criminology, law and public policy at Northeastern University.

Fox underscored that mass shootings remain rare, but the public’s anxieties can be influenced by media coverage.

“When you see video of people running and the sound of gunfire, what does that do for us? We know what gunfire sounds like. We know what people running looks like,” he said. “Those images frighten the viewer and play into the mindsets of people who would love to see their community look like that as long as they’re the ones holding the gun. Those videos are thrilling to some people and terrifying to others.”

While more than half a million American lives have been lost to COVID-19, the nation is on track to eventually resume public life where the threat of the virus no longer looms. Gun violence killed more than 40,000 people in 2020. Experts say a commitment to stem that epidemic appears less certain.

Domestic violence in the age of COVID: What happens when you’re stuck at home, but home isn’t safe?

“America wasn’t well before the pandemic and if we only focus on the pandemic that still doesn’t mean we fixed all the problems that were there before it. That’s the piece perhaps we lost sight of – that “normal” didn’t always mean good,” Densely said. “When we go back to normal if we’ve not changed anything we’ll go back to that baseline and that’s not necessarily going to be a happy place.”