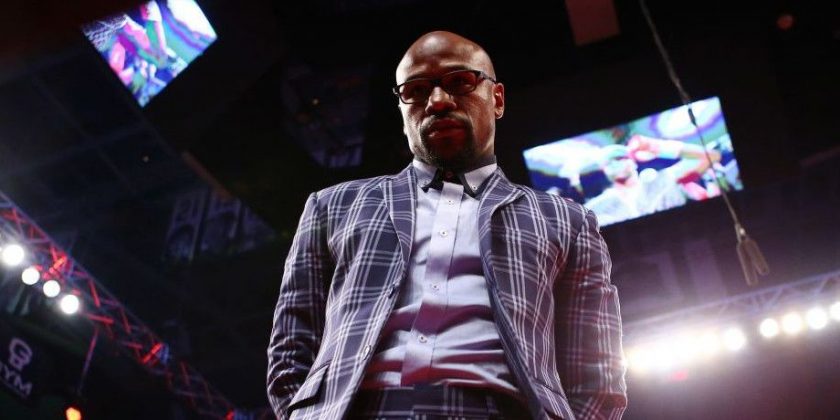 The 50-0 fighter said the only way he’d fight Khabib in a boxing ring is with boxing rules.

For fans who have been patiently waiting to see Floyd Mayweather in another crossover fight with an MMA competitor, the dream is still alive. This time, that fight would be against Khabib Nurmagomedov, and according to Mayweather, the fight would need to be a boxing match as he’s the “A side.”

TMZ Sports caught up with Mayweather, and of course, they asked him about whether he’s interested in a fight with Khabib. “Money” went off on the matter.

“They came to me talking about the Khabib fight,” Mayweather said to TMZ Sports, as transcribed by MMA Fighting. “Khabib called me out, I didn’t call Khabib out. They said it has to happen in the octagon and I said, ‘You just tell me where Khabib has made nine figures before in the octagon.’ If he hasn’t made nine figures, he’s not the A side. I’m the A side, so if you guys want the fight to happen, you must come my way. My way, my rules.”

Now that I am back on U.S. soil after a long and disappointing trip to Tokyo, I now have the time to address you, my fans and the media in regard to the upcoming event on December 31st that was recently announced. First and foremost, I want it to be clear that I, Floyd Mayweather, never agreed to an official bout with Tenshin Nasukawa. In fact (with all due respect) I have never heard of him until this recent trip to Japan. Ultimately, I was asked to participate in a 9 minute exhibition of 3 rounds with an opponent selected by the “Rizen Fighting Federation”. What I was originally informed of by Brent Johnson of “One Entertainment” was that this was to be an exhibition put on for a small group of wealthy spectators for a very large fee. This exhibition was previously arranged as a “Special Bout” purely for entertainment purposes with no intentions of being represented as an official fight card nor televised worldwide. Once I arrived to the press conference, my team and I were completely derailed by the new direction this event was going and we should have put a stop to it immediately. I want to sincerely apologize to my fans for the very misleading information that was announced during this press conference and I can assure you that I too was completely blindsided by the arrangements that were being made without my consent nor approval. For the sake of the several fans and attendees that flew in from all parts of the world to attend this past press conference, I was hesitant to create a huge disturbance by combating what was being said and for that I am truly sorry. I am a retired boxer that earns an unprecedented amount of money, globally, for appearances, speaking engagements and occasional small exhibitions.

When asked to elaborate on whether it needs to be a boxing match, Mayweather said, “Has to [be boxing]. My way, my rules. I’m Floyd ‘Money’ Mayweather. Even if it don’t happen, I’m comfortable. I’ve got a great life. Houses all over L.A. I’m retired and I’m still living a great life.”

For his part, Khabib has said he’s willing to box Mayweather, so that couldn’t prevent the fight from happening. What’s interesting about it, though, is that Khabib is known more as a grappler who beats his opponents on the ground. While Conor McGregor was an MMA fighter, his game is much more focused on fighting on the feet, specifically boxing, so the crossover seemed more competitive on paper.

Khabib’s team has gone on record looking for a $50 million fight, and the only opponent who could get them that kind of payday is Mayweather. From that perspective, the fight makes sense, at least for Nurmagomedov and his team.

A major stumbling block for the fight could be UFC President Dana White, as he’s not particularly interested in seeing the fight happen, as reported by MMA Fighting.

Mayweather is currently retired, but he’s expressed interest in coming back for the right fight. A fight with Nurmagomedov could be that fight, but after McGregor was handily defeated by Floyd, it’ll be interesting to see if a second MMA fighter versus boxer match draws as well as the first.

“Money” was announced for a fight in Japan but quickly backed out of that fight, as reported by Inquisitr. However, TMZ indicated that a matchup between the two may still be in the works, but it’ll be a three-round exhibition and not an actual sanctioned fight.