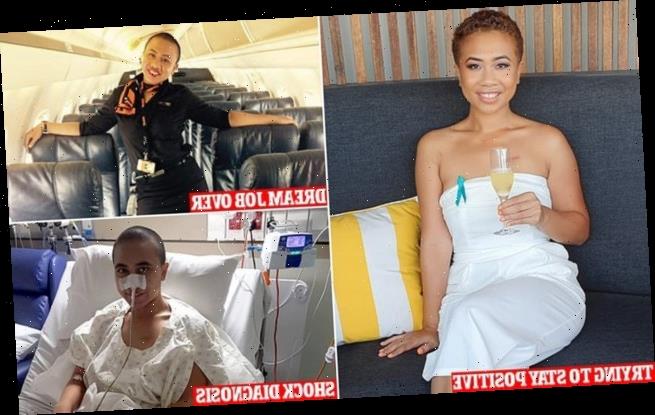 A young woman has revealed how her dream job working as a flight attendant was shattered after she was diagnosed with ovarian cancer.

Alisi Jack-Kaufusi, originally from New Zealand but who now lives in Brisbane, started experiencing bloating, exhaustion and bleeding but she dismissed the symptoms because she assumed she was ‘too young for any serious health concerns’.

But at just 24, she was given the ‘soul crushing news’ she had stage three ovarian cancer after scans found two tumours – one on each ovary – the size of grapefruits.

‘It felt like my life had been sucked out of me. I had to give up my dream and that was being a flight attendant and my life changed forever,’ Alisi, now aged 28, told Daily Mail Australia. 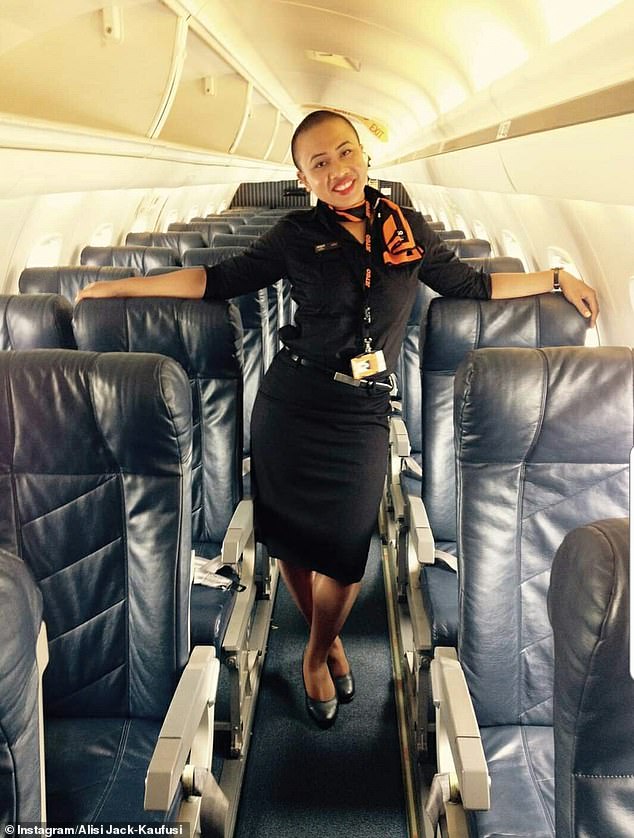 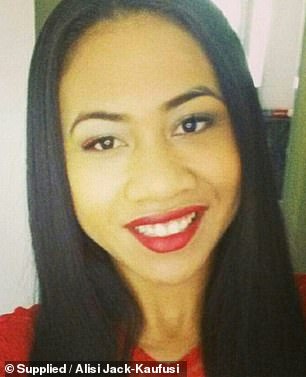 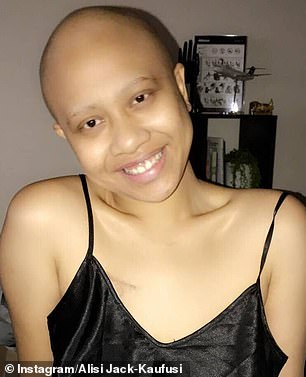 At just 24, Alisi was given the ‘soul crushing news’ she had stage three ovarian cancer after scans found two tumours – one on each ovary – the size of grapefruits (left before diagnosis and right after losing all her hair and eyebrows following chemotherapy) 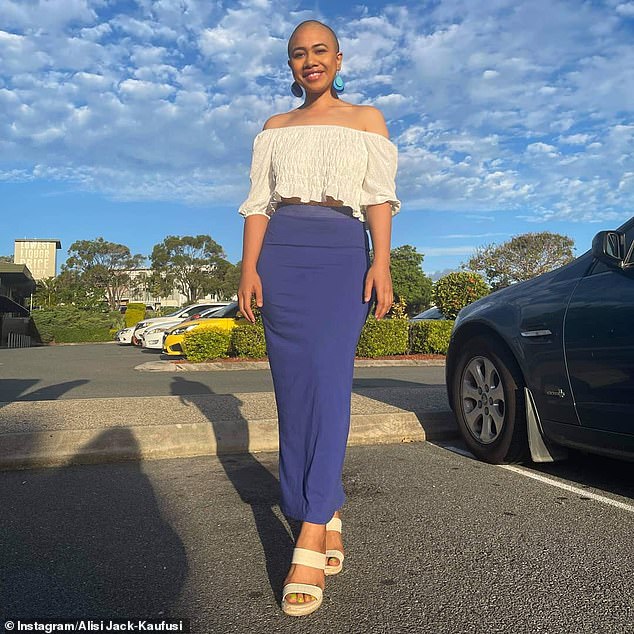 Her world came crashing down in late 2017 after being told she had the condition at such a young age, given the average age of women diagnosed with ovarian cancer is 64

There are often no obvious signs of ovarian cancer, but they include:

Before her diagnosis, Alisi experienced bloating in her lower abdomen area, she was tired ‘all the time’ and her menstrual cycle was ‘irregular’.

During a visit to see a GP in October 2017, she mentioned she had been experiencing bleeding for about a month and the blood was clotted and dark.

After getting multiple blood tests, MRI and a CT scan, the doctor booked her in to get a biopsy after they noticed ‘something blocking’ her ovaries.

Her world came crashing down in December 2017 after being told she had the condition at 24, given the average age of women diagnosed with ovarian cancer is 64.

‘Once I heard ovarian cancer, I looked at mum and froze. It felt like the room went silent and all I could see was the doctor’s mouth moving. It was all just a blur. I just remember saying to the doctor: “No, this can’t be because I am only 24, you have the wrong person”,’ Alisi recalled.

‘Being told by the medical team that I got this disease 30 years early was hard to process and still is. When you think cancer, you think old.’

By the time she was diagnosed, the cancer had spread outside her ovaries.

‘I had to have a full hysterectomy and unfortunately, they were unable to save any eggs. In your 20s, the last thing you think of is having to come terms with not being able to have your own biological children. I felt robbed,’ she said.

‘It feels like all my wishes and goals squeezed into a smaller time frame. I might not die tomorrow, but I may not live long enough to have long-term plans.’

Ovarian cancer is a malignant tumour in one or both ovaries.

The ovaries are made up of three main kinds of cells – epithelial cells, stromal cells and germ cells. Each of these cells can develop into a different type of tumour.

The average age of women when they are diagnosed with ovarian cancer is age 64. It is mainly diagnosed in women over the age of 50; however, there are cases diagnosed in younger women.

Alisi has undergone multiple rounds of chemotherapy – and every treatment led to ‘bad experiences’, she recalled.

‘I started to feel the effects afterwards, and it would worsen the next day. For two weeks I would just sleep but I had a loss of appetite so anything I ate tasted like metal due to the type of chemotherapy drug I had,’ she said.

Alisi said the biggest challenge was not knowing what her life looks like in the future after her cancer returned for the third time.

She was told the five year survival rate for ovarian cancer is 46 per cent.

‘It can be such a lonely and isolating feeling. You have all support around you but yet you can still feel lonely, and everyone thinks “great you beat it, you can get back to your old life”. That is far from the truth,’ she said.

‘You’re left with a body that you don’t trust and it doesn’t function like it used to. My life now involves scans, and appointments. After every scan and blood test that you’ve done you can’t help but wonder “is it back?”.

‘I live every day with the knowledge that my cancer can come back at any time which has proven twice in the past four years.’ 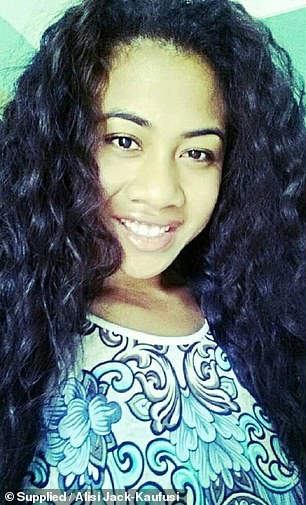 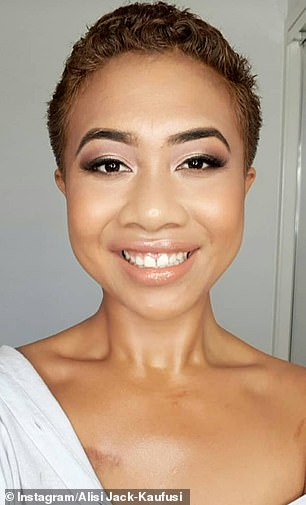 By sharing her story, Alisa wanted to remind other women suffering from cancer to just ‘take each day as it comes’ (left at age 20 before diagnosis and right after) 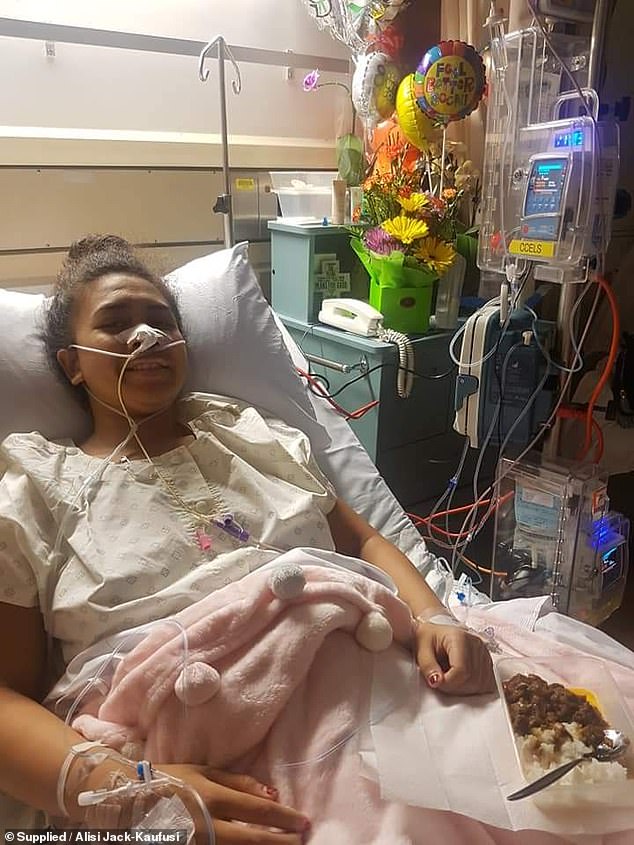 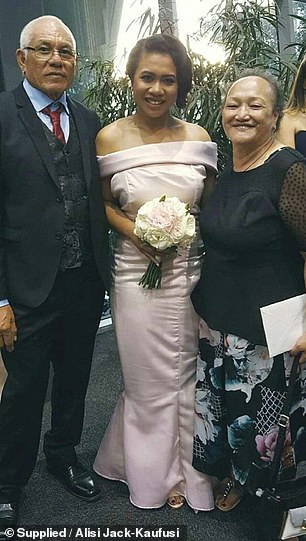 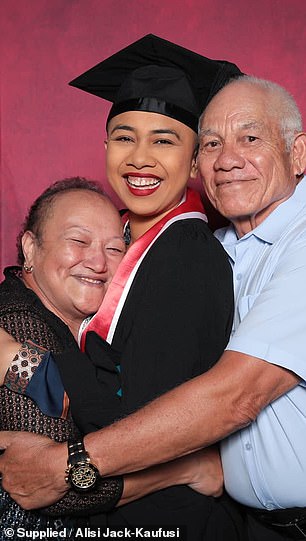 Alisi comes from a large Tongan family – and she’s one of six siblings. She was adopted at a young age to her auntie and uncle, who she now calls her parents (pictured together – left: before cancer and right: now). But she’s still close to her siblings and biological parents 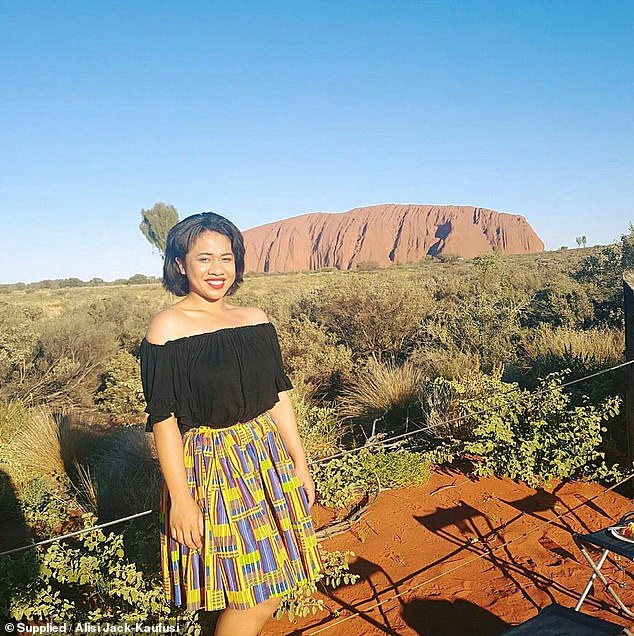 Alisi said she’s currently on a treatment called Tamoxifen – a drug used to prevent breast cancer in the hope it would suppress the cancer, which has since spread to her abdomen and bowel area.

‘If that does not work and the cancer continues to grow there is talk for a clinical trial and more chemotherapy,’ she said.

By sharing her story, Alisa wanted to remind other women suffering from cancer to just ‘take each day as it comes’.

‘My advice is to not compare your timeline to anyone else’s timeline – you are faced with the biggest battle and you may feel you are at a standstill,’ she said.

‘I have learnt that the body is an amazing machine despite what it has been through. We all are on borrowed time and we just don’t know what will happen tomorrow but we should live in the moment.’