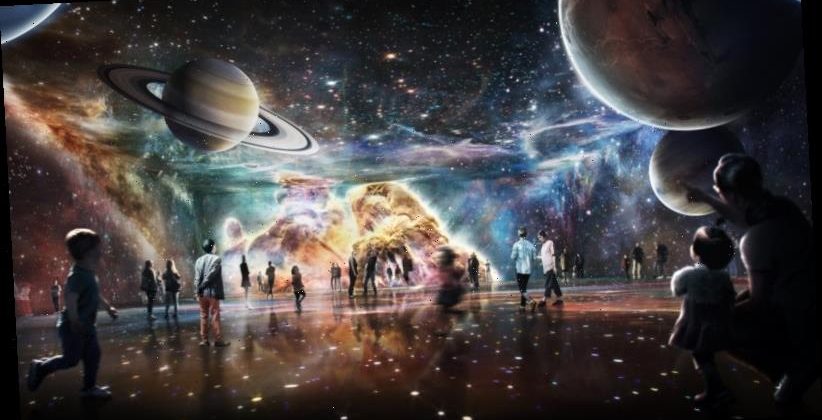 The public has been given its first glimpse inside the Parramatta Powerhouse, with new plans revealing some of the largest column-free exhibition spaces in Australia and a 360-degree immersive tour of the galaxy.

Three major construction firms – Multiplex, Lendlease and the builders of the Art Gallery of NSW's extension Sydney Modern, Richard Crookes – have been shortlisted for the contract to build the western Sydney headquarters of the Museum of Applied Arts and Sciences. 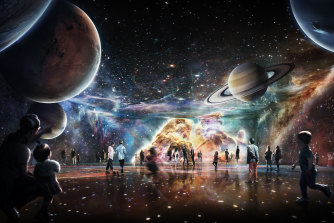 At the same time, the museum has named Indigenous astronomy, private space exploration, transport, agriculture and food science, and the interconnection between climate change and energy among the thematic priorities for the museum's program now in early development.

"That's really been our history collecting and exhibiting the great stories and ingenuity and innovation, and this is what this museum will do but in a whole range of different ways," chief executive Lisa Havilah said at the launch of a new shop front at Parramatta Square to share the museum's ambitions with the local community.

The year-long formal planning process for the new museum is almost complete with protests continuing to beset the NSW government's plan to dismantle and relocate the historic home Willow Grove to North Parramatta to make way for the new museum.

A union green ban remains in place on the riverside site that will be home to the Parramatta Powerhouse. The Department of Planning is expected to give final planning approval in early 2021. 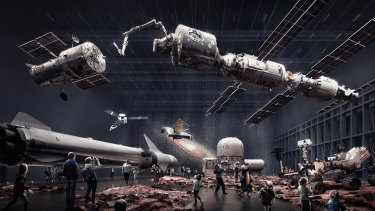 Artist impression of a presentation space inside the Parramatta Powerhouse. Indigenous astronomy and private space exploration have been highlighted as focuses of the gallery.

An Infrastructure NSW spokesperson said subject to approval, the first works will start early next year with the main works contract to be awarded later in 2021. The spokesperson said an assessment and archival recording of Willow Grove was underway to inform the dismantling and reconstruction of the former maternity hospital. The relocation of Willow Grove has also been subject to further design development, site selection assessments and planning approvals.

Meanwhile, planning has begun to develop a range of exhibitions for the new museum with early conversations underway with the Australian Space Agency.

Future collecting and exhibitions will focus on the rise of space programs in the Asia-Pacific region, as well as the miniaturisation and privatisation of space, and ongoing human exploration of the Moon, Mars, and beyond.

The building's exoskeleton provides for column-free exhibition space, among the largest in Australia, Ms Havilah said, with the most substantial of these at ground level in the eastern wing.

"It will be one of the largest exhibition spaces in the country," she said. "It can be both a lightbox and a black box, it has full climate control, it will have weight loadings that we'll be able to suspend aircraft, present trains really be able to present any of those large objects from our collection."

A completely immersive screen space – offering a multi-dimensional experience – will be designed by scientists and creatives to occupy one level of the western wing.

"The floor, walls, ceiling will be completely LED, it will be like walking into, in a very large scale way, another world whether it's walking into another hemisphere, or walking into the galaxy. We'll be able to have a fast-changing program because of the technology," Ms Havilah said.

Amid criticism that plans have been too vague about climate control levels, Ms Havilah said engineering and design consultants, Arup, had provided for climatic conditions that would allow international and interstate loans of items of significance.

The museum will also collaborate with scientists, First Nations agronomists and staff from the Royal Botanic Gardens to create a productive garden within a working research and education space on the building's roof.

A demonstration kitchen with space for 200 people will be built next to the garden. The museum six months ago established a culinary archive to collect the stories of the great chefs and producers of Australia.

"The history of market gardens in western Sydney is an incredible story of ingenuity. We are looking to that as one of the first incredible stories we want to tell here how those waves of new communities coming into western Sydney, being so entrepreneurial, but how that changed food culture and through those histories changed the food identity and broader cultural identity of Sydney and Australia," Ms Havilah said.

"At any given time there will be six different exhibitions happening at the museum so you will be able to come and have six different experiences whether they are international shows or local history shows, science or immersive screen."

Sue Frost, relieving deputy principal of Macarthur Girls High School and headteacher at Doonside Technology High School, said she hoped sitting the Parramatta Powerhouse in the heart of western Sydney would not only improve access for her charges but spur them to consider careers in technology and the sciences.

"It's about showing them how an interest, or a passion or a hobby that they've got in gaming or in science can actually turn into a career for them, that they can do what they love," Ms Frost said. "They are going to have to work for a very long time so they need to be doing something that they're passionate about, that's where they will be successful."