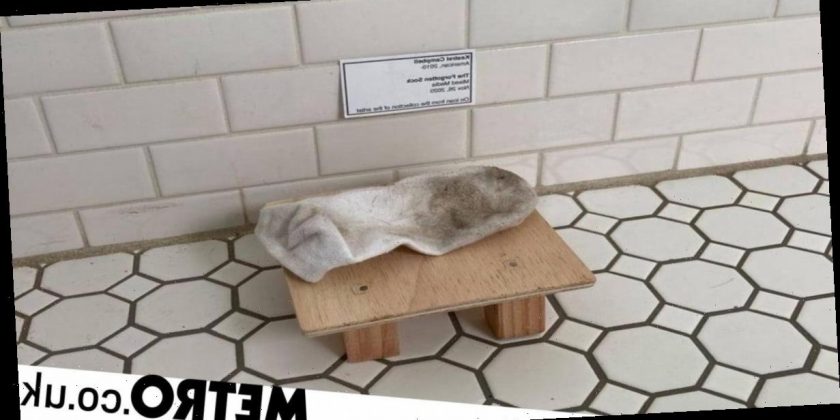 Like so many parents, mum Xep Campbell, 45, spends a lot of her time picking up other people’s dirty laundry from the floor.

And, again, like many parents, Xep was getting a bit fed up this daily task.

So when she came across a dirty sock her ten-year-old daughter, Kestrel, had left on the floor of the bathroom, she decided to get creative.

After the sock had been left untouched for six days, Xep planned to draw her daughter’s attention to the item of clothing – by turning it into an art exhibit.

Over the next few days, the site became a game of one-upmanship, with Xep and Kestrel adding toy animals and other accessories to the artwork in their bathroom in Washington, US.

Xep started by making a plinth, then found that Kestrel had made a miniature table.

Xep said: ‘I thought she would be annoyed at me, I was not expecting her to literally put it on a pedestal!’

Xep added some toy farm animals to the appreciate her artwork, and posted the picture online, which is when things ‘really escalated’.

Next, a miniature monolith appeared next to the original masterpiece, made of painted silver board.

The bathroom gallery was then given a seasonal flourish with some Christmas lights and other toy figurines turning it into a nativity scene.

Kestrel, Xep and her quietly appreciative husband Robert, 47, have since added more works of art across the skirting board, including a pirate ship and an increasing crowd of Playmobil art connoisseurs.

The growing exhibition has received thousands of likes and shares since her first post on December 3.

Now, the artwork is doing good, as Xep has used the online attention to call for donations to the Jumping Mouse Children’s Centre in Port Townsend.

She said: ‘The charity element was a bit spur of the moment; I was brushing my teeth ready for bed when the idea popped into my head after seeing their leaflet on the side earlier on so I went downstairs to write a post.

‘Last year I asked a friend involved in social action what charity would do the most with a small amount of money so I could make a donation and they recommended Jumping Mouse.

To donate to the cause, visit Jumping Mouse’s website.