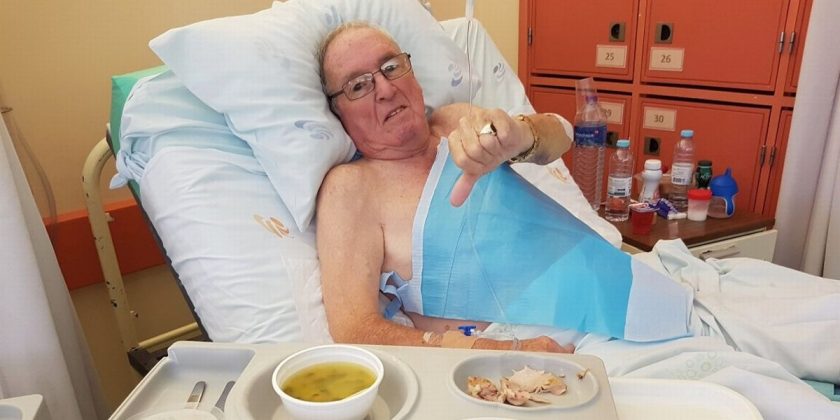 A British pensioner has been left bedridden in a Portuguese hospital after a holiday insurance company "abandoned" him following a horror collision, his family says.

David Lyndsay was hit by a van on a zebra crossing in Albufeira in the southern Algarve region of Portugal, leaving him with seven broken ribs, damage to his lung and a broken pelvis.

Mr Lyndsay, who was on holiday to celebrate his 57th wedding anniversary with wife Elizabeth, needs an air ambulance to fly home for further treatment in hospital.

But the 75-year-old is still in Portugal and has been shunned by insurance firm Mapfre Assistance despite having more than £2million of comprehensive medical cover, his daughter told the Daily Record.

Mr Lyndsay has been in hospital for almost a month and his health is deteriorating, his daughter Tracey White, 50, said.

Ms White, from Sauchie, Clackmannanshire, said: “With each day that passes, dad’s health is getting worse.

"He has been abandoned, despite being fully insured.

“His policy covers the costs of repatriation and we can’t understand why there’s no sign of the company flying him home.

"They are dragging their feet, despite having all the relevant paperwork.”

Ms White claims the family are being stonewalled by Mapfre Assistance as they demand to know when Mr Lyndsay will be flown home.

She added: “It’s disgusting the way we are being treated.

“There’s nothing more doctors can do but it seems like the firm are trying to buy time to find a way out of paying for the private transportation to bring dad home to Scotland.

“He isn’t well enough for a commercial flight – he can’t move his body because of the nature of the injuries he has suffered.

“He’s lucky to be alive and desperately wants home so doctors can assess what needs done and operate.

“We are at the hospital every day and hate going home at night. Dad’s barely eating and is staring at the ceiling all day.

“He’s now got an infection and I’m worried he’ll get worse. It’s heartbreaking seeing him so low.”

She added: “Every time I call, I’m fobbed off with excuses. I can’t get a straight answer and I’m exhausted with it all.

“The way they have treated dad is nothing short of disgraceful.”

Mr Lyndsay and his 74-year-old wife were celebrating their wedding anniversary on May 12 when he was hit by the van.

His daughter said: “My parents come here every year for their anniversary and they know the area well.

“Dad was going back to the hotel to get ready to go out for a meal and he was about three steps on to the zebra crossing when the van hit him.

“He was knocked over and couldn’t move. He was rushed to an emergency medical centre before being transferred to hospital.”

A company representative told the Daily Record that it doesn't have anyone who deals with media inquiries. The firm later said no-one was available for comment.