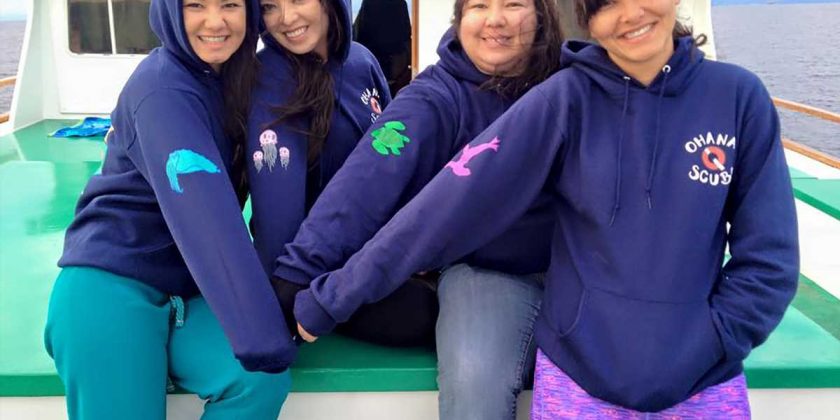 A family of five is believed to be among the victims who were killed in the commercial diving boat fire that tragically broke out early Monday morning on the tail end of a Labor Day weekend excursion.

The sisters’ mother, Susana Solano Rosas, confirmed on Tuesday that three of her daughters were missing in a heartbreaking Facebook post, writing, “It is with a broken heart … 3 of our daughters were on this boat. As of now they are still missing … Thank you to all of you for your support prayers and good wishes.”

Their suspected deaths were also confirmed in a series of GoFundMe pages for the family, set up by the daughters’ loved ones and former employers.

Middle daughter Nicole, 31, resided in Coronado near San Diego and worked in the city as a bartender at Nicky Rottens Bar and Burger.

Her boss Bryn Andrew described Nicole to PEOPLE as an adventurous person who loved the ocean and the beach, spent time with her golden retriever Peanut Butter, and enjoyed all water sports. He also noted how reliable and personable she was.

“We live in a beach town so I organized a beach clean-up, which Nicole did all the time. I asked everyone at the restaurant to participate and the only one who showed up was Nicole and Peanut Butter,” he recalls to PEOPLE.

“Peanut Butter ran up to me and jumped up and kissed me. I told Nicole I thought I’d be the only one here, and she said she would never desert me,” he continues. “And we cleaned up the beach for three hours.”

“She was the kind of person you met once and felt like you were related to her,” he adds.

The eldest of the sisters, Evan, worked as a nurse at St. Joseph’s Medical Center in Stockton, California.

Hospital officials confirmed Evan’s suspected death in a statement to PEOPLE, writing, “We were extremely saddened to learn the tragic news that one of our nurses was on board the Conception. Two former long-term staff members were also on board. We held a prayer gathering in our Chapel this morning to offer comfort and support to our hospital family. Our hearts go out to all the families and loved ones of those on board the Conception.”

Evan also worked for Kaiser Permanente with her father and stepmother, the healthcare company told PEOPLE.

“On behalf of Kaiser Permanente, we are so saddened by the tragic deaths of our colleagues Fernisa Sison, Michael Quitasol, and Evan Quitasol, along with all those aboard the Conception,” wrote Corwin Harper, Senior Vice President and Area Manager of Kaiser Permanente Central Valley service area, in a statement. “Our sympathies are with their family and friends at this time. We are providing support to those at Kaiser Permanente who are affected by this loss.”

As for Angela, the youngest of the trio, she worked at a middle school science teacher with the Lincoln Unified School district in Stockton, according to the Los Angeles Times.

The daughters’ stepfather Chris Rosa told the outlet that Angela was “great with kids” and was recently the maid of honor in her sister Evita’s wedding two weeks ago.

Rosa also added that the Quitasols were “the most kind, most loving people I’ve ever met — and I’m not just saying that because they’re family. The way they interacted with anyone they came across, they were wonderful.”

“They were outstanding girls,” he told the Los Angeles Times of the daughters.

Following the heartbreaking news, the Quitasols’ loved ones rushed to social media to paid tribute to the sisters and express their condolences over the “unimaginable tragedy.”

“Nicole has worked with our Nicky Rottens Coronado family for years, and she will be remembered as an adventurous & loving soul. Our hearts are broken and we can’t imagine the pain her family feels,” Andrew wrote on the GoFundMe.

Venture Active founder Ciara Guedesse created her own fundraiser for Nicole and wrote on the page, “She was a VA family member and a dear friend. Her adventurous spirit, kindness, sense of humor and beauty will live on through all who had the pleasure to know her.”

“Nicole Quitasol on behalf of your Venture family- We love you so much and we will continue to live life to the fullest and appreciate the beauty in this world just as you did. Thank you for allowing us to be a part of your journey,” Guedesse added. “This has been a terrible 24 hours for all who knew and loved her.”

Guedesse also announced that she would be setting up a celebration of life for her friend, which would consist of a sunrise hike, yoga, and paddle-boarding at sunset — three of Nicole’s favorite things to do, she said.

“Port City would like to extend our heartfelt thoughts and prayers to the family of our former skater Angela Rose aka Hermione Danger, two of her sisters, their father and stepmother, were amongst those aboard the boat affected by fire near Santa Cruz Island,” the organization wrote.

“As of now Angela is still missing. Our thoughts are with her biggest fan and proud Port City supporter, her Mother Susana as well as her Sister Christina who also skated with us, as they continue to search for their family members. Godspeed,” they finished.

After the fire broke out on Monday, the five crew members who were awake managed to jump ship and seek refuge on a nearby boat called the Grape Escape, which they traveled to via dinghy.

20 bodies, 11 female and nine male, were recovered Monday, and have been brought back to the coroner’s bureau, Santa Barbara County’s Sheriff-Coroner Bill Brown said at a press conference Tuesday.

An additional four to six bodies were seen by search and rescue divers, though the positioning of the sunken boat made them unable to reach the victims by nightfall.

Authorities have yet to identify the victims, though Brown said that a majority were from Santa Cruz, San Jose and the Bay Area.

Truth Aquatics, which owns the Conception, has not commented.